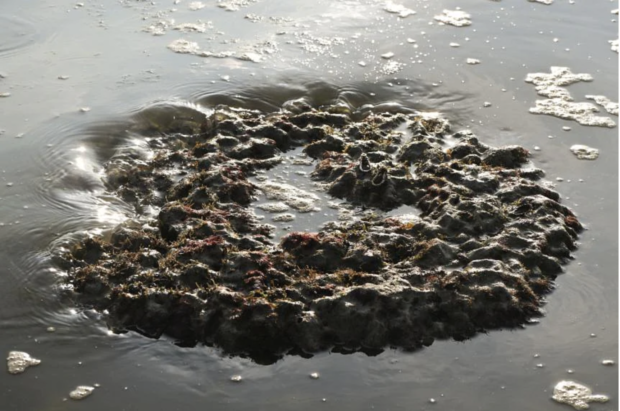 A coral microatoll before being submerged by the rising tide water at Sentosa on May 18, 2022 The Straits Times/Asia News Network

SINGAPORE — They look like flat, bumpy undersea rocks covered in seagrass. But beneath the camouflage lies coral microatolls — discovered during the pandemic off the Sentosa coast — that may give scientists some insight as to how sea levels may rise in Singapore.

The coral microatolls there — which range from a few decades old to a few thousand years old — are circular colonies of coral with dead flat tops and living tissue around the perimeters.

The fossil coral microatolls discovered in Sentosa are between 1,000 and 3,000 years old and researchers say they can provide useful data on Singapore’s sea level history, from a time long before tide gauge records existed.

The lack of sufficient historical data therefore makes it difficult for scientists to accurately predict future sea level rise in a given location or region.

Assistant Professor Aron Meltzner from the Nanyang Technological University’s Earth Observatory of Singapore (EOS), said that the microatolls in Sentosa had been an “accidental discovery” in July 2020, in part due to the COVID-19 pandemic, when border restrictions rendered access to survey sites in Indonesia, Philippines, and Malaysia difficult.

Prof. Meltzner and his team have been studying coral microatolls in various Southeast Asian countries — including Singapore — to determine the region’s sea level histories.

“Sea level change is very complex. It is not simply a matter of filling up a bathtub and watching the water uniformly rise in elevation … Some processes could cause the surface of the water to rise higher in one place, while other processes, such as earthquakes, could cause the land to move up and down,” said Prof. Meltzner.

Having data at multiple locations in Southeast Asia — including Singapore — could therefore help the researchers to piece together the likely reasons for sea level change in each area, and therefore make better predictions for future sea level changes.

Already, coral microatolls found in Mapur Island in Indonesia, had shown that sea level rise in Singapore was slower than the global average from 1915 to 1990 — and taking away anthropogenic factors such as the burning of fossil fuels and deforestation — would have meant that sea level in Singapore would have been essentially stable, or even slightly falling, said Jedrzej Majewski, who was the lead author of the study there.

He told The Straits Times in March that this data helped the researchers to narrow down the probable sea levels in Singapore by over 40% for earlier periods, and about 30% for the more recent period of time.

And in Singapore, members of Prof. Meltzner’s research group at EOS, including PhD student Tan Fang Yi, are slowly piecing together the country’s sea level history by looking at coral microatolls in the Southern Islands — which include Lazarus Island, Sentosa, St John’s Island, Pulau Tekukor, and more.

The secret to these corals, however, lie in how they are formed.

The corals usually start growing sideways below the intertidal zone where they remain completely submerged even at low tide.

However, corals can begin to take a unique form when the top part of the structure gets exposed to air.

This usually happens when the corals grow tall enough, or when the relative sea level falls such that their surface is constantly exposed to air.

This causes the topmost part of the colony to die, so they stop growing upwards.

However, the rest of the coral tissue that remains submerged in water will continue to grow sideways.

While the fossil coral microatolls at Sentosa are between 1,000 to 3,000 years old, the ones at Lazarus Island and Pulau Tekukor are much older, at around 7,000 years old, said Tan.

“I think what’s unique about the Sentosa corals is that we have younger fossil corals compared to other sites that we have found in Singapore. So we’re able to fill in a part of the historical time period where there isn’t a lot of data available at the moment,” said Tan.

So far, data from the fossil corals have shown that sea level has been falling slightly from the past 3,000 years or so. However, a look at the living corals — which are about a few decades old — indicates modern sea level rise, she noted.

To study the microatolls found on these islands, one would need to determine their age and elevation.

Small core samples of the microatolls will also be collected for radiocarbon dating — a method used to determine the corals’ estimated age, said Tan.

The fossil coral microatolls were found at higher elevation, compared to the living microatolls. This means that sea level was slightly higher in the past, then fell over time, said Tan.

In order to get clear images of the microatolls, the research team had to scrub its surface to remove sediments that have accumulated on it over time.

The photographs of the microatolls will then be used to create 3D models of the corals, which can be used to analyze their shape outside of field work, without being constrained by the short hours of low tides.

The research team had just over an hour during low tide to do their sampling work — by around 8:15 a.m, the tide started to come in and the coral microatolls gradually began disappearing into the water.

Low tide usually occurs only two to three times a month in the day from May to June, and the tide prediction data on May 18 had suggested that the tide was possibly the lowest in 14 years.

“It was actually only my second time today seeing two of the fossil microatolls that we were surveying, despite coming back every month to do field work. The last time I saw the two corals was around June last year,” said Tan.