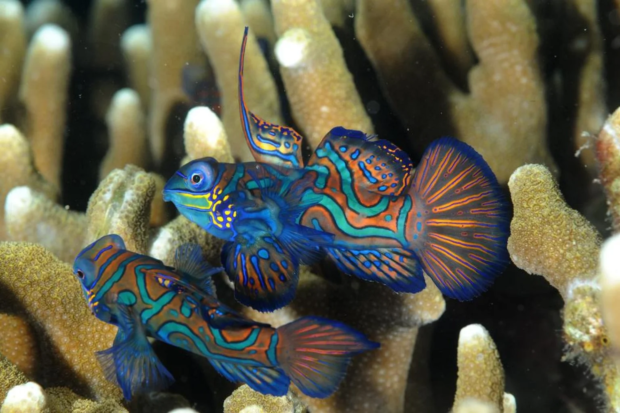 SINGAPORE — A pair of mandarin fish – colorful reef fish known among scuba divers for their exotic mating dances in the moonlight – has been spotted for the first time in Singapore.

The fish species is not known to be found naturally in Singapore, although it does occur in nearby waters, such as in the Philippines, as well as in Borneo and Java in Indonesia.

Fish scientists The Straits Times spoke to on Tuesday (June 21) think it is likely that the pair was released from the aquarium trade.

Hospital care coordinator Venus Tan, 49, spotted the two mandarin dragonets (Synchiropus splendidus) at One°15 Marina on Sentosa while on a leisure dive there at about 5.30pm on April 22.

Speaking to The Straits Times over the phone on Tuesday (June 21), Ms Tan said: “I had not used my camera for some time, so I was hovering near some stones on the seabed, trying to adjust the settings, when I saw a dark shape moving in and out of the rubble.”

Visibility that day was not great, Ms Tan said.

She slowly drifted closer to the rock pile, trying not to spook the fish, and shone a faint beam of light from her dive torch on the rubble. That was when she saw flashes of the mandarin fish’s signature colouring – wavy patterns of bright blue and orange.

“My first thought was: Isn’t that a mandarin fish? I quickly set up my camera and got a few shots,” said Ms Tan. 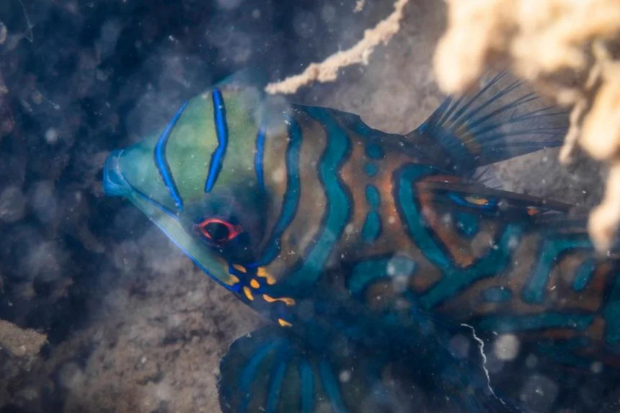 Mandarin dragonet species is not known to be found naturally in the Republic. | PHOTO: VENUS TAN via The Straits Times/Asia News Network

There were two of them, she added, although she did not witness them doing their mating dance.

The courtship ritual between mating pairs of mandarin fish is a sight to behold. The spectacle usually takes place after sunset, when females gather to watch males perform a dance.

If the female likes a male she will join him by resting on his pelvic fin and as they float above the reef they will spawn, releasing a cloud of eggs and sperm,” says the Smithsonian National Museum of Natural History on its website.

The observation was published as a biodiversity record in the scientific journal Nature In Singapore on May 31.

Dr Jaafar, who suspects that the two fish were released from the aquarium trade, said the fish are assumed to be a breeding pair.

Asked if the two could eventually start a population in Singapore, she said: “They may lay eggs and the eggs may be fertilized. But the larvae are planktonic (free-floating) so they would have to return to the area when they become juveniles. Many ifs!”

There is evidence that fish from the aquarium trade, when released into natural environments where they are not usually found, have disrupted local ecosystems. 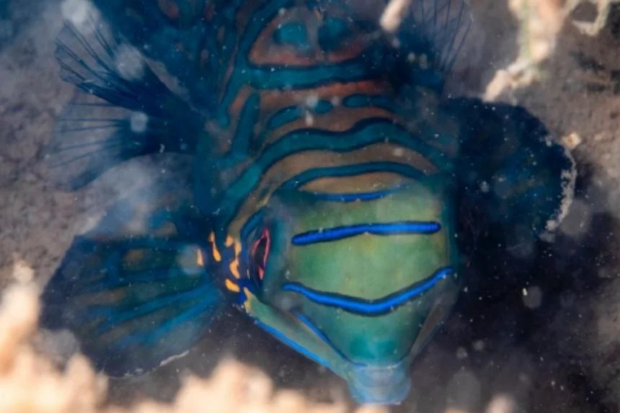 Ms Venus Tan spotted the two mandarin dragonets at the One°15 Marina on Sentosa at about 5.30pm on April 22, 2022. | PHOTO: VENUS TAN via The Straits Times/Asia News Network

In the western north Atlantic region, populations of introduced lionfish – a predatory fish native to the Indo-Pacific region – have swelled dramatically, and are harming native coral reef ecosystems in the Atlantic, Gulf of Mexico and the Caribbean Sea.

Adult lionfish eat other fish and have very few predators outside of their home range.

Researchers have discovered that a single lionfish residing on a coral reef can reduce recruitment of native reef fish by 79 percent, said the United States’ National Oceanic and Atmospheric Administration.

Dr Tan Heok Hui, a fish scientist at the NUS Lee Kong Chian Natural History Museum, said it is unlikely that the mandarin fish could have such an impact on local waters, as they may end up as food for local resident predators instead.

Still, he cautioned that introducing non-native species into Singapore’s marine environment could have other harmful impacts.

Dr Tan said: “There are far more impacts than one can see immediately. There is also the potential spread of disease. If they mate with other closely related species in Singapore waters, there is also the possibility of hybridisation and weakening of the local gene pool.”

From foes to friends of tropical fish