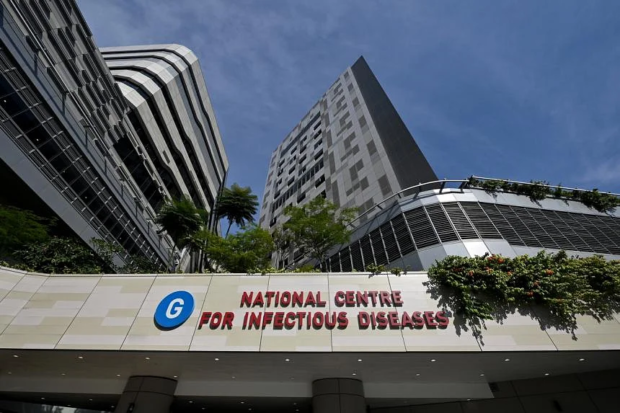 The patient, a 42-year-old British man who works as a flight attendant, is currently warded at NCID. The Straits Times/Asia News Network

SINGAPORE – The Ministry of Health (MOH) of Singapore has confirmed an imported case of monkeypox.

The patient is a 42-year-old British man who works as a flight attendant and was in Singapore between last Wednesday and last Friday (June 15 and 17) and again on Sunday as he flew in and out of the country, said MOH on Tuesday night.

He tested positive for monkeypox on Monday and is currently warded at the National Center for Infectious Diseases (NCID).

His condition is stable, said MOH, adding that contact tracing is ongoing.

Thirteen close contacts have been identified as at Tuesday.

All close contacts will be placed on quarantine for 21 days since their last contact with the patient.

Those under phone surveillance will receive daily phone calls during a 21-day period to monitor for any onset of symptoms.

If they are suspected of being infected, they will immediately be taken to the NCID for further evaluation and isolation to prevent further transmission.

This is the first imported monkeypox infection detected in Singapore since 2019, when a Nigerian man tested positive.

MOH also said on June 6 that a traveler who transited through Singapore to Australia the week before had tested positive for monkeypox.

Giving more details about the latest imported case, MOH said the man started to have a headache on June 14 and had a fever two days later.

These symptoms subsequently resolved, but he then developed rashes on his skin on Sunday, said MOH.

He sought medical attention via teleconsultation that night and was taken to the NCID the next day for further assessment.

MOH said contact tracing is ongoing for the affected flights and for the duration of his stay in Singapore.

“During this period, he had largely remained in his hotel room, except to visit a massage establishment and eat at three food establishments on June 16.

“In general, the risk of transmission to visitors at these locations is low, as data has shown that monkeypox transmits through close physical or prolonged contact. All four locations visited by the case are undergoing cleaning and disinfection,” said the ministry.

Most patients recover within two to three weeks, said MOH, but the virus can cause serious complications in some cases.

Individuals who are at higher risk of severe illness include young children, pregnant women or immunocompromised individuals.

Human-to-human transmission is generally uncommon but it can occur via exposure to respiratory droplets or direct physical contact with blood, body fluid or lesion material from infected individuals or contaminated materials.

The incubation period ranges from five to 21 days.

Those affected are generally infectious from the onset of fever until the skin lesions have scabbed over.

MOH urged members of the public, especially travellers, to be vigilant and maintain a high standard of personal hygiene, including washing their hands frequently after going to the toilet or when their hands are soiled.

They should seek immediate medical attention if they develop any disease symptoms – such as the sudden onset of high fever, swollen lymph nodes and rash – that are compatible with monkeypox, and they should inform their doctor of their recent travel history.