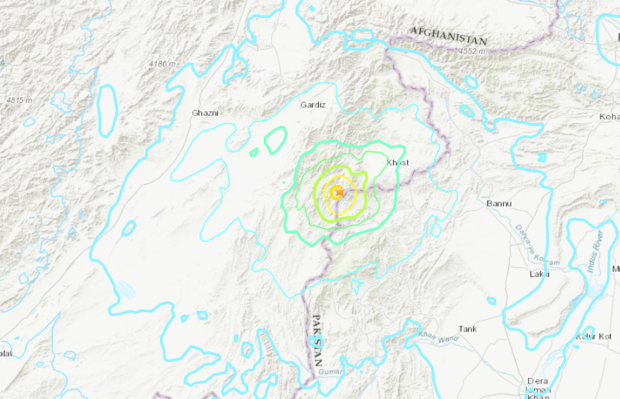 An earthquake of magnitude 6.1 shook parts of densely-populated Afghanistan and Pakistan during the early hours of Wednesday, the U.S. Geological Survey (USGS) said.

The quake struck about 44 km (27 miles) from the city of Khost in southeastern Afghanistan and was at a depth of 51 km, according to the USGS.

There were no immediate reports of damage or deaths.

Shaking was felt over a range of some 500 km by about 119 million people in Pakistan, Afghanistan and India, the European Mediterranean Seismological Centre (EMSC) said in a tweet.

It was felt in Afghanistan’s capital Kabul as well as Pakistan’s capital Islamabad, according to witness accounts posted on the EMSC website and by users on Twitter.

Read Next
Singapore confirms imported monkeypox case; 13 close contacts identified
EDITORS' PICK
Pagasa: Warm, sunny Sunday in most parts of PH
Is it safe to talk politics again at family gatherings? ‘The Reconciliation Dinner’ shows us what that’s like
House energy committee chair Arroyo bats for cheap electricity
EDITORIAL: To a bike-friendly future
The Best Tech Gifts For The 2022 Holidays
vivo’s coming to town to grant wishes with more holiday promos
MOST READ
LOOK: Vhong Navarro transferred to BJMP detention facility in Taguig
The Elephant Man in the Senate
Posh village as ‘shabu’ haven
LOOK: Zanjoe Marudo bonds with Ria Atayde, her family
Don't miss out on the latest news and information.