US to get 36,000 more monkeypox vaccine doses this week, HHS says | Inquirer News 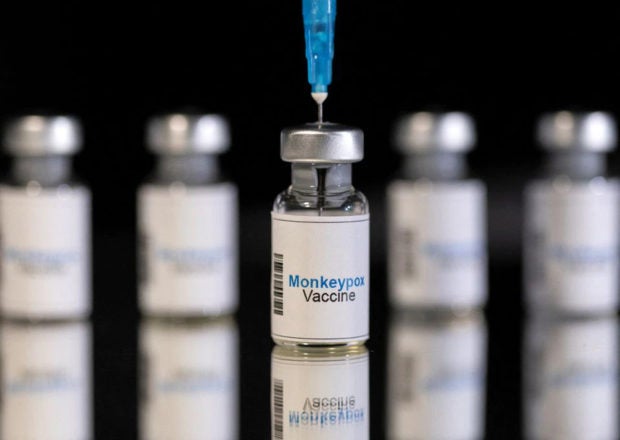 Mock-up vials labeled “Monkeypox vaccine” and medical syringe are seen in this illustration taken, May 25, 2022. REUTERS

The Department of Health and Human Services (HHS) said on Monday it had instructed monkeypox vaccine manufacturer Bavarian Nordic to deliver an additional 36,000 doses this week as part of a drawdown from a U.S. vaccine stockpile.

In a statement, HHS said the doses will be added to the existing 36,000 in the U.S. Strategic National Stockpile.

Bavarian Nordic’s vaccine, called Jynneos, is approved to treat both monkeypox and smallpox.

The Danish company, which developed the vaccine with the support of HHS’ Biomedical Advanced Research and Development Authority, still has more than 1 million government-owned doses of the vaccine on hand. Another 16.4 million doses of vaccine could be finished if needed, HHS said.

During a news briefing last week, HHS official Dawn O’Connell said Bavarian Nordic can store the vaccine at a lower temperature than is possible once in the stockpile, extending the vaccine’s shelf life by about two years.

In addition to the Bavarian Nordic vaccine, the United States has more than 100 million doses of ACAM2000, a smallpox vaccine from Emergent BioSolutions Inc (EBS.N), that is also effective against monkeypox.

As of June 3, the government has delivered about 1,200 vaccines and 100 courses of treatment within the United States.

The United States has so far 25 confirmed cases of monkeypox, according to the Centers for Disease Control and Prevention. The agency on Friday urged U.S. doctors to test for monkeypox if they suspect cases, saying there may be community-level spread but that the overall public health risk remained low.

Around 30 countries where monkeypox is not endemic have reported outbreaks of the viral disease, with more than 911 confirmed or suspected cases mostly in Europe, according to the World Health Organization, Reuters reporting and local data.

Read Next
Tourism rebounds in Portugal from pandelic slump, but return to record unlikely
EDITORS' PICK
Lawmakers eyeing more changes in Maharlika plan
How not to retire as an ex-president
Hidilyn Diaz wins only gold missing from her collection
Shop smarter with vivo’s big 12.12 holiday deals
The vivo Y02 is now available in the Philippines for only PHP 5,299
House energy committee chair Arroyo bats for cheap electricity
MOST READ
Jovit Baldivino, ‘Pilipinas Got Talent’ winner, dies at 29
LPA enters PAR, to likely strengthen into tropical depression in coming days – Pagasa
Andi Eigenmann, family in Manila for a quick visit; Ellie dines with grandma Jaclyn Jose
11 Filipino imports named to Japan B.League Asian All-Star team
Don't miss out on the latest news and information.