Experts: No need to be scared of monkeypox | Inquirer News
Close
menu
search 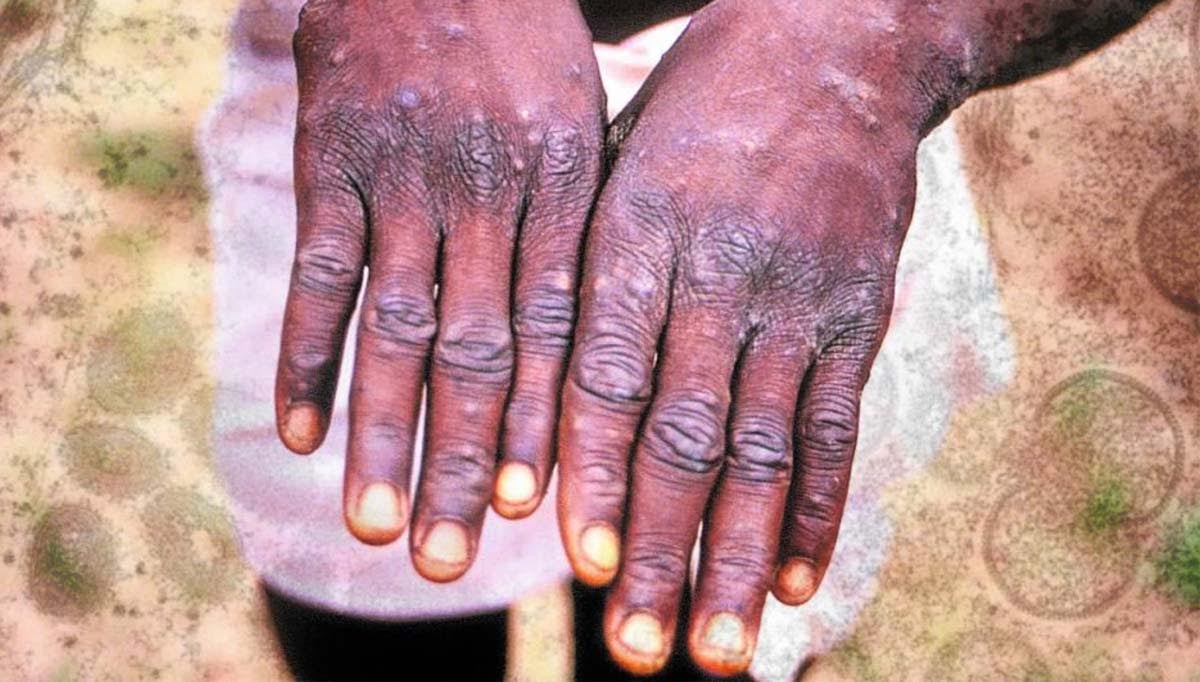 MANILA, Philippines—The health department has assured the public that there has been no confirmed or suspected case of monkeypox—a type of viral infection common in West and Central Africa—yet reported in the Philippines. 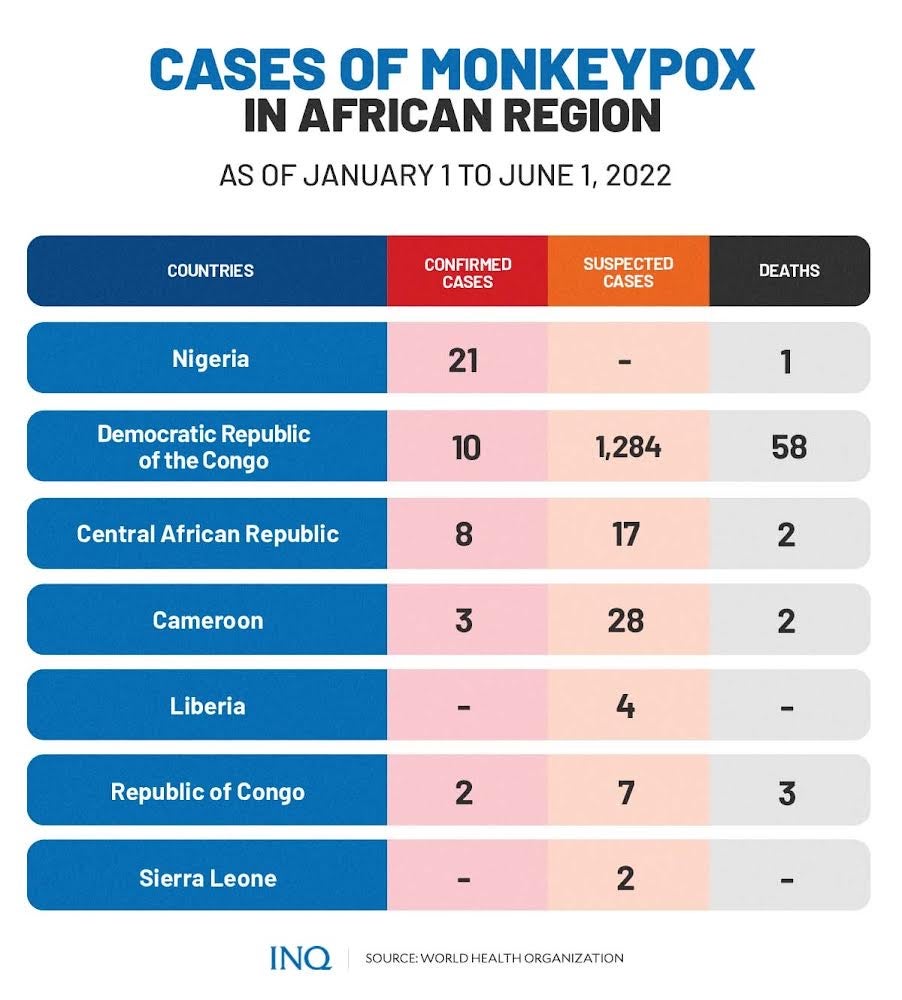 With 760 laboratory-confirmed cases reported to World Health Organization (WHO), an outbreak has been declared in non-endemic countries, including the United States (US), United Kingdom of Great Britain (UK), Northern Ireland, Spain, Portugal, Canada, and many more.

READ: Monkeypox: What to know amid unusual rise in cases

Despite the rise in cases, WHO said that monkeypox currently presents a “moderate risk” to overall public health since the cases were reported in countries where the disease is not typically found.

While the Philippine government has yet to detect or record a case of monkeypox in the country, concerns begin to grow, pushing some to raise questions on whether the country is prepared for a monkeypox outbreak.

According to epidemiologist Dr. Enrique Tayag, “a single confirmed case in a country where monkeypox is not endemic is already considered an outbreak.”

In several countries across the globe with monkeypox outbreaks, laboratory-confirmed cases continue to increase, with more suspected cases under investigation by health experts and WHO. 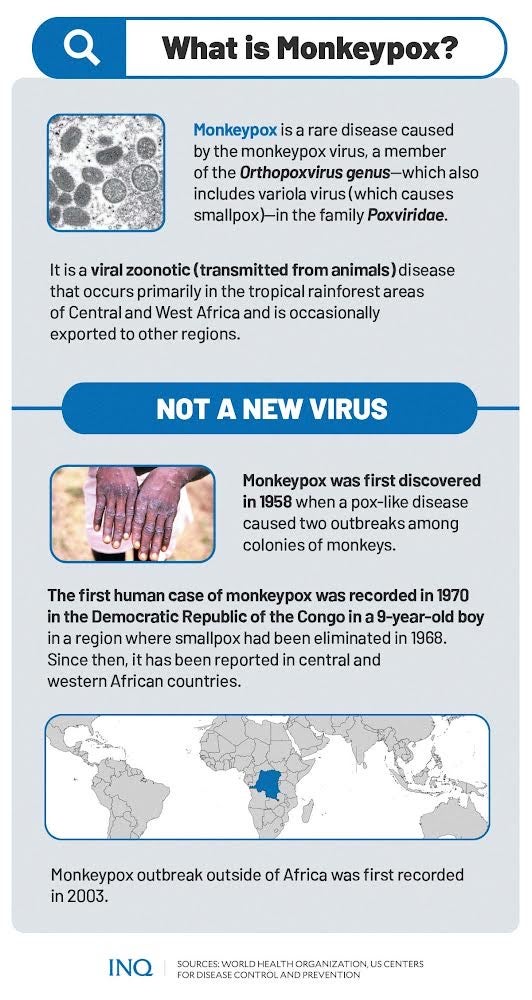 Although health experts in the Philippines have yet to detect the presence of the monkeypox virus in the country, some have raised the question about whether the government is prepared enough to prevent the spread of the disease once it enters the country.

As it turns out, the country’s COVID-19 pandemic response can help prevent the spread of the viral disease if it enters the country.

“We have a three-year drill for wearing masks and that will actually help a lot,” Tayag said at an online forum hosted by the University of the Philippines (UP), UP Manila NIH National Telehealth Center, and UP Philippine General Hospital (PGH).

Dr. Joseph Adrian Buensalido, a clinical associate professor at the UP PGH, also noted that the country has already been practicing preventive measures which can be applied in case of a monkeypox outbreak.

“We are already used to it. We already have the tools and we have been performing and using these tools—[including] wearing masks, [maintaining proper] hygiene, and keeping distance from people we do not know,” he said during the same online forum.

“All of these will continue to help us,” Buensalido added. 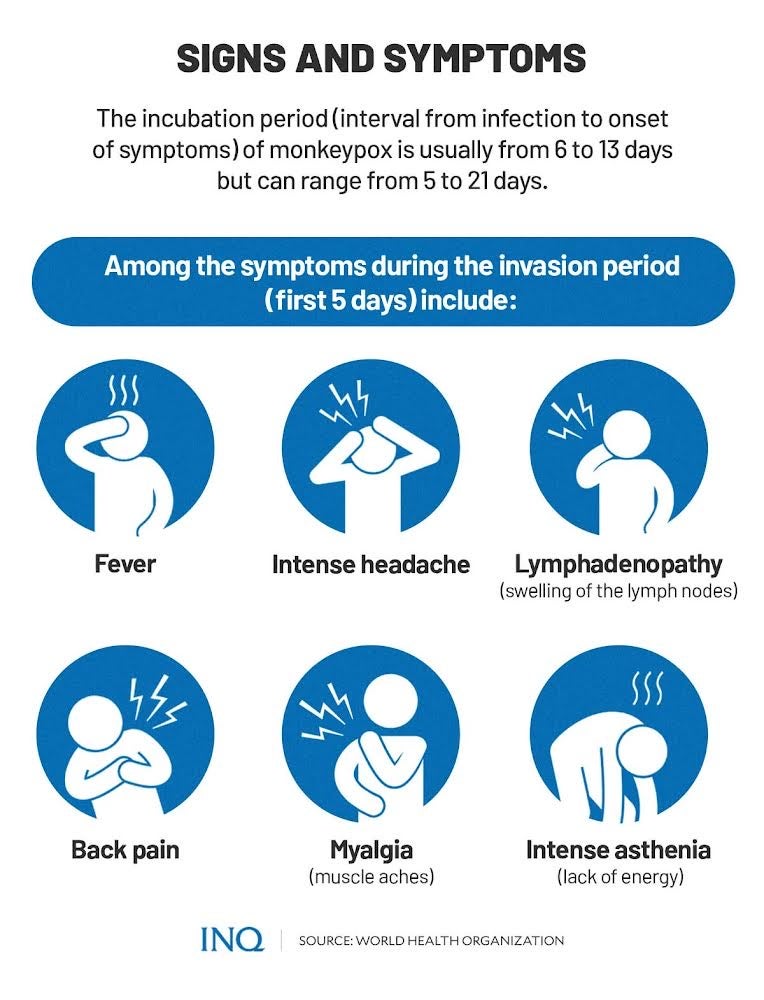 According to the US Centers for Disease Prevention and Control (CDC), there are several preventive measures against the spread of monkeypox virus, such as:

Maintaining basic health protocols—which the country has been following during the COVID-19 pandemic—will also help slow down the reproduction rate of the monkeypox virus, according to Buensalido.

Director Beverly Ho, of the Disease Prevention and Control Bureau, explained that a “four-door strategy” would be implemented should cases of monkeypox be detected in the country. 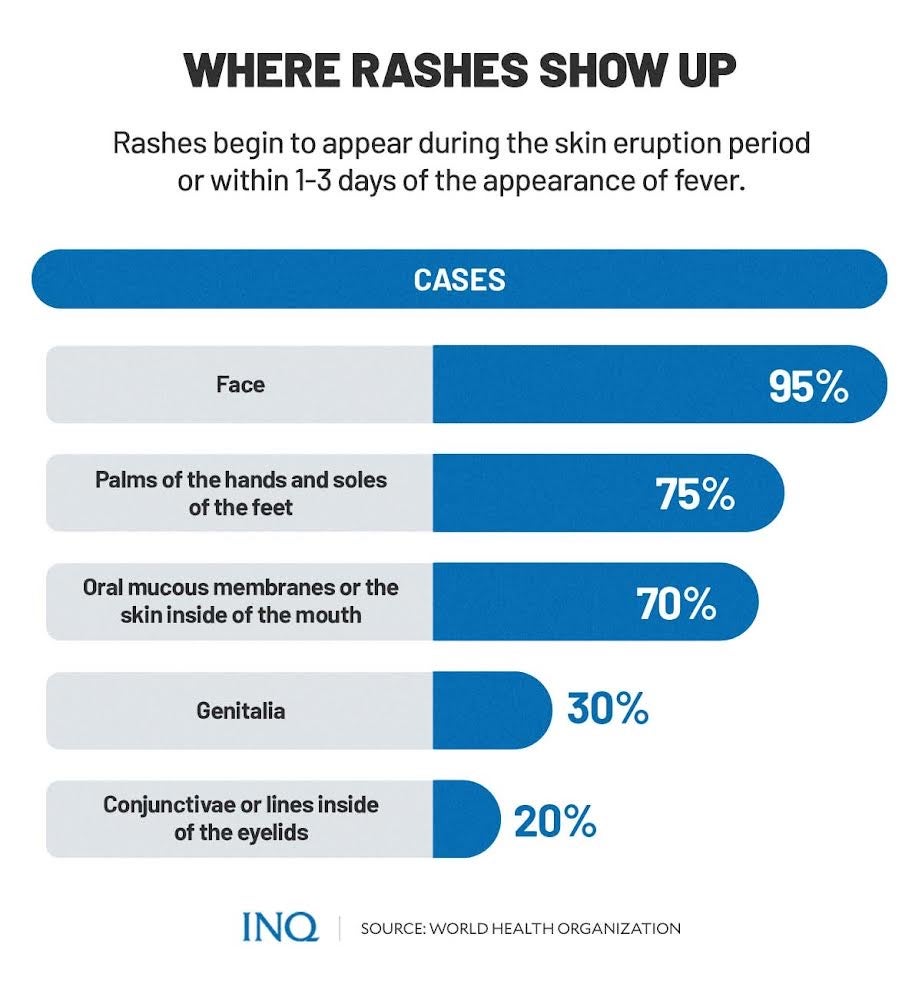 This strategy includes strict border controls as a “primary level of defense” and screening, testing, and quarantine of travelers with monkeypox-like symptoms. International travelers will also be required to register at the BOQ’s onehealthpass.com.ph 48 hours before departure from the country of origin.

Aside from the primary health protocols, another way to control the monkeypox outbreak, according to US CDC, is through smallpox vaccines.

“Because the monkeypox virus is closely related to the virus that causes smallpox, the smallpox vaccine can protect people from getting monkeypox,” said the US CDC.

“Smallpox and monkeypox vaccines are effective at protecting people against monkeypox when given before exposure to monkeypox. Experts also believe that vaccination after a monkeypox exposure may help prevent the disease or make it less severe,” it added. 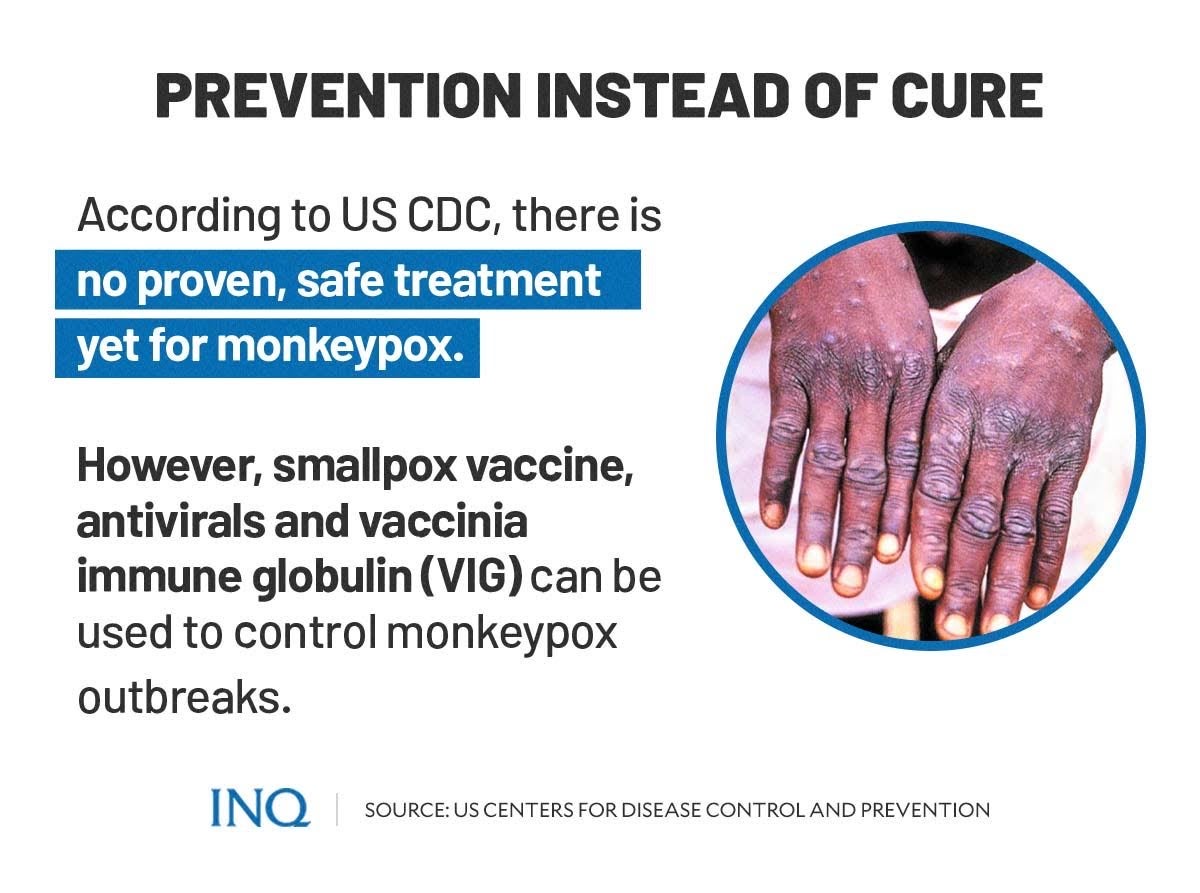 Currently, two vaccines are approved in the US to be administered to protect people against monkeypox: the Jyenneos vaccine, manufactured by the Danish company Bavarian Nordic, and ACAM2000—both of which are currently licensed vaccines in the US to prevent smallpox.

However, the US CDC explained that not all individuals are required to get doses of the said vaccines.

Unlike the mass vaccination strategy imposed to prevent the spread of COVID-19, vaccinations for monkeypox will follow what experts call a “ring strategy,” which focuses on immunizing only the close contact of infected individuals.

“If a case is reported in the country, a public health SWAT team goes out, finds out who the close contacts are of that first case, and vaccinates just those close contacts, and not the entire city or suburb,” Dr. David Freedman, professor emeritus of infectious diseases at the University of Alabama at Birmingham and president-elect of the American Society of Tropical Medicine and Hygiene, said in an article published by Time magazine.

“Because monkeypox is not a virus that is spread mainly through respiratory transmission, you don’t see huge numbers of infected people. So you can do ring vaccination around the known cases.”

The strategy, according to Freedman, will help the US have sufficient vaccines in its Strategic National Stockpile. 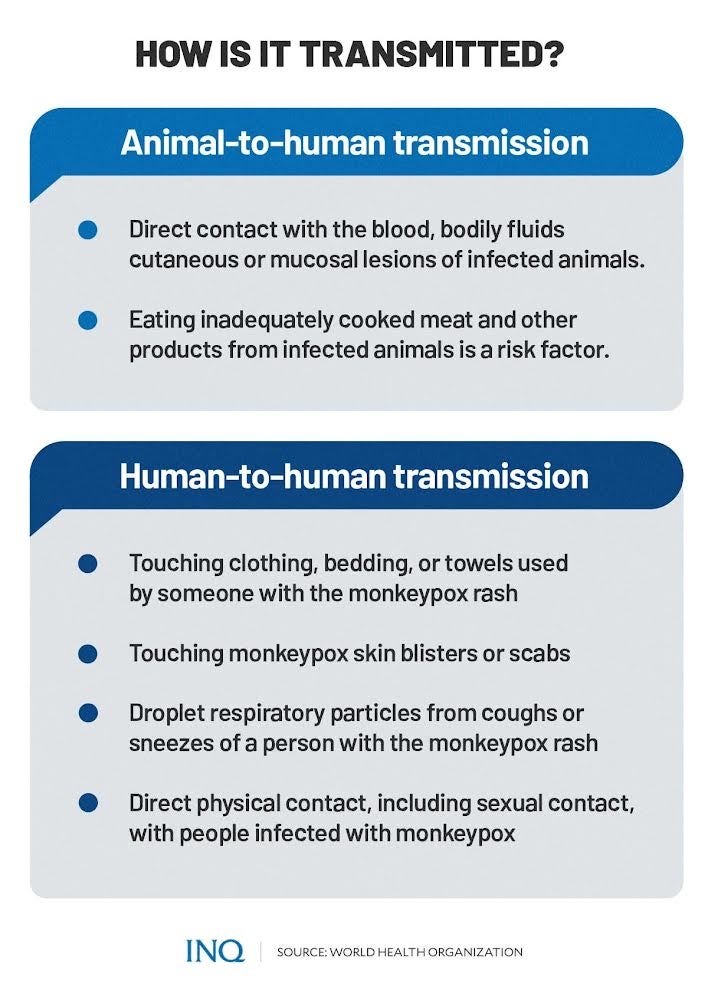 On May 27, the Department of Health (DOH) said that the country has yet to procure vaccines against monkeypox. It revealed, however, that discussions are underway on the possible acquisition of antivirals against the monkeypox virus.

“Monkeypox vaccination is not yet included in the National Immunization Program,” the DOH said in a statement. “Although there is a monkeypox vaccine developed already, this is not yet widely available according to [World Health Organization].”

“There are ongoing internal discussions, based on scientific evidence, for the possible acquisition of antivirals in the event of an outbreak of severe cases,” it said.

According to Tayag, vaccines against monkeypox will be “an important intervention.”

However, he emphasized that as of now, “it is not highly recommended for everyone.”

In the US CDC vaccine guidelines for monkeypox virus, only those “whose jobs may expose them to orthopoxviruses, such as monkeypox” will get vaccinated with ACAM2000 or JYNNEOS.

These people include clinical laboratory personnel who perform tests to diagnose orthopoxviruses, including the monkeypox virus, research laboratory workers who directly handle cultures or animals contaminated or infected with orthopoxviruses that infect humans, and certain health care and public health response team members.

“I know that many want to get vaccinated [against monkeypox], but there’s no supply of the vaccines yet. Even the antiviral [vaccines] are not available,” Tayag said.

The WHO has also recently announced that there is no urgent need for mass vaccinations to control the outbreak of monkeypox.

READ: WHO says no urgent need for mass monkeypox vaccinations

Should we feel scared?

With the country’s anti-COVID-19 response and protocols, experts assured the public, saying that there’s no need to panic or be afraid of monkeypox.

Still, Tayag acknowledged that “having small fear about it is okay, since it will make us more careful.”

Buensalido emphasized that the country already has the tools to protect people against monkeypox. He added that unlike COVID-19, the monkeypox is less contagious.

“The recent years with the COVID-19 pandemic has made us become more attuned with our bodies, as well as our environment,” Yu said.

“So, with this looming threat of another pandemic, I think we just have to continue being vigilant and careful. [We should also] continue being observant to our bodies, as well as our environment, keeping ourselves and our families safe,” he added.