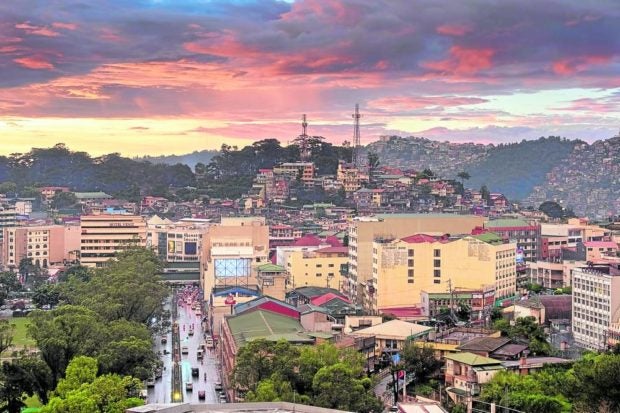 POCKETS OF GREEN | Sections of Baguio’s central business district and its surrounding communities retain pockets of green zones, forests, and watersheds amid a construction boom in the city whose economy is largely fueled by tourism. (Photo by NEIL CLARK ONGCHANGCO)

BAGUIO CITY, Benguet, Philippines — The city council has proposed a five-year moratorium on tree-cutting activities while existing and future forest lands are fenced off from settlers and managed by government foresters to protect the remaining forests and parks here.

Set for second reading are proposed Ordinances No. 0105-20, which would freeze all tree-cutting permits to allow a natural healing process to take place in the city’s surviving timberland, and No. 0021-21, which mandates the local government to preserve and manage all communal forests, tree parks, and watersheds and to establish new urban green zones.

Both measures take into account the 2019 tree audit conducted by the Department of Environment and Natural Resources (DENR), which estimated that the city only has 2.5 million trees.

The city, which is celebrating its second “Saleng (pine tree) Festival” this month, is traditionally associated with the Benguet pine being the country’s City of Pines. But the DENR inventory showed only a fifth (492,974) of its tree population were pine trees.

The measures also cited that the city’s forest and green covers are no longer sufficient for its population (pegged at 366,358 in the 2020 census), based on an urban-carrying capacity report conducted by consultancy group Certeza Infosys for the National Economic and Development Authority in 2019.

The population threshold for forest cover—measured as 40 square meters per person (326,075)—had been breached in 2012, while the carrying capacity of the more expansive green cover (350,458), composed of forest trees and other vegetation, was breached in 2016, the report says.

A moratorium on tree-cutting was initially discussed by the DENR and Mayor Benjamin Magalong when he started the city’s redevelopment after he assumed office in 2019. Private developers initially pushed back because of its potential impact on building projects.

The moratorium was still the first line of defense against forest depletion in 2020, said Councilor Arthur Allad-iw, who sponsored proposed Ordinance No. 0105-20 alongside Councilors Levy Lloyd Orcales and Joel Alangsab. 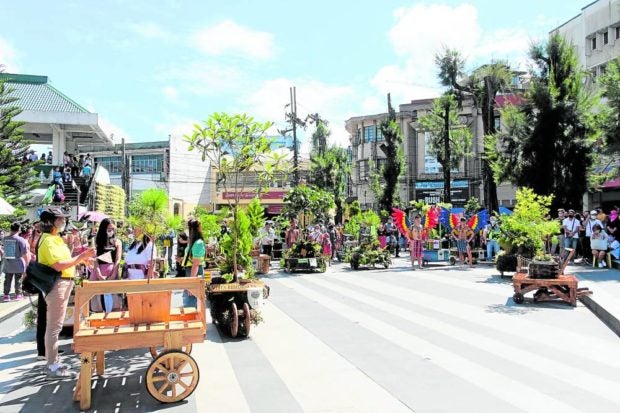 CARTS OF LIFE | Different types of trees in carts are displayed at Baguio City’s Malcolm Square after a parade on June 18 during the summer capital’s celebration of Saleng Festival.(Photo by NEIL CLARK ONGCHANGCO)

The measure would penalize violators with a yearlong jail term and a P5,000 fine, but cutting would not cover dead trees or those that endanger lives.

According to the carrying capacity report, Baguio needs to maintain 60-percent green cover, or “about 3,450 hectares to support the population.”

The council’s research division identified close to 150 existing and potential green zones that are listed for conservation or for urban forest development in the proposed Ordinance 0021-21, which was sponsored by all councilors, most of whom are joining the next council.

Among these are 15 watersheds and woodlands serving residents, such as the 112-ha Busol watershed straddling the city and Benguet’s capital town of La Trinidad, which has settlements.

The measure also lists 27 elementary school campuses, which could accommodate small tree parks, and areas around 57 barangays suitable for pocket forests and parks, or could serve as greenbelts.