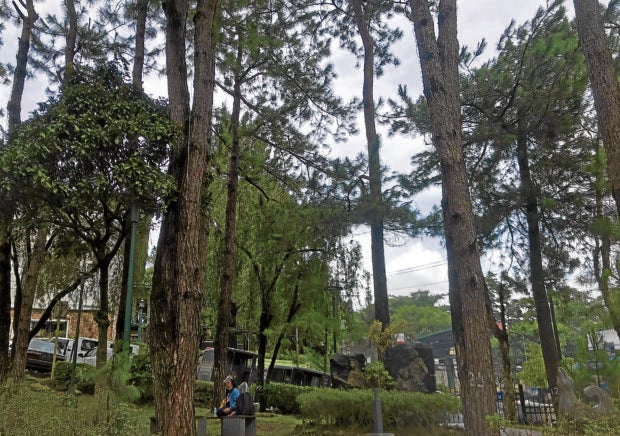 KEEPING IT GREEN Baguio’s diminished pine cover includes trees standing between houses and buildings. Government environmentalists are now protecting the remaining pine trees, and have been studying even pests that destroy the sensitive species. —VINCENT CABREZA

BAGUIO CITY, Benguet, Philippines — What is the summer capital without its pine trees?

Experts from the Department of Environment and Natural Resources (DENR) have started developing a tool to track the pests that have ravaged the city’s forests, particularly two species of bark beetle.

About 2,000 pine trees have died from pest infestations between 2015 and 2019, which caused a setback for the DENR mandate to protect the remaining 50,000 surviving pine trees among Baguio’s 2.5 million trees, said Shirley Jaene Valdez, a member of the DENR’s Watershed and Water Resources Research, Development and Extension Center.

A 2019 study by the Benguet State University concluded that seven species of the bark beetle have been attacking pine trees inside Camp John Hay, which hosts one of Baguio’s forest reserves, she added.

Environment Secretary Roy Cimatu had tasked his agency’s Cordillera office in 2017 to make sure Baguio does not lose anymore pine trees after observing dead pine trees during a game of golf at Camp John Hay, Valdez said at this week’s executive legislative meeting on Monday. Cimatu also ordered a fresh inventory of the city’s forest cover.

According to the 2019 Baguio urban carrying capacity study undertaken by consultancy group Certeza Infosys Corp., the city’s urban forest cover spans 23 percent of its territory. The ideal forest cover should be 30 to 40 percent of the Baguio area.

Aside from pests, rapid urbanization and extreme weather, such as the recent 20-day rains, have been the primary reasons for the city’s diminished forests, Valdez said.

Although the city receives the country’s highest rainfall, unusually strong downpour in recent decades may also “affect the resiliency of forests,” she said.

The DENR has lined up three pine tree projects, including the generation of a Geographic Information System forecasting tool for curbing bark beetle infestations, which was started in July.

Valdez said the bark beetle project would determine the population and attack periods of the pests using traps to be installed in 12 test sites inside Camp John Hay, Panagbenga Park and the Botanical Garden.

Improvised funnel traps lure the beetles using turpentine and other attractive scents to help analysts compute the ratio of beetles inhabiting an infested tree “since it would be improbable to make a head count,” Valdez said.

The project will map the rate and behavior of bark beetle infestation and create “an early warning system” should the spread of pests become a full-blown outbreak, she said.

The first traps put up at the Botanical Garden have also lured other insects, including species that may also be pine tree predators, so these devices may turn out to be short-term solutions to pine tree diseases, she said.