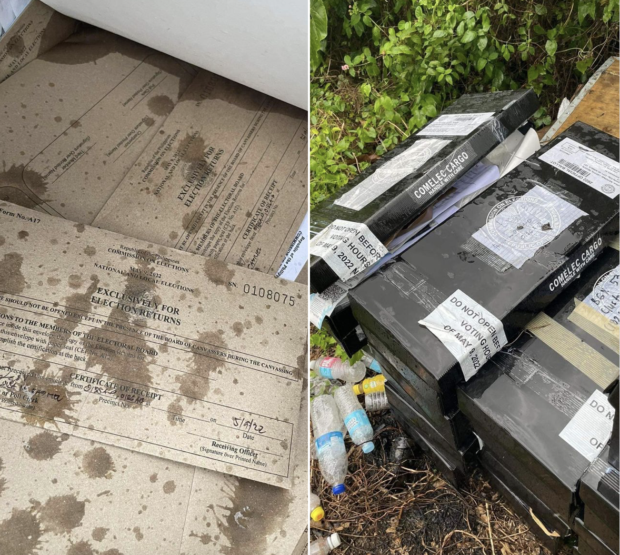 Discarded election paraphernalia used during the May 2022 polls were found by netizens at a vacant lot in Amadeo, Cavite a few days after elections. Image from Rodne Galicha / Facebook

MANILA, Philippines — The Commission on Elections (Comelec) has found that cargo forwarder F2 Logistics is not liable for any election offense, particularly the improper disposal of used election paraphernalia found at a vacant lot in Amadeo, Cavite a day after the May 9 national and local elections.

Comelec acting spokesperson John Rex Laudiangco, quoting Commissioner Aimee Ferolino, who heads the Comelec’s Packing and Shipping Committee (PSC), said that the incident was “on account of inadvertence” and “miscommunication.”

“On election offense, yes, wala pong nakita na (there was no) overt act leading to a probable cause,” Laudiangco told reporters when asked if the issue was settled and that no offense may be attributed on account of F2 Logistics.

“As to contract performance and compliance to its contractual obligations, on going evaluation po ito per government procurement rules,” Laudiango also said of F2 Logistics.

Laudiangco also shared the findings of the separate investigation reports of PSC vice chairperson J. Thaddeus Hernan and of F2 Logistics submitted to Ferolino on June 9.

Ferolino ordered the investigation after video and photos of election documents dumped in a vacant lot made the rounds of social media sites like Facebook.

The investigation revealed that the area where the election materials were found is in fact a parking area of F2 Logistics, and that the said election materials only consisted of used items such as indelible ink, stamp pads, bond papers, used and excess non-accountable forms, ballot secretary folders and envelopes.

“None of the items were considered cause for alarm or used for fraud or similar activities as may have been alleged in the FB post,” the PSC report said.

The report also assured that “the FB post is not a cause of alarm to Commission and all our stakeholders.”

The report was submitted and deliberated upon by the Comelec during its regular en banc meeting last June 15.