A group of taxi operators may soon be filing a petition for a fare hike, even if only for a provisional increase to cope with rising fuel prices.

Jesus “Bong” Suntay, president of the Philippine National Taxi Operators Association, on Thursday said his members wanted a regular fare increase, which means hiking the rate for every kilometer traveled.

“For me, I told them that the most viable thing to do is to file for a provisional fare increase,” Suntay, who also represents the fourth district of Quezon City in the House of Representatives, told the Inquirer.

His group is looking at filing its fare hike petition at the Land Transportation Franchising and Regulatory Board (LTFRB) next week.

“What we are asking is already a fair request. It’s the most humanitarian win-win solution,” Suntay said.

Once granted, the petition would also prevent taxi drivers from doing illegal acts that include imposing a fixed rate to a destination instead of charging by the meter and demanding that passengers add more to their fare, he said. 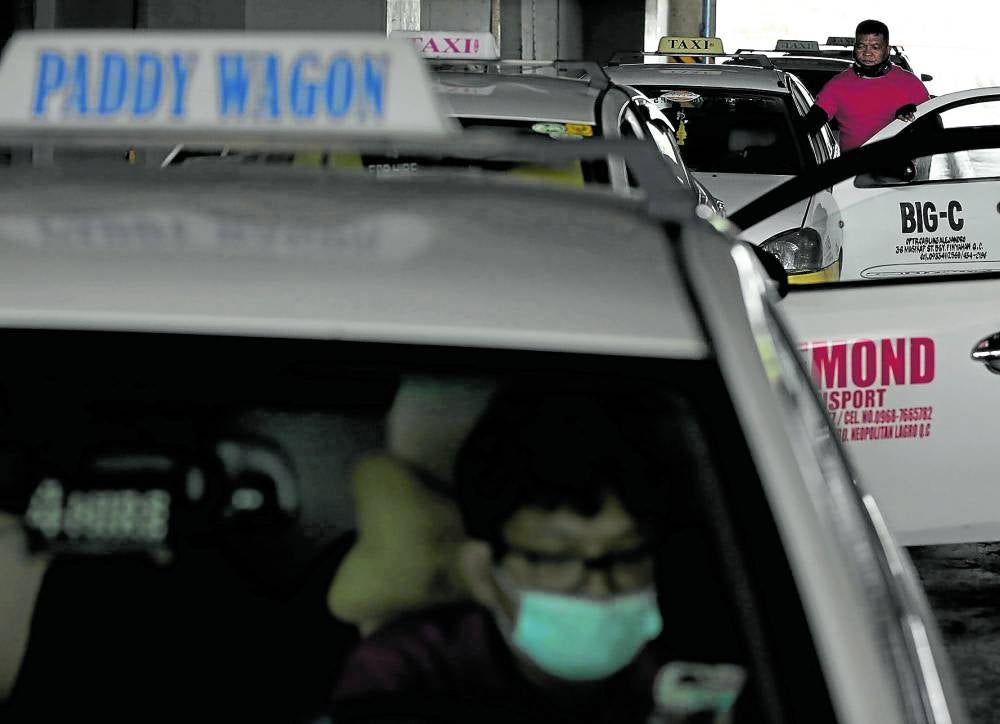 HOPING FOR A ‘WIN-WIN’ The Philippine National Taxi Operators Association is looking at filing its fare hike petition at the Land Transportation Franchising and Regulatory Board next week. —Inquirer photo

“As the saying goes: ‘A desperate man will cling to a knife.’ We don’t want to put the drivers in that kind of situation, which is why we are making this request,” Suntay said.Taxi driver Gregorio Laude, a father of two, said the increase in flagdown rates would be a big help for his family.

Before the weekly skyrocketing prices of petroleum products, Laude paid around P1,300 to P1,500 for gasoline daily. He now pays P3,000.

Apart from that, the “boundary” was raised from P900 to P1,300 by the taxi owner, who reasoned that there were more passengers now after pandemic restrictions were relaxed in Metro Manila.

“It’s not just the gas, but the boundary as well, which consumes what we would normally collect for the day,” Laude said.

He also used to get an additional P20 to P30 in tips from at least four out of every 10 passengers. If he is lucky, a generous passenger would give him P50 to P100.

“Of course, they understand our situation and they themselves would voluntarily give a tip, sometimes bigger,” Laude said.

He and the other drivers are asking the taxi fleet owner to reduce the boundary by P200.There was no commitment from her, only that she will “study” the request, Laude said.

The P200 would go a long way. “Imagine how many kilos of rice can that buy,” he said.

The last time the LTFRB approved a taxi fare increase was in October 2017 at the request of drivers and operators in order to allow them to compete with surging app-based rides.

The LTFRB also cited inflation, the rising cost of fuel and the worsening traffic among its reasons for approving the hike.

The taxi fare structure was modified with a flagdown rate that was raised to P40 for the first 500 meters in the Metro Manila. It remained at P35 in the Cordillera Administrative Region.

The LTFRB allowed a rate of P13.50 per kilometer, slightly higher than the previous P10.50 for the succeeding 900 meters. The LTFRB also discarded the P3.50 rate for every two minutes of waiting time and instead allowed charging P2 for every minute of travel time.

As two transport groups welcomed the proposal, they asked the government to first ensure that the initial and second tranches reach all the beneficiaries.

Until now, around 30 percent to 40 percent of the members of the Federation of Jeepney Operators and Drivers Association of the Philippines have yet to receive the first two tranches, according to its president Ricardo Rebaño.

This was partly due to bureaucratic requirements demanded by the LTFRB from drivers. Most of these are documents that require the presence or signature of the previous owner of a jeepney unit.

“We welcome any move to push for a third tranche of subsidy. But we just ask the government to go easy on the requirements,” he told the Inquirer.

Mar Valbuena, chair of transport coalition Manibela, complained about the “slow” release of the subsidies.

Most members of the coalition have yet to receive the first tranche, he said.

“We don’t know where the first two tranches are, then there’s a third tranche already?” Valbuena said. “This assistance is a big help, but it would be more beneficial if this subsidy reaches all of our fellow drivers.” —WITH A REPORT FROM INQUIRER RESEARCH