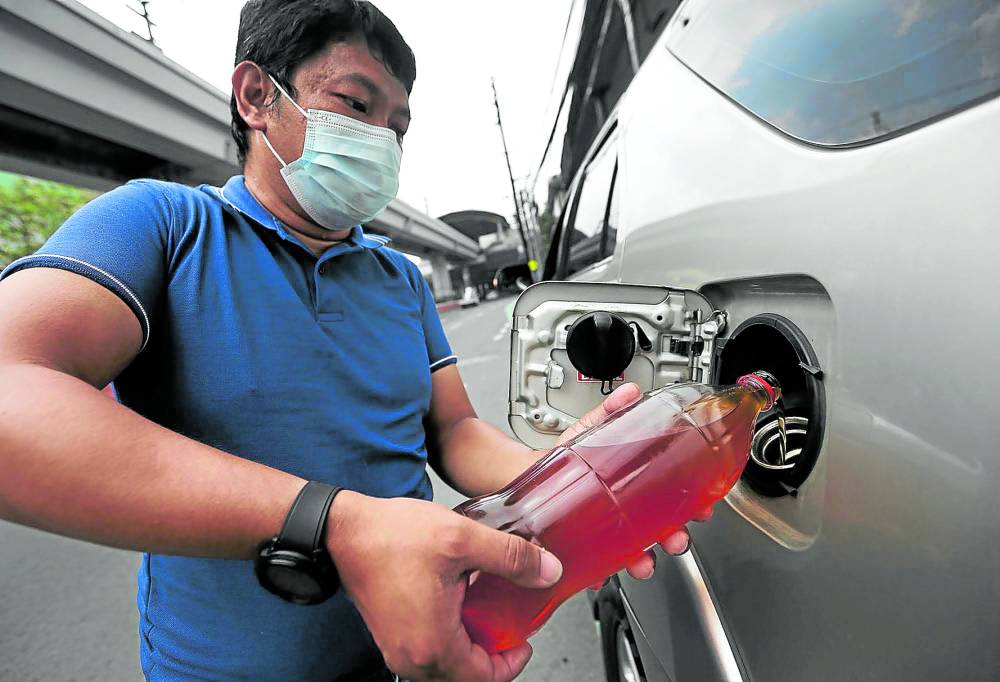 COOKING OIL FUEL Ed Brisenio, an engineer, loads a bottle of cooking oil into his car as additional fuel while the country buckles under the weight of high prices of petroleum products. He says that his car has traveled farther over the past two years with this organic fuel. —RICHARD A. REYES

MANILA, Philippines — The Land Transportation Franchising and Regulatory Board (LTFRB) on Friday denied a petition for a P1 provisional fare hike for public utility jeepneys (PUJs) by several transport groups to help them cope with the sharp increases in oil prices.

LTFRB Executive Director Maria Kristina Cassion said the board “judiciously” balanced the rights of the riding public “vis-à-vis the right of the operators to financial returns” in rejecting the petition.

The petition for the provisional fare increase of P1 for the first 4 kilometers was filed on Jan. 31 by 1-Utak, Pasang Masda, the Alliance of Transport Operators and Drivers Association of the Philippines (Altodap), and the Alliance of Concerned Transport Organizations (Acto).

“While the board recognizes present clamor of stakeholders in public land transportation services for necessary action relative fare rates, we cannot be insensitive to the plight of Filipinos … every time an increase on the prices of commodities occurs,” the LTFRB’s resolution said.

The decision was separate from the “main case” filed by the transport groups to seek a minimum fare of at least P14-P15, according to Cassion.

She explained that the decision was also based on the position of the National Economic Development Authority (Neda) that the fare hike “would fuel further inflammatory expectations when these costs are transferred to the consumers as high costs of transportation expenses will reduce the purchasing power of the general public who are dependent on public transportation.”

Neda also stated that any petition for a provisional or permanent fare adjustment was a “matter of paramount public importance” that would create an “accelerated increase” in the prices of basic commodities and services, Cassion said.

She said that the Duterte administration had “proactively set in place…baskets of solutions” to ensure “continued viability” of the country’s public transport system.

These include the fuel subsidy program and the Service Contracting Program which is expected to start next month once a P7-billion budget for it is released by the Department of Budget and Management, she added.

Cassion said both programs were expected to counter the additional operational costs for public utility vehicles and avoid the “unequitable (sic) transfer” of such costs to commuters to “safeguard the operating capacity of the transportation industry for an extended period of time to insulate any speculative, negative impact on our economy.”

The LTFRB has not yet ruled on a separate petition filed by drivers for transport network vehicle services (TNVS) represented by the TNVS Community.

The group represents around 25,000 drivers and vehicle operators of the ride-hailing company Grab.

Its spokesperson, Saturnino Mopas, said that the petition had not been acted upon by the LTFRB since it was filed in November last year.

“What we were only asking was a P15 increase just for the base fare only,” Mopas told the Inquirer in a phone interview on Friday. “That is the number one appeal of the TNVS Community—to have the base fare increased.”

The LTFRB informed reporters about a petition for a fare increase, not from the group, but from MyTaxi.PH Inc., or Grab.

Cassion said that the petition by the company was first heard on March 1. She said the petitioners were required to submit and present additional arguments to support their petition on April 5. Grab asked for an extension, she said.

She said that in resolving the petition, the LTFRB would consider several factors, including economic viability of the operator; effect on the commuters; socioeconomic point of view of the vulnerable market or riders, workers, and drivers; impact on inflation; number of units running; and ridership.

In the proposal presented by the company, the flagdown, or base fare, was to be raised by P5 for sedan and hatchback and subcompact cars. For premium AUV and SUV it proposed a P10 increase.

At present, the base fare for sedans is P40, P30 for hatchbacks and subcompact vehicles, and P50 for premium vehicles.

According to Mopas, the petition filed by MyTaxi.PH was separate from theirs.

“We are praying that the LTFRB will act on our petition,” he said.

Mopas said a TNVS driver would roughly make a gross earning of P3,000 a day, 20 percent of which will go to Grab.

He said a driver will have P2,400 after working eight hours but he will have to pay P800 to the vehicle operator under the boundary system.

Of the remaining P1,600, another P800 will be spent to refuel the vehicle, leaving the driver with only P800, Mopas said. From that amount would be deducted the driver’s meals, reloading mobile phone data, and the added fuel costs resulting from the petroleum price increases.

“With all those considered, only P200 will be left for a boundary driver. Is P200 enough to live on for a day?” Mopas asked.

Some drivers, he said, would extend their working hours from eight to around 12 hours to 14 hours, or even as long as 18 hours, which would be detrimental to their health.

Amid rising pump prices, DOTr says no to fare hike
LTFRB warns jeepney drivers who can’t wait for fare hike
LTFRB: Minimum fare stays at P9 for now; bid to increase it to P10 up for decision