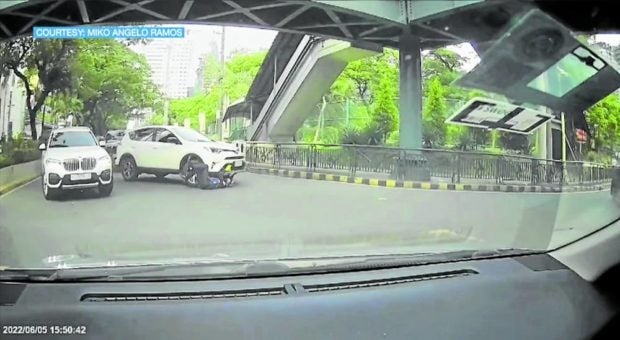 MANILA, Philippines — Without a court-issued order or arrest warrant, the owner of the Sports Utility Vehicle (SUV) who ran over a security guard in Mandaluyong last week may still be able to leave the country, according to the Bureau of Immigration (BI).

BI spokesperson Dana Sandoval said in an interview on Teleradyo that the suspect, Jose Antonio Sanvicente, who remained at large, was only placed on the Immigration’s lookout bulletin, which essentially means government agents may only monitor but not prevent any travel abroad.

With a lookout order, the BI is tasked to inform the Department of Justice (DOJ) if it comes into contact with the SUV owner in any of the country’s airports or sea ports.

(We need to inform the DOJ and the NPS to check if at the last minute, a hold departure order or a warrant of arrest or whatever order a court can issue has been handed down against the subject.)

“From there, kung wala pong na-issue sa kanya, then he will be allowed to depart but kukunin po lahat ng details ng kanyang travel,” she added.

(From there, if there is none, then he will be allowed to depart but we will record all the details of his travel.)

As per the bureau’s records, the owner has no recent travel and has not fled the country, said Sandoval

Earlier, the DOJ issued an immigration lookout order against Sanvicente, who was identified as the owner of the SUV.

Last June 5, the vehicle ran over a security guard manning the traffic near a mall in Mandaluyong. The incident was caught on a dashcam and has gone viral.

However, police said there is no proof that the SUV owner was driving the car when the incident happened.

The security guard sustained several injuries and had to be monitored at an intensive care unit.  He was released from the hospital last Friday.