NCIP calls out pageant organizers over supposed misuse of ‘bahag’ 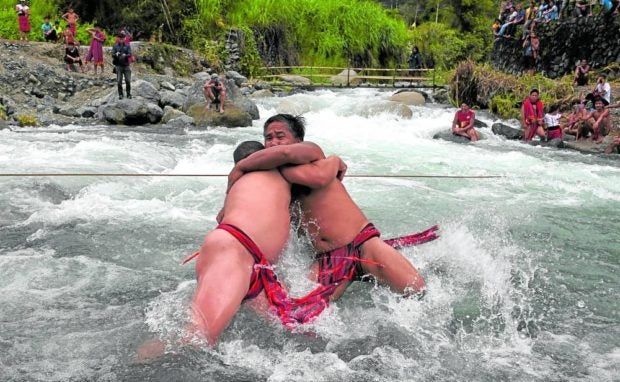 TRADITIONAL GAME | One of the more recent events that allowed Cordillera men and boys to wear their “bahag” in water is a rice harvest thanksgiving festival, shown in this 2018 photo, in Hungduan, Ifugao, where community members compete in native games like wrestling and tug-of-war. (Photo by EV ESPIRITU / Inquirer Northern Luzon)

BAGUIO CITY, Benguet, Philippines — Organizers of an international male pageant have been asked to explain the alleged misuse of the traditional Igorot “bahag” (G-string or loincloth), following a barrage of complaints online after contestants from 40 countries wore the indigenous garment in the contest’s swimsuit competition last week.

Social media threads were filled with comments about the propriety of tucking the flaps of the bahag in the contestants’ waists when they paraded on stage on June 11 during the swimwear event of this year’s “Man of the World” competition.

The contestants will again wear the bahag for the competition’s culminating show at the Baguio Convention and Cultural Center on June 18.

In a statement on Monday, Atanacio Addog, director of the National Commission on Indigenous Peoples (NCIP) in the Cordillera, acknowledged the promotion of Cordillera culture on the world stage through the fourth edition of “Man of the World.”

But Addog stressed that the bahag “should be accorded the highest respect by wearing them properly and for the purpose they were made,” like any other traditional garment.

He said the Cordillera community was the final authority that would decide if artifacts, dances, crafts like weaving, and indigenous garments may be altered or modified to suit modern lifestyles.

According to Addog, the NCIP will support any “punitive actions” that Cordillera communities may take against the improper use of their traditional garments.

“Cordillera garments are far more intricate and complex because the way they are worn defines how an individual is treated in the community,” said Michael Umaming, officer in charge of the NCIP Cordillera.

“In Sagada (Mountain Province), the manner of wearing the ‘tapis’ (indigenous wraparound skirt) would signal whether a woman is married or a widow,” Umaming said.

The use of bahag is generating the kind of buzz that the pageant organizers did not anticipate, said pageant chair Jennylyn Floresca in a telephone interview.

“We wanted the Cordillera culture to be a serious subject of discussion when we promoted the bahag at the pageant,” she said.

Scholars like Maria Aplaten, who authored the 2019 book,”Nan Nataguan Tako (Cordillera history, attires, music, dances and festivals),” were consulted to make sure the bahag was worn properly, said Floresca, a filmmaker and a Kankana-ey.

The pageant had been on a two-year hiatus because of the COVID-19 pandemic, and it “intends to contribute to the country’s tourism recovery initiative now that the economy has reopened,” Floresca said.

She said the pageant was also a convenient platform for introducing Cordillera culture to the participating delegations from various countries, “which was why the pageant chose to promote the bahag.”

Floresca said a misinterpretation of the program might have triggered some of the online backlash. The candidates were judged for how well they wore the bahag, which was a separate category from the actual swimwear competition, she said.

Ryan Mangusan, former chair of the indigenous peoples affairs committee in the Cordillera Regional Development Council, said complaints about the “bastardization of the Igorot culture” would not die down unless younger Cordillerans protect their parents’ traditions.

“The world has changed so fast and the handwoven designs and materials used in our traditional attire are now used as embellishments to improve the quality and raise the value of modern-day apparel,” Mangusan said.

Displaying the bahag and other cultural items outside the confines of their ritual purposes in order to promote tourism may have also sent the wrong signals about the culture, scholars have pointed out.

A three-volume set of a 2019 coffee table book produced by the NCIP, for instance, shows what appear to be staged photographs of farmers planting while wearing their bahag and baskets meant for fishing.

Some of the photographs show youths leaping into a waterfall while wearing their bahag.

In Baguio, it is ‘futhag’ (football ‘bahag’)