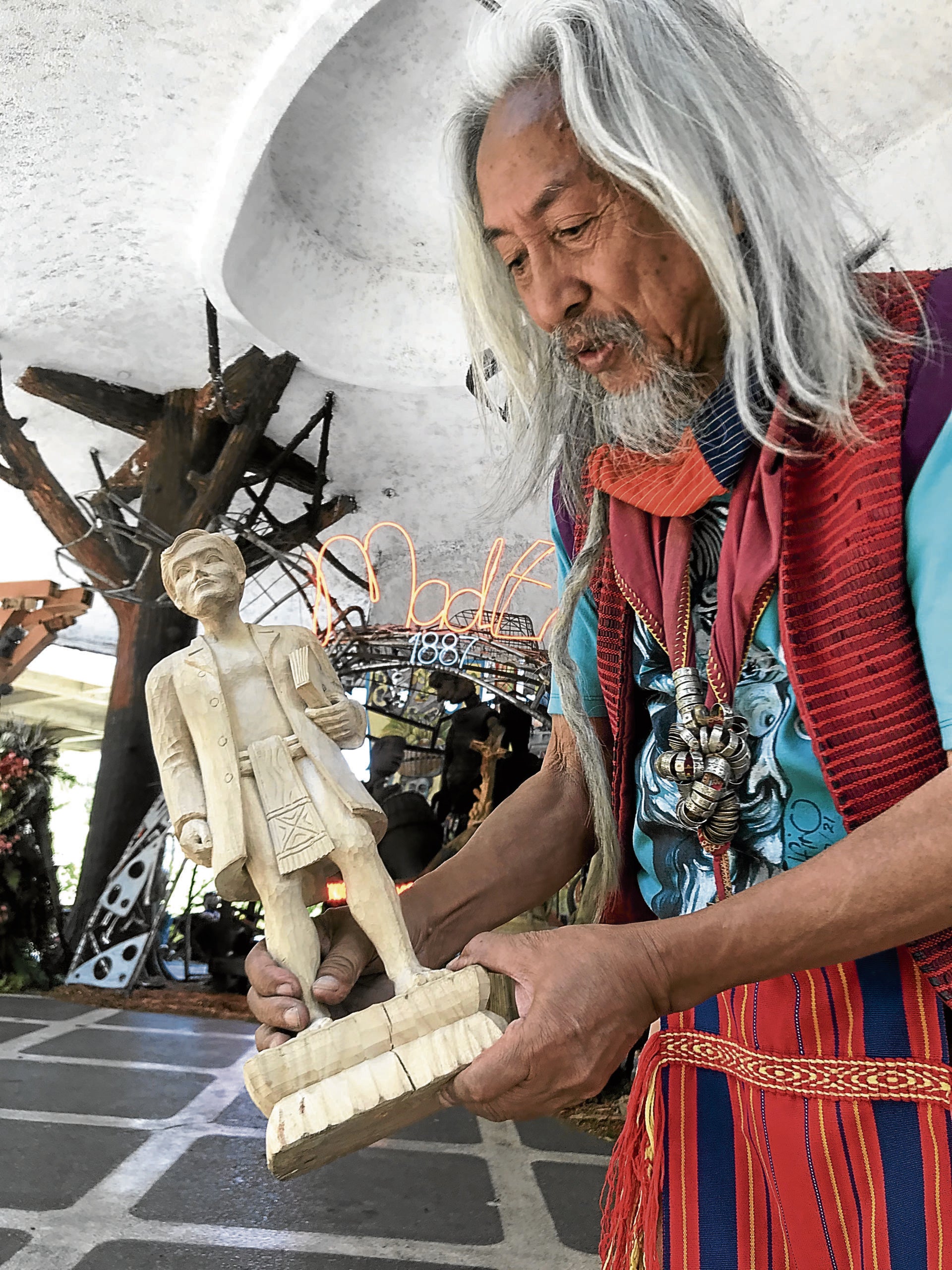 BAGUIO CITY — A miniature wooden statue of Jose Rizal in coat and “bahag” (loincloth) was the star of an impromptu art installation that Kidlat Tahimik, a national artist for film, put up on June 12.

It was Tahimik’s way of echoing for today’s generation the national hero’s strong disapproval of the way Filipinos were portrayed—or racially caricatured—at an international event held during his time.

Rizal then denounced the 1887 Philippine Exposition in Madrid for exhibiting Filipinos as though in “a human zoo,” the 78-year-old Tahimik said. The acclaimed visual artist thus decided that a reemagined Rizal in indigenous attire, particularly that of the Cordillera people, was an appropriate subject to mark Independence Day.

Tahimik (or Eric de Guia) wanted to keep the piece on display at Sunshine Park in Baguio until today, the 160th anniversary of Rizal’s birth, but it had to be dismounted and shipped to Spain on June 16 for another exhibit.

Wooden carving is part of the larger installation where it occupies a stage shaped like a “salakot” (native hat). It was last viewed by the public at a spot near Baguio Convention Center where city officials held the recent Independence Day program.

Titled “MadExpo 1887,” the Rizal wood carving portrays the national hero wearing a European-style coat and a bahag, with a book in hand.

“What have we heard about Rizal? Wow, he wrote his novels in Spanish because he was fluent in the colonizer’s language. Wow, he introduced a water system using Western engineering. Wow, he operated on the eyes of his mother because he learned Western medicine,” Tahimik said, recounting the thoughts that molded his creation. “What message does that say? That we have to be Westernized to bring progress. But I believe strongly that beneath Rizal’s European garb is this G-string, which is his core Filipino nature that drove him to excel, not Western culture,” he added.

The expo prompted Rizal to write a letter telling his friend, the German scholar Ferdinand Blumentritt: “Don’t mind the Philippine Exposition in Madrid. According to the newspapers and the information I have, it will not be a Philippine Exposition but an Exhibition of Igorots, who will play their musical instruments, cook, sing and dance.”

“But I pity this poor people,” Rizal further wrote. “They will be exhibited in the Zoological Garden of Madrid and with their simple original apparel they will catch a dreadful pneumonia. This sickness is very frequent in Madrid and even the Madrid people catch it in spite of their covering.”

Archival records describe the 1887 Madrid Expo as an event meant to foster commercial ties between Spain and its far-flung Asian colony.

But, as Tahimik saw it, the exposition also displayed the Philippines’ indigenous people and their artifacts to suggest that they were inferior to Western-educated Filipinos. INQ