Indigenous peoples’ body says no consent was given by the acclaimed tattoo artist; authenticity of thumbmark in contract questioned
By: Vincent Cabreza - Reporter / @Inquirer_Baguio
Philippine Daily Inquirer / 04:45 AM August 31, 2021 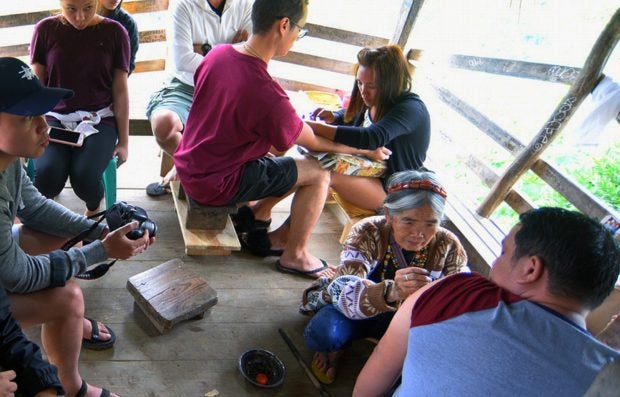 TRAIL OF INK: In this photo taken in November 2017, local and foreign visitors flock to the village of Buscalan in the Kalinga town of Tinglayan to get tattoos rendered by “mambabatok” (traditional tattoo artist) Whang-ud, generating a local tourism industry. But elders of the Butbut tribe there have been concerned about the attention and its impact on indigenous culture. (EV ESPIRITU / Inquirer Northern Luzon)

BAGUIO CITY — The National Commission on Indigenous Peoples (NCIP) in the Cordillera region asserted that Apo Whang-od did not give her consent to teach the Kalinga art of tattooing for the online academy of vlogger and content creator Nuseir Yassin, popularly known as Nas Daily.

In a statement on Sunday, lawyer Marlon Bosantog, director of the NCIP in Cordillera, said he interviewed Whang-od on Aug. 17 and reviewed the contract, where the acclaimed “mambabatok” (traditional tattoo expert) reportedly affixed her thumbmark, and found the document “grossly onerous” for stating that Nas Academy had exclusive ownership of any content that the show would produce.

Nas Academy had advertised tattoo lessons to be taught by Whang-od, the 2018 Dangal ng Haraya awardee, but it discontinued the promotions after being called out on social media for “cultural appropriation.”

But Bosantog said the details and impact of the Nas Academy show were not properly disclosed to Whang-od or the Butbut community where she belongs.

According to Bosantog, Whang-od denied affixing her thumbmark to any contract for such online academy and that the provisions of the contract were not explained or discussed with her or her representative.

He said the government would conduct a forensic examination of the supposed thumbmark of Whang-od on a contract that gave Nas Academy full control over her image and voice, and the video recordings of her tutorials.

“When the validation team compared the thumbmark affixed by Apo (Whang-od) to the contract to that of one she affixed to a clean piece of paper, there is apparent disparity,” Bosantog said.

He said the investigating team also observed that the contract applied laws of Singapore and not those from the Philippines.

In response, the Philippine branch of Nas Academy denied the allegations of the NCIP, saying that a local production company hired by Yassin conducted “due diligence” in obtaining Whang-od’s or her representative’s consent and signature.

According to Nas Academy, the contract was presented and translated to Whang-ud by her niece Estela Palangdao in the presence of Whang-od’s brother and nephew, two other members of the Butbut tribe and a tourism officer of Tinglayan town in Kalinga province.

The academy also refuted claims that the contract was onerous since Whang-od was supposed to receive a share of the income generated from the project.

“As proof, her niece Estela opened a bank account where the proceeds from this project would be sent,” Nas Academy said in a statement on Monday.

Before the project was canceled, Whang-od’s online tattoo lesson was advertised for a fee of P750 for each registrant.

It said the academy was only helping Whang-ud and her family get financial support amid the pandemic that affected the tourism industry.

But the NCIP said Nas Academy, and other organizations that intend to use indigenous Cordillera knowledge and practices for research or commercial purposes, should have secured the permission of the Butbut tribe in the Buscalan community.

The NCIP stressed that the art of tattooing is “a cultural expression,” and transplanting the skills and art form to an online platform that is accessed by millions of people, will cause it to “lose its authenticity and cultural meaning.”

Turning the skill into a “generic” art form would “discourage the next generation from learning and carrying on with the Butbut traditions,” the NCIP said, citing the sentiments aired by Buscalan elders last week.

Bosantog added that an online tutorial would also disrupt the vibrant tourism that has grown in the Butbut community because of Whang-od’s skill, now passed down to younger mambabatok in the tribe.