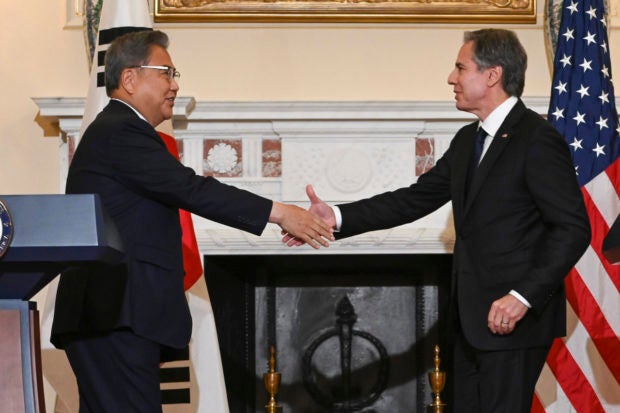 SEOUL — The United States and South Korea are prepared to make adjustments to their military posture to counter North Korea, the foreign affairs chiefs of the two allies said.

In their first face-to-face bilateral talks on Monday in the US, South Korean Foreign Minister Park Jin and US Secretary of State Antony Blinken reaffirmed their joint commitment for extended nuclear deterrence, while urging North Korea to come to dialogue.

“I can say simply for today that we’re preparing for all contingencies, again in very close coordination with others, notably with the ROK and with Japan. And we are prepared to make both short- and longer-term adjustments to our military posture, as appropriate,” Blinken said in a press conference following the bilateral talk, referring to South Korea by its official name, Republic of Korea.

By the adjustments, Blinken elaborated that they are committed to discussing the expansion of the scope and scale of their combined military exercises for defensive and preparedness purposes, training on and around the Korean Peninsula.

“Until the regime in Pyongyang changes course, we will continue to keep the pressure on,” Blinken added.

The South Korean foreign minister expressed concerns over Pyongyang’s increasingly aggressive rhetoric in regard to its use of tactical nuclear weapons, and said the allies stand together in a “united” and “firm” response against North Korean provocations, putting it as one of the top policy priorities.

Intelligence authorities of Seoul and Washington assess Pyongyang has completed preparations for what would be its seventh nuclear test.

“We affirmed that any North Korean provocations, including a nuclear test, will be met with a united and firm response from our alliance and the international community,” Park said.

“Pyongyang’s continuous provocations will only lead to strengthened deterrence of the alliance and stronger international sanctions measures.”

Park said he discussed concrete ways with Blinken to close loopholes in the implementation of existing sanctions as well as ways to further strengthen the sanctions regime.

Acknowledging the importance of extended deterrence, the two foreign affairs chiefs also agreed on the early reactivation of the Extended Deterrence Strategy and Consultation Group, where they would be able to discuss “concrete” measures involving the US nuclear umbrella that protects South Korea. According to Park, such measures include the “timely deployment of strategic assets when necessary.”

While warning the North Korean regime against military provocations, Blinken and Park also urged it to change its course for dialogue and diplomacy, saying they seek dialogue “without preconditions.”

“We have been very clear that we remain committed to dialogue and diplomacy. We are prepared to take a more flexible and open-minded approach to diplomacy vis-a-vis North Korea,” Park said. 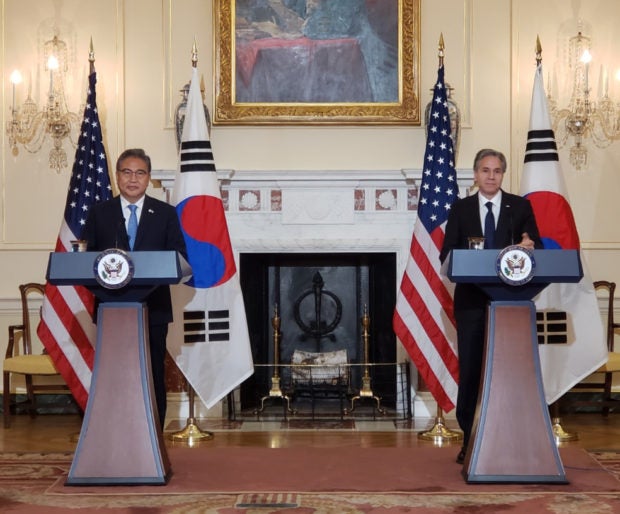 The South Korean foreign minister also raised anticipation to “normalize as soon as possible” the operation of the intelligence-sharing General Security of Military Information Agreement with Japan as means for stronger security cooperation in the region.

“With regard to GSOMIA, we want GSOMIA to be normalized as soon as possible together with the improvement of the Korea-Japan relationship,” Park said.

“In order to deal with the threat from North Korea, we need to have a policy coordination and a sharing of information between Korea and Japan and with the United States.”

The two neighboring countries first forged the intelligence-sharing agreement in 2016, under which they would exchange military information. But after Tokyo introduced trade-curbing measures in retaliation against the Korean Supreme Court’s ruling in favor of those forced into labor for Japanese firms during the Japanese colonization period, Seoul also considered the termination of the GSOMIA.

While South Korea ultimately withdrew from the option to renew the pact, information exchanges have been meager since.

“The bilateral economic relationship between the Republic of Korea and the United States is one of the strongest in the world,” Blinken said.

“We’re your second-largest trading partner; you’re our sixth-largest. We’re the second-largest investor in your economy; you invest more in the United States than you do in any other country. In so many ways, we are profoundly linked together through our economics.”

In a separate meeting with US Secretary of Energy Jennifer Granholm, the two countries shared the understanding that they are the “best partners” in the nuclear energy sector.

According to South Korea’s Ministry of Foreign Affairs, the two chiefs exchanged their views of the agreement made between the presidents of the two countries in their latest summit in May.

They also agreed on the importance of abiding by the highest standard protocols on nuclear nonproliferation for nuclear power plants in the private sector.

Park arrived in Washington on Sunday on a four-day trip. Park’s trip is his first since he became foreign minister, and it comes on the heels of the first summit between US President Joe Biden and South Korean President Yoon Suk-yeol last month.

US to keep up North Korea pressure; Seoul urges China to use influence