US to keep up North Korea pressure; Seoul urges China to use influence | Inquirer News

US to keep up North Korea pressure; Seoul urges China to use influence 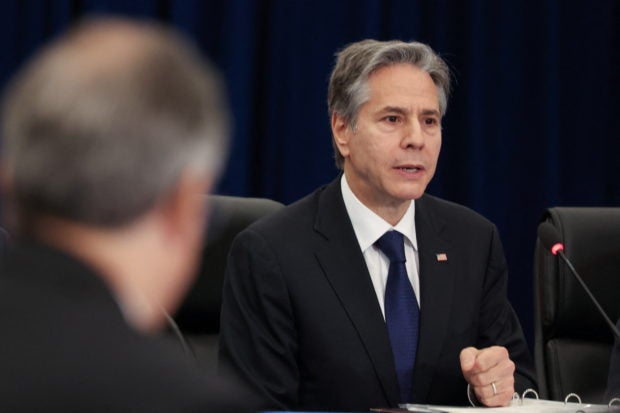 FILE PHOTO: U.S. Secretary of State Antony Blinken speaks at a trilateral meeting with Canadian and Mexican counterparts at the ninth Summit of the Americas in Los Angeles, California, U.S., June 10, 2022. REUTERS/Lucy Nicholson

WASHINGTON — The United States will maintain pressure on North Korea until Pyongyang changes course, U.S. Secretary of State Antony Blinken said on Monday, while his South Korean counterpart urged China to persuade the North not to resume nuclear testing.

Blinken told reporters following a meeting with South Korean Foreign Minister Park Jin the United States remained open to dialogue with North Korea but Pyongyang had ignored the calls and instead tested missiles and made preparations to resume nuclear testing for the first time since 2017.

“Until the regime in Pyongyang changes course, we will continue to keep the pressure on,” Blinken told reporters, referring to U.S.-led international sanctions on North Korea.

Park said any provocations by North Korea, including a nuclear test, would be met with a united and firm response and urged China to use its influence.

Park said North Korea was at a crossroads – it could go ahead with a nuclear test and isolate itself, or return to diplomacy and dialogue.

“I also think China should play a very positive role to persuade North Korea that maintaining peace and stability on the Korean peninsula requires their new thinking,” he said.

Park said he and Blinken had agreed on early reactivation of an extended deterrence working group, a policy body dealing with the U.S. nuclear umbrella that protects South Korea.

He said the body deals with deployment of strategic assets when necessary, but did not elaborate. Blinken said Washington was prepared to make short and longer-term adjustments to its military posture, as appropriate.

Blinken said he expected the working group would be back up and running in weeks ahead and said Washington and Seoul were committed to discussing how to expand the scope and scale of their combined military exercises.

Blinken said the United States had noted the appointment of North Korea’s first female foreign minister last week, key nuclear negotiator Choe Son Hui, but added that the U.S. approach to a country was based its policies, not individuals.

China’s U.N. envoy told Reuters last week Beijing does not want to see another North Korean nuclear test, which is partly why it vetoed a U.S.-led bid to impose new U.N. sanctions on Pyongyang over renewed ballistic missiles launches.

But Ambassador Zhang Jun warned against making presumptions on how Beijing might react to a seventh test, which Washington has warned could happen at “any time.”

In recent years China and Russia have been pushing for an easing of sanctions on North Korea on humanitarian grounds – and in the hope that it can be convinced to return to negotiations.