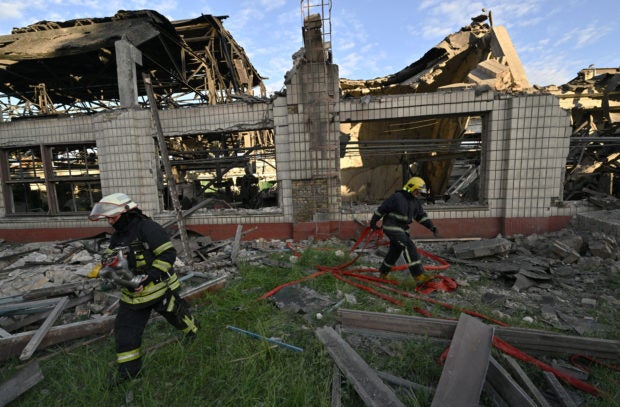 Firefighters intervene in a destroyed production depot of the Darnytsia freight cars repair plant, which was targeted early morning by Russian missile strikes in Kyiv, on June 5, 2022. AFP

KYIV—Ukraine has lost a quarter of its arable land since Russia’s invasion, notably in the south and east, the deputy agriculture minister said Monday while insisting that food security is not threatened.

“Despite the loss of 25 percent of arable land, crop planting this year is more than sufficient” to ensure food for the population, Taras Vysotskiy told a news conference.

He said national consumption levels had fallen “due to mass displacement and external migration” as millions fled to escape the fighting.

More than seven million people are estimated to have been displaced within Ukraine by Russia’s war, figures from the International Organization for Migration (IOM) and the UN refugee agency (UNHCR) show.

But another 7.3 million have fled abroad, more than half of them to Poland.

Despite the significant loss of land to the Russians, “the current situation of crop planting areas.. does not pose a threat to Ukraine’s food security,” he said.

“Ukrainian farmers managed to prepare relatively well for sowing before the war started,” he said.

“In February, Ukraine had already imported about 70 percent of necessary fertilisers, 60 percent of disease control products and about a third of the required fuel” for sowing, he said.

However, the invasion of several regions by Russian troops and the ongoing blockade of Ukraine’s Black Sea ports, preventing the export of grain, forced Ukrainian farmers “to change what they were sowing and how much,” Vysotskiy said.

Before the war, Ukraine had more than 30 million hectares of arable land, according to the international NGO World Data Center-Ukraine.

Despite Vysotskiy’s reassurances that the war is not threatening Ukraine’s domestic food supplies, the UN has warned the conflict risks tipping tens of millions around the globe into food insecurity, with the risks of malnutrition, mass hunger and famine.

Before the war, Ukraine was the world’s fourth-largest supplier of wheat and maize.

Between them, Russia and Ukraine produce 30 percent of the global wheat supply.

Ex-Russian PM says Putin ‘out of it’, Ukraine war could last two years