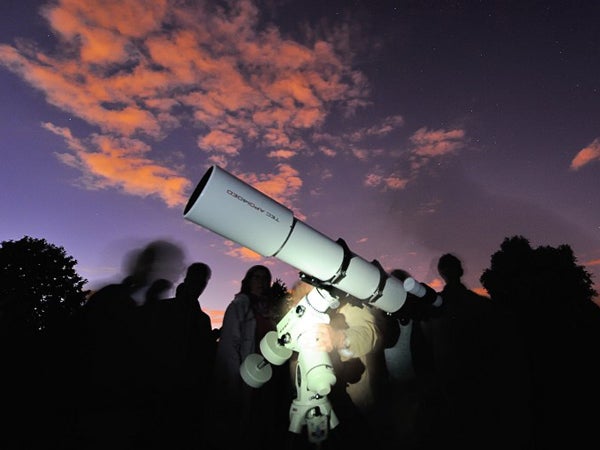 People observe the stars with a telescope on August 9, 2013 in Villeneuve-d’Ascq, northern France. AFP FILE PHOTO

MANILA, Philippines — A rare alignment of five planets will be visible to the naked eye throughout the month of  June, the Philippine Atmospheric, Geophysical, and Astronomical Services Administration (Pagasa) said.

Mario Raymundo, chief of Pagasa’s astronomical observation unit, said the planetary lineup of Saturn, Jupiter, Mars, Venus, and Mercury will appear above the horizon before sunrise.

(The alignment may be seen in the sky at around 2 or 3 a.m. Despite the distance of the planets from one another, they will look aligned from the Earth’s point of view. And this is rare because normally, only three to four planets in the alignment are visible in the sky.)

Aside from being a celestial treat for the eyes, Raymundo stressed this rarity has no other effect on Earth.

The Pagasa astronomer also noted that this visible five-planet alignment last occurred in 2004, setting it apart from a 2016 five-planet conjunction where Mercury was not observable above the horizon.

He added that similar phenomena took place in 2000 and 2010 as well, but only three planets were seen in the sky since the remaining two were lined up behind the sun, concealing them from the naked eye.

(The next five-planet alignment will happen in 2040. But from what I know, this will basically be the same scenario as 2000 and 2010, where two planets in the lineup weren’t seen in the sky.)