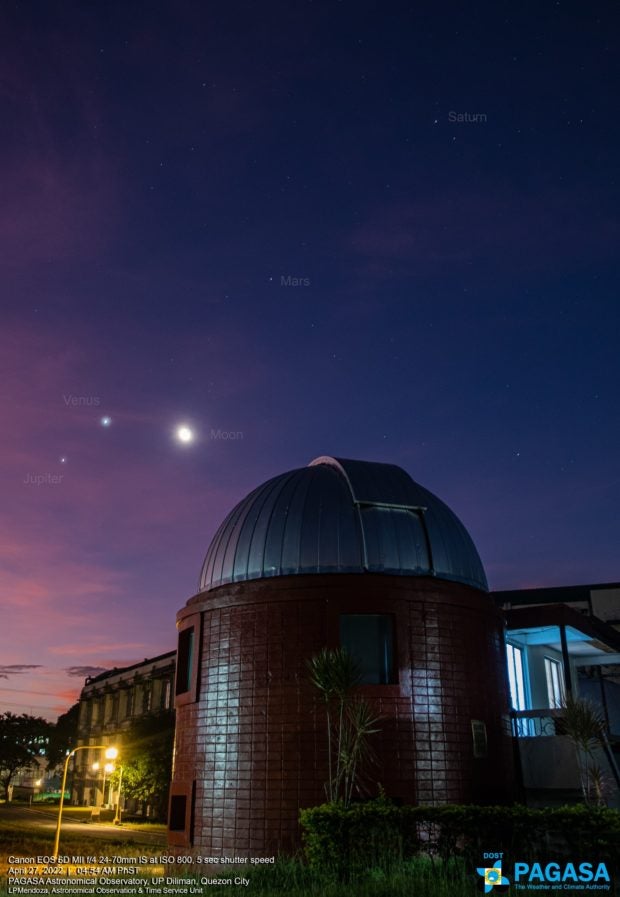 MANILA, Philippines — The celestial parade of four planets on a roughly straight line was observed before dawn on Wednesday, the Philippine Atmospheric Geophysical and Astronomical Services Administration (Pagasa) said.

Pagasa’s Space Science and Astronomy Section noticed the syzygy of Jupiter, Venus, Mars, and Saturn at 4 a.m. The state weather service said the celestial parade could be seen in the sky until the last days of April.

Planetary alignment known as syzygy, is a roughly straight-line configuration of three or more celestial bodies in a…

A syzygy is a practically straight-line arrangement of three or more celestial bodies such as planets.

Pagasa said the configuration of the said planets will not cause any adverse effect on the Earth.

“This kind of configuration of celestial objects has been observed through time and it never or will ever cause natural disasters and imminent hazards,” it pointed out.

A celestial parade of four planets, lining up in a perfectly straight line before dawn, is observable on the last few days of April. This astronomical phenomenon was observed at 4 AM this morning, April 27, 2022, by PAGASA’s Space Science and Astronomy Section. ✨Join us in this virtual telescope viewing session presented in celebration of the Global Astronomy Month (GAM), the world's largest annual event occurring for the entire month of April to celebrate Astronomy. GAM is the flagship event by Astronomers Without Borders to encourage everyone to go outside and enjoy the beauty of the sky. 🤩#AstroPH #AstronomyPH #PAGASAAstronomy