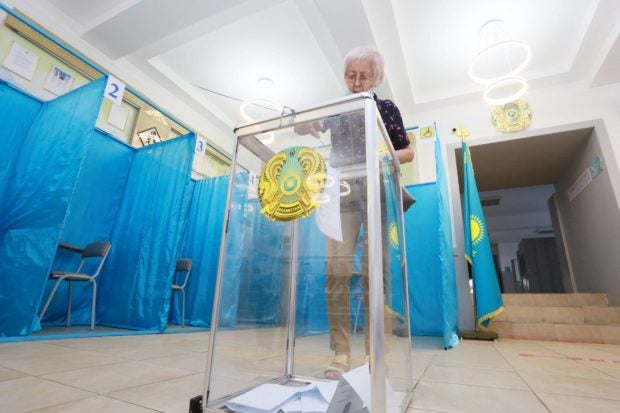 A woman casts her vote at a polling station as part of the vote for a referendum to overhaul the constitution in Almaty on June 5, 2022. AFP

The amendments are aimed at decentralisation, ending “super-presidential” rule and stripping the 81-year-old Nazarbayev of his national leader status and special privileges, and preventing future nepotism by barring the president’s relatives from holding government positions.

“The referendum can be considered validated,” national electoral commission chair Nurlan Abdirov said, claiming that 77 percent of voters had backed the move.

He reported a turnout of over 68 percent in Sunday’s referendum.

Widespread violence in January — which grew out of peaceful protests over a spike in car fuel prices — left more than 230 people dead and prompted authorities to call in troops from a Russia-led security bloc.

The drive for a “New Kazakhstan” in the wake of the violence has come from the man that Nazarbayev hand-picked to replace him as president in 2019, Kassym-Jomart Tokayev.

Tokayev, 69, on Sunday said that the referendum was only the beginning of his reform bid.

“The paradigm of relations between the state and society is changing, human rights are being put first,” he said after casting his vote.

Prior to January’s crisis, Tokayev was widely seen as ruling in the shadow of Nazarbayev and his super-rich relatives.

Even after stepping down as president, Nazarbayev retained the constitutional title of “Elbasy”, or “Leader of the Nation” — a role that afforded him influence over policymaking regardless of his formal position.

As the new constitution does not acknowledge this status, “we can say with confidence that the era of Elbasy is over,” Gaziz Abishev, a political analyst told AFP.

Another amendment prevents relatives of the president from holding government positions — a clear nod to the influence of Nazarbayev’s family and in-laws, who lost powerful positions in the aftermath of the violence.

Kazakhstan’s New Year crisis remains poorly understood, with a days-long internet shutdown at the peak of the unrest helping to further obscure the events.

Protests stirred in the oil-producing west over a New Year fuel price hike, but it was the largest city Almaty — 2,000 kilometres (1,200 miles) away — that became the epicentre of armed clashes, looting and arson.

The capital Nur-Sultan, which was called Astana prior to 2019, remained largely untouched.

Several voters in Almaty, Kazakhstan’s financial hub, recalled the violence that rocked the city in the first week of January as they trickled out of polling stations where turnout appeared low Sunday.

‘Changes for the better’

“It was like a boiler pot waiting to boil over,” Inesh Aitmanbekova said of the protests as she finished voting on Sunday. “These (constitutional changes) are quite small changes but we hope they are for the better.”

In the capital Nur-Sultan, named for Nazarbayev, a 46-year-old businessman called Bolat told AFP that he did not intend to vote.

“It’s a formality to cement the position of the current leadership. The result will be the same,” he said.

Tokayev has blamed the violence on “terrorists” seeking to seize power and issued a “shoot-to-kill” order to Kazakh troops.

But the arrest on treason charges of a Nazarbayev ally who served as national security chief at the time fuelled speculation that a leadership struggle was at the heart of the violence.

Both former and current presidents are allies of neighbouring Russia, and the arrival of a 2,000-plus detachment of peacekeepers from a Moscow-led security bloc bolstered Tokayev’s control over the situation in January.

The Kremlin claimed the intervention requested by Tokayev did not extend to any political settlement, which was “the internal affair of Kazakhstan”.

Nazarbayev on Sunday cast his vote in the capital that was named in his honour after he stepped down. In a rare interview last week he expressed support for Tokayev and the changes.

He also said that his relatives should be “held accountable” if they committed crimes but were entitled to a fair trial — an apparent reference to nephew Kairat Satybaldy, a businessman presently detained on embezzlement charges.