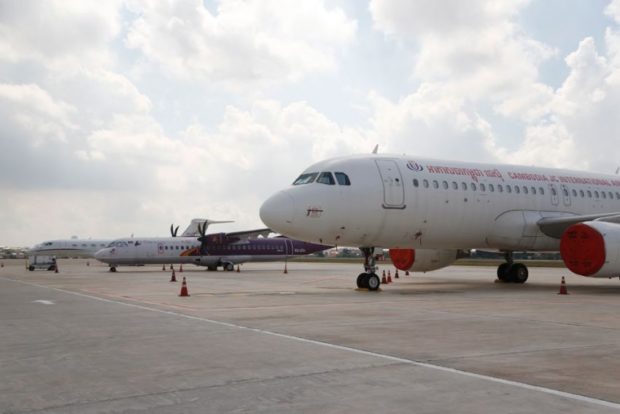 Cambodia Angkor Air was established in 2009 by the Cambodian government with Vietnam Airlines. Photo/Heng Chivoan via The Phnom Penh Post/Asia News Network

PHNOM PENH — The reorganization of Cambodia Angkor Air’s shareholders will enable it to play a role as a national carrier in expanding flights to new cities and destinations around the region and globally, said Pacific Asia Travel Association (PATA) Cambodia chapter chairman Thourn Sinan.

Sinan said in the past, national flag carrier Cambodia Angkor Air had not operated as a national airline because it had not made connections to other major cities and destinations, allowing the private airlines to expand their networks there.

“I am not concerned about who buys a stake, but it is important if the airline decides to become a national carrier. They should connect to large and new markets in order to open up destinations for private airlines to connect to later,” he said.

Sinan was commenting on Vietnam Airlines’ divestment of 35 per cent stake in Cambodia Angkor Air to a Chinese firm for $34 million via a share transfer agreement on May 31.

According to Fresh News, which quoted VnExpress, the divestment has left Vietnam Airlines with only 14 per cent stake in Cambodia Angkor Air, removing it as a subsidiary to the former.

Meanwhile, Tek Reth Samrech, chairman of Cambodia Angkor Air, told Fresh News on June 3 that Vietnam Airlines had been in talks to sell its stake prior to Covid-19, but the sale was delayed until recently.

This was because the Chinese company that acquired the 35 per cent stake in Cambodia Angkor specialises in civil aviation and is the third largest state-owned Chinese company operating in the tourism sector.

“The Chinese company’s entry will help Angkor Air’s business operations, particularly by getting it ready to receive Chinese passengers as China is at the end of the tight Covid-19 measures and might open access, as it was before Covid-19,” he said.

Cambodia Angkor Air currently operates daily flights to domestic destinations, and from Phnom Penh to Ho Chi Minh City once a week and to China.

The Fresh News report noted that Vietnam Airlines received $30 million on January 3, this year and another $4 million on March 29 from investors to acquire a stake in Cambodia Angkor Air.

In 2019, Vietnam Airlines received a $1 million deposit, bringing the total acquisition value to $35 million, representing a 35 per cent stake in Cambodia Angkor Air, which was established in 2009 by the Cambodian government with Vietnam Airlines.

Based on the joint venture agreement, the government would hold a 51 per cent stake while Vietnam Airlines possessed a 49 per cent stake.

According to VnExpress, Vietnam Airlines will dispose of the remaining 14 per cent by the end of this year.

Last year, Cambodia Angkor Air’s business activities, which were severely affected by the pandemic, resulted in a loss of $17.7 million, which expanded by 37.2 per cent from 2020, Viet Nam News reported.