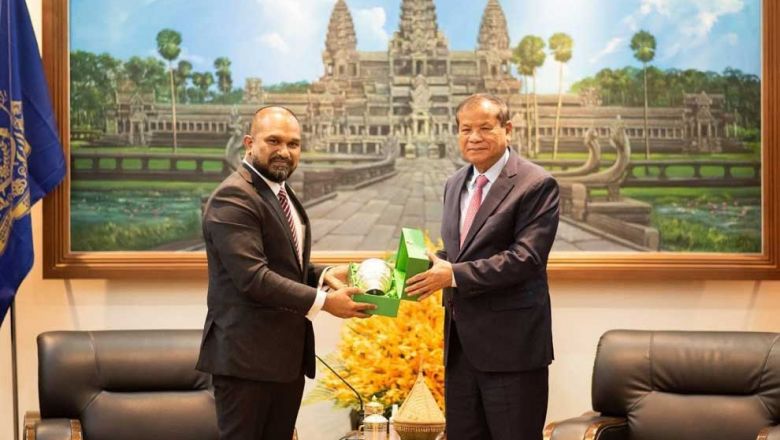 PHNOM PENH — Cambodia and the Maldives are considering launching direct flights between the two countries to promote travel, tourism cooperation and other forms of mutual support, as well as provide a well-needed boost to the beleaguered hospitality industry after two years of Covid-19, according to the tourism ministry.

Minister of Tourism Thong Khon on April 26 met with the newly-minted Maldivian ambassador to Cambodia with residence in Bangkok, Mohamed Jinah, at the tourism ministry, the Cabinet-level agency said in a statement on April 27.

The two sides discussed strengthening mutual support between the two countries and laying the foundation for a stronger degree of tourism collaboration down the road, especially within the framework of the World Tourism Organisation (UNWTO).

Jinah lauded Cambodia for its effectiveness in managing the Covid-19 pandemic, saying the vaccination campaign would remain the key to its economic recovery. He underscored the importance of the Kingdom’s role as the rotating chair of ASEAN, as well as its general position in the region, according to the statement.

The minister suggested that the overall situation in Cambodia had improved to near pre-pandemic normalcy, and said that the Kingdom would keep its focus on effectively controlling Covid-19, using community herd immunity as a key strategy for the resumption of economic activities.

“Socio-economic and tourism activities have also started back up in the ‘new normal’, although some safety measures continue to be implemented.

“Cambodia already accepts fully-vaccinated tourists, who need only show a vaccination card to … [enter the country] and apply for a visa-on-arrival.

“Cambodia is leading the way in reopening to international tourists, and the number of international travellers visiting Cambodia growing, as domestic tourism picks up as well,” the statement quoted him as saying.

The minister said the Kingdom is “ready” for the return of foreign holidaymakers, arguing that the government has developed a suite of infrastructure during the Covid-19 era to support the tourism industry, including networks of roads in Siem Reap and Preah Sihanouk provinces.

“We encourage reciprocal flights. Although the Maldives is a small country, it boasts numerous islands, so at a later date we could go learn from and experience the development of the country’s islands, and then develop islands in Cambodia,” Khon said.

The statement said that the two sides also agreed to draft a bilateral memorandum of understanding (MoU) on tourism cooperation and were “ready” to sign an Air Service Agreement “in the near future” to further cement tourism ties between the two countries.

Khon also revealed that Cambodia aims to host the joint meeting of the UNWTO Commission for East Asia and the Pacific in 2023, which the Kingdom is discussing with the UN agency, the statement said, adding that the Maldivian ambassador voiced support for the endeavour.