newsinfo / Headlines
Headlines
At 27, Manuel one of the youngest in 19th Congress 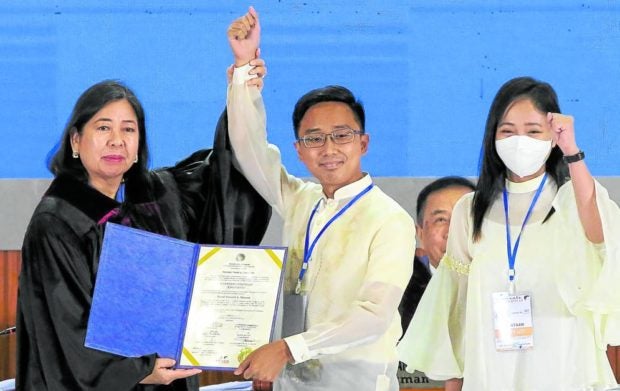 ILOILO CITY, Iloilo, Philippines — Since he was a boy, Raoul Danniel Manuel has been fascinated with numbers, patterns, problem-solving and logic.

He had a general weighted average of 1.099, higher than the 1.2 cutoff for the highest academic honor at the university.

Manuel’s perseverance in school will be a big plus for him when he joins the 19th Congress as a representative of Kabataan.

The progressive party-list group won a seat after garnering more than 530,700 votes, more than double the 194,970 votes it won in the 2019 mid-term elections.

Kabataan ranked 14th among the 55 party-list groups that will take part in the next Congress. At 27, Manuel will be one of its youngest lawmakers.

The oldest of five children from a humble family at Barangay Sto. Niño Sur in Iloilo City’s Arevalo District, Manuel became familiar at an early age with issues affecting farmers and workers.

When he was in grade school, his father left the country to work abroad while his mother sold beauty products to provide for the family.

As the family’s income was just enough for its basic needs, Manuel said it was a challenge for him to continue his studies, being the eldest child at that.

But he excelled throughout his schooling, earning praise from teachers and schoolmates.

Manuel graduated valedictorian in elementary at SPED Integrated School for Exceptional Children in 2007 and in high school at UP Iloilo in 2011.

Unlike other academic achievers, he was also active in social and extracurricular events, even becoming a cheerleader at UP Iloilo’s annual sports fests.

He was elected national president of the Katipunan ng Sangguniang Mag-aaral sa UP, the university’s organization of student councils from its different campuses, then a member of the UP Board of Regents.

‘For the greater good’

He went on to become president of the National Union of Students of the Philippines, the alliance of student councils nationwide.

Manuel said: “I never wanted to be a member of Congress … because I know how rotten traditional politics can be.”

“But as a member of the progressive bloc, I will help advance the interest of the youth and people in whatever venue or opportunity available,” he said in a telephone interview on Monday.

With his impressive scholastic record, Manuel could have easily gotten a top-paying job in the government or private sector.

But even as a student, “I told myself that I should be where I can maximize my skills for the greater good,” he said.

Manuel has been involved in the campaign for free higher education as well as in other social issues. As an activist, he said he has experienced being red-tagged.

According to Manuel, the account was later traced to a Navy officer.

Despite the Red-tagging, the incoming legislator said Kabataan as well as ACT Teachers and Gabriela will continue to push for laws for the marginalized.

The three party-list groups are what remains of the Makabayan bloc in the House of Representatives, from four in the outgoing 18th Congress.

But Manuel said he is undeterred by this fewer representation of progressive groups after Bayan Muna and Anakpawis failed to secure seats in the House.

“Bayan Muna and Anakpawis were the main targets of vicious campaigns of Red-tagging, harassment, attacks against its leaders and members, disinformation, and what we believe was vote-shaving. [But] this will not stop us from pursuing our new politics,” he said, adding that this has become more urgent under the incoming administration of President-elect Ferdinand Marcos Jr.

He counts as part of his legislative agenda the safe reopening of schools, assistance to students affected by the COVID-19 pandemic, an end to labor contractualization, and legislation that would help promote more jobs.

The votes won by Kabataan have shown “that the youth are standing up and fighting back against Red-tagging and other attacks,” Manuel said.