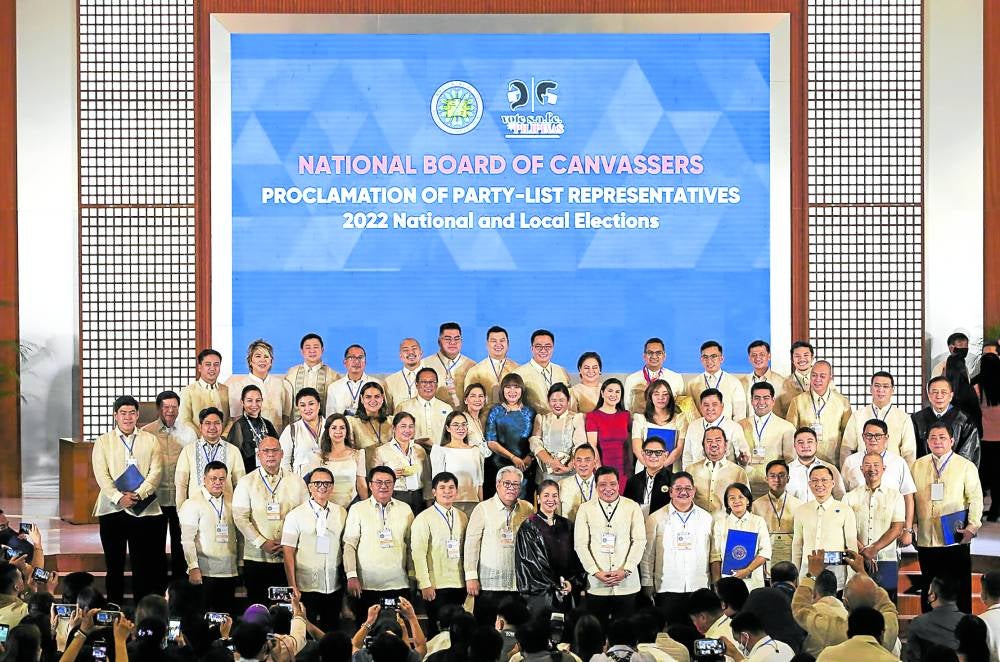 PARTY LISTED Majority of the 62 representatives of the 55 party list groups that were proclaimed winners on Thursday pose for a picture with officials of the Commission on Elections. The Constitution says they should represent the marginalized sectors but most of them are influential politicians and businessmen. —LYN RILLON

Party list group representatives who won seats in the 19th Congress supposedly to give voice to the poor and marginalized are mostly influential personalities in politics and business as well as allies of the outgoing and incoming administrations.

The Commission on Elections (Comelec) on Thursday proclaimed 55 party list groups winners in the polls with 62 seats in the House of Representatives. The party list groups are mandated by the Constitution to represent disadvantaged sectors.In applying the formula laid down by the Supreme Court in 2009, Comelec gave three party list seats to front-runner Anti-Crime and Terrorism Community Involvement and Support Inc. (ACT-CIS).

Its victory also means that its second nominee, Jocelyn Tulfo, wife of winning senatorial candidate Raffy Tulfo, would serve for another three-year term. Her two other party mates who got seats were Jeffrey Soriano and Edvic Yap, brother of Eric Yap, a former ACT-CIS representative who was appointed “legislative caretaker” of Benguet.

Those who clinched two House seats each for getting at least 2 percent of the total votes were 1-Rider, Tingog, 4Ps, Ako Bicol and Sagip. These groups are advocates of road safety, social welfare, livelihood, countryside development and poverty reduction.

Notable names from these five groups are reelectionist Yedda Romualdez, a former Leyte representative and wife of House Majority Leader Martin Romualdez; and reelectionist Rep. Rodante Marcoleta, who opposed the renewal of the ABS-CBN franchise and had dropped from the Senate race.

Three of the five progressive groups under the opposition Makabayan bloc made the cut: Kabataan, Gabriela Women’s Party and ACT Teachers. Anakpawis did not garner enough votes.

For the first time in 20 years, Bayan Muna, the main pillar of the progressive bloc, failed to win a seat in the House. It had three seats when it ranked second in the party list race in 2019.

Bayan Muna Rep. Carlos Isagani Zarate said that fake news, well-paid troll armies and rampant Red-tagging were used against his group and others, particularly against presidential candidate Vice President Leni Robredo, to undermine support for the opposition.Zarate cited constitutional prohibitions against government employees and officials from engaging in electioneering and partisan political activities which were violated by the National Task Force to End Local Communist Armed Conflict (NTF-Elcac).

“This Red-tagging task force do black propaganda against the opposition through spreading allegations and conspiracies without even an iota of evidence to back their claim,” he said.

Zarate said that a day ahead of the May 9 polls, a fake Comelec resolution was circulated physically and online claiming that the groups under the Makabayan bloc and senatorial candidates Neri Colmenares and Sonny Matula had been disqualified. It was already too late when the poll body denounced the document as bogus, he said.

Comelec Commissioner George Garcia earlier said that party list groups with pending cases may not be declared winners despite making it to the winning circle.

Gabriela disputed his statement, saying that it got a seat in 2019 even with a disqualification case lodged against the group.

Both Gabriela and Kabataan are facing separate disqualification cases filed by the NTF-Elcac last year.

Unlike the United Senior Citizen which was denied a seat despite ranking 38th in the partial vote count, Gabriela and Kabataan were accredited, while the former was not, Garcia said, after acknowledging that the two Makabayan parties were entitled to their respective seats.

“We wanted to be consistent with precedent. Otherwise, no one would be proclaimed,” he said. In his congratulatory message to the winners, Comelec Chair Saidamen Pangarungan said that party list groups “enable Filipino citizens belonging to marginalized, underrepresented and those lacking well-defined political constituencies to be represented in Congress.”

“Such groups are given a stronger voice so that all sectors may be included as our nation moves toward development and prosperity,” Pangarungan said during the proclamation ceremony held at the Philippine International Convention Center.

‘Still for rich and powerful’

But according to Danilo Arao, convenor of the poll watchdog Kontra Daya, about 90 percent of the winning party list groups had been flagged by his group for “not being truly representative of the marginalized and underrepresented.”

Arao called on the 19th Congress to act on bills amending the party list system that failed to gain traction in the past.

These would plug loopholes in the law that have allowed “the rich and powerful to hijack the party-list system,” he said.

“Public pressure is crucial in this regard because we have a Congress that is dominated by the rich and powerful. Most legislators need to be forced to act on measures like these that would obviously not serve their own selfish interests,” Arao told the Inquirer. —WITH A REPORT FROM JEANNETTE I. ANDRADE