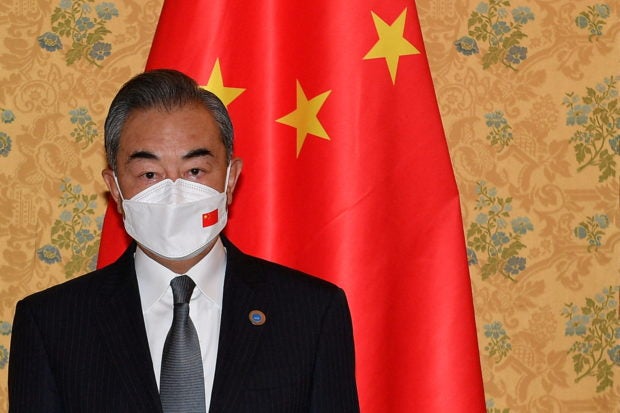 FILE PHOTO: Chinese Foreign Minister Wang Yi poses for a picture prior to meeting U.S. Secretary of State Antony Blinken on the sidelines of the G20 summit in Rome, Italy October 31, 2021. Tiziana Fabi/Pool via REUTERS/File Photo

SYDNEY — China’s Foreign Minister Wang Yi arrives on Thursday in Papua New Guinea, where tensions are high in the lead-up to a national election, and an official told media Beijing’s proposal for a regional security pact has caused resentment.

The timing of Wang’s visit has also been criticized by former Papua New Guinea prime minister Peter O’Neill, who is campaigning for the top job, in a series of media interviews where he said no agreements should be signed with China before the election.

It would be “improper” for China to donate security equipment or offer security support for the election, the Post Courier newspaper quoted O’Neill as saying on Thursday, after Australia’s broadcaster ABC reported Beijing would offer 2,000 body armor kits to police during Wang’s visit.

Wang is on a tour of eight Pacific island nations where he has signed a series of bilateral agreements on trade, fisheries, infrastructure and the supply of police equipment.

On Monday, a virtual meeting hosted by Wang in Fiji with counterparts from 10 island nations deferred consideration of a sweeping regional agreement spanning policing, security, fisheries, data and a free trade zone, proposed by China.

The United States and its allies have expressed concern about Beijing’s ambitions for security ties with Pacific island nations which control vast areas of resource-rich oceans and access to a region with strategic military significance.

“There has been resentment over Pacific Agreement on security matters,” Papua New Guinea’s Foreign Affairs secretary Elias Wohengu was quoted as saying by the Post Courier newspaper.

He indicated Papua New Guinea was unlikely to sign a security deal.

“On the security status of PNG, we will deal with it ourselves,” he added.

Resource-rich Papua New Guinea has defense ties with close neighbor Australia, which has agreed to upgrade a naval base there.

Papua New Guinea has been seeking increased sales to China for its LNG project.

Wang will meet with his counterpart Soroi Eoe on Friday, and pay a brief courtesy call on the Prime Minister James Marape, and was expected to sign an investment and energy agreement, the Post Courier reported.