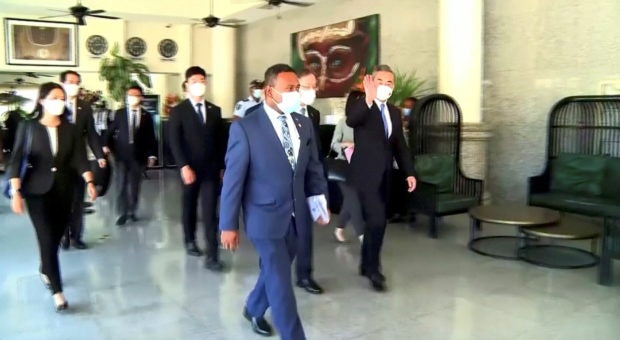 Samoa said it didn’t have enough time to consider a sweeping proposal from China for a regional trade and security pact, and has urged fellow Pacific islands to stay united as big powers seek more sway in the region.

China’s Foreign Minister Wang Yi on Tuesday arrived in Tonga on a tour through the region where Beijing’s ambitions for wider security ties has caused concern among U.S. allies.

On Monday, a virtual meeting hosted by Wang in Fiji with counterparts from 10 island nations deferred consideration of a sweeping agreement spanning policing, security, fisheries, data and a free trade zone, proposed by China.

Samoa’s Prime Minister Fiame Naomi Mataafa was among the island nation leaders who called for a delay, and wants major decisions on the region to go through the Pacific Islands Forum group, Samoan media reported on Tuesday.

“We have not made a decision as we did not have enough time to look at it,” Samoan news service Talamua quoted Fiame as saying.

Niue’s leader on Monday evening also issued a statement saying more time was needed to consider “how the arrangement with China will support existing regional plans”.

A draft communique and five year action plan had been sent by Beijing to the nations with diplomatic ties to China weeks in advance, but was leaked amid criticism the deal would bind the nations closely to China, and raise geopolitical tensions with the United States.

Despite their small populations and economies, each Pacific state represents a vote at international forums such as the United Nations. They also control vast swathes of resource-rich ocean and access to a region with strategic military significance.

Talamua reported Fiame said a recent security pact signed between China and the Solomon Islands should also be discussed at the Pacific Island Forum, which also includes members that recognise Taiwan and not Beijing.

“It’s important that we have the chance to consult and have a combined voice on the region’s position in order to have an impact,” she was quoted as saying.

Her media spokesman declined to comment to Reuters, because Samoa was holding 60th anniversary of independence celebrations on Tuesday.

Wang arrived in the kingdom of Tonga on Tuesday, according to the Chinese embassy in Tonga.

Tonga, which was hit by a volcanic eruption and tsunami in January, owes two-thirds of its external debt of $195 million to China’s Export-Import Bank, its budget shows.

Australia and New Zealand coordinated U.S. allies in a relief operation involving defence flights and naval vessels in the aftermath of the volcanic eruption, with China also sending aid and equipment on naval vessels in a highly publicized relief effort.