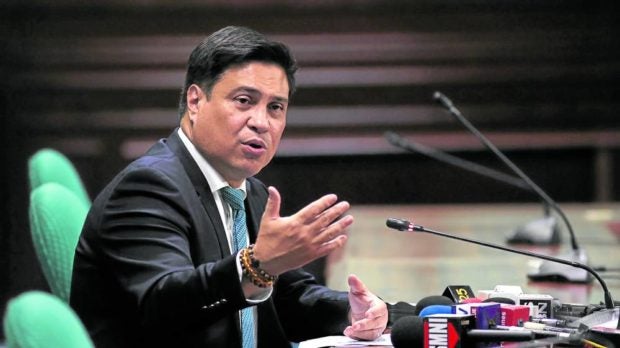 MANILA, Philippines Barring last-minute surprises, Majority Leader Juan Miguel Zubiri will lead the Senate in the 19th Congress, with his main rival Sen. Cynthia Villar failing to muster the numbers needed to win the presidency of the 24-member chamber.

“He will do well. He was my bet,” outgoing Senate President Vicente Sotto III said of Zubiri, 53, who has a reputation for consensus-building.

On Wednesday, Villar, a stalwart of the Nacionalista Party, told reporters that the fight for the Senate presidency was over. Asked if she would want a term-sharing deal with Zubiri, the wife of billionaire tycoon and former Senate President Manuel Villar and a billionaire herself said: “I don’t want it anymore. I want a simple life.”

Until her decision to bow out of the race, Villar enjoyed the support of at least seven senators including her party mate Sen. Imee Marcos, the elder sister of President-elect Ferdinand Marcos Jr., and the members of the ruling PDP-Laban.

Zubiri, on the other hand, had the backing of the so-called Seatmates bloc, which includes incumbent, returning and reelected senators.

“They will be taken care of by the president,” Villar said of her allies, indicating her intent to still be part of the majority.

By tradition, the majority bloc in the Senate is composed of those who vote for the winning president of the chamber; the minority bloc is made up of the losing candidate and his/her supporters.

Villar’s decision to give way to Zubiri ahead of the convening of the 19th Congress in July indicates that the latter will likely have the chance to build the desired “supermajority.”

Only Senators Risa Hontiveros and Aquilino Pimentel III have declared their intent to be in the minority, although the siblings Senators Pia Cayetano and Alan Peter Cayetano are also reportedly considering joining the bloc.

Villar said she had spoken with Zubiri and informed him of her decision to back his candidacy.

“He was very pleased,” she said.

Speaking to reporters, Zubiri expressed gratitude to Villar “for her support, graciousness and magnanimity in helping me form a supermajority.”

“A united Senate is a productive one. From the very beginning, I’ve always wanted to form a supermajority in the Senate, so I would like to thank from the bottom of my heart Ma’am Cynthia Villar,” Zubiri said.

“I’d also like to thank all my colleagues who believe in me and put their trust and confidence in my ability to lead the Senate in the 19th Congress,” he said.

Sen. Juan Edgardo Angara will stay on as chair of the powerful finance committee, who leads budget discussions, while Sen. Sherwin Gatchalian will be in charge of the ways and means or the tax-writing committee, replacing Pia Cayetano.

Senator-elect Francis Escudero will lead the justice committee, taking over from Sen. Richard Gordon, who lost his reelection bid. Sen. Nancy Binay will head the accounts committee, which is responsible for the chamber’s finances, replacing outgoing Sen. Panfilo Lacson.

Zubiri said Sen. Joel Villanueva would replace him as the next majority leader.

He said he was considering Sen. Francis Tolentino as the next chair of the blue ribbon committee that leads investigations on official wrongdoing. Tolentino will be taking over from Gordon if he accepts the post.

As for Villar, she will retain the environment and agriculture committees, Zubiri said. Sen. Grace Poe will likewise retain the public services and banks committees; Binay the tourism committee; Gatchalian the basic education committee; and Sen. Bong Go the health and sports committees.

The chairmanship of the foreign affairs committee has been offered to Marcos, Zubiri said.

The announced posts are not final pending the actual election when the Senate convenes in July.