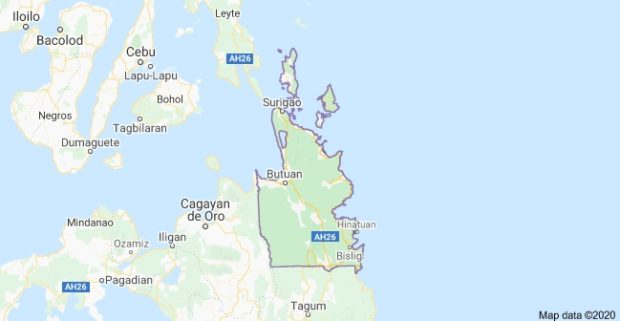 The Caraga Region in Mindanao (Image from Google Maps)

MANILA, Philippines — The Philippine Economic Zone Authority (Peza) has partnered with the Department of Environment and Natural Resources (DENR) to look for lands that could be proclaimed as economic zones, with the Caraga Administrative Region being considered as the pilot area.

Peza signed a memorandum of understanding (MOU) with the DENR on Tuesday for the two agencies to work together to identify viable lands under the DENR’s jurisdiction.

“We are in the advanced stages of identifying potential ecozone areas in Caraga and there are seven. We are hoping to forge a (memorandum of agreement) within the administration of President Duterte or before June 30,” Assistant Secretary Michelle Go of the DENR said.

Environment Undersecretary Ernesto Adobo Jr. said they were looking at lands with contracts that have been rescinded by the government and mineral product sharing agreements that are about to expire.

The region of Mimaropa is also being looked at as a potential area, but he did not elaborate.

“The MOU signing will serve as an initial and broad framework of understanding between Peza and the DENR toward the goal of identifying public lands nationwide that can be harnessed in a sustainable and environmentally compliant manner,” said Peza Director General Charito Plaza. “[This is] to spread ecozones because they are drivers of economic growth outside the National Capital Region (NCR).”

Under the MOU, the DENR agrees to provide an inventory of public lands and islands under its jurisdiction to Peza in order to explore feasible development of sustainable mineral and agro-forestry processing economic zones, oil depots, refinery ecozones, eco-tourism and agro-industrial special economic zones.

“We agreed with DENR for them to identify available production areas in every region. So initially, it is the Caraga region that is ready with their list and one goal is also for us to restore back the wood industry,” Plaza said.

“Caraga happens to be the biggest timberland in the country. It also has the biggest mining lands in the country. So to put the goal of creating environment-friendly industries and green sustainability and smart ecozones, Caraga will be the first and other regions will follow,” she said.

Investors in related industries will be invited later on.

The DENR will also provide technical assistance to Peza in the formulation of proposals that will include the adoption of a Programmatic Environmental Impact Statement approach for the identified special economic zones.

Peza and the DENR may also constitute a technical working group that will study, formulates and recommend policies to be adopted and observed by both agencies in implementing the MOU.

An ecozone is a specified area subject to different economic regulations that are considered conducive or attractive to both foreign and local investors. Companies locating in these ecozones enjoy additional economic advantages, particularly tax incentives, compared to business establishments outside the zones.

The Duterte administration had pushed for the development of ecozones outside NCR to help boost regional economies. It already suspended the issuance of new ecozone permits for Metro Manila to make prospective investors locate in the provinces.

Increasing the number of ecozones will also help boost Peza-registered investment pledges, which plummeted by 68 percent to P8.14 billion in the first quarter this year from P25.38 billion recorded in the same period last year.

Peza had blamed the dismal first quarter performance, which was also below the P16.5 billion in pledges it attracted in the first three months of 2020, on the lingering effects of the COVID-19 pandemic as well as uncertainties surrounding the general elections and the impact of Russia’s invasion of Ukraine.

Plaza had said that the significant drop in investment pledges in the first quarter was “anticipated because the pandemic is still there. Then we have the [Russian invasion of Ukraine]. Then the election.”

“Usually, during election period, investors will wait for what is going to be the results of the elections because they already anticipate that there will surely be new policies and laws and rules that will be adopted by the new administration. You would usually see that during election periods,” she added.

Adding new ecozones will likewise help accommodate the expected influx of investments following the passage in March last year of the Corporate Recovery and Tax Incentives for Enterprises Act.

Trade and Industry Secretary Ramon Lopez had described the reform law as a “game-changer,” in that it would bring in “[a] massive inflow of investments that will create more jobs.”

Finance Secretary Carlos Dominguez III had also called it “one of the largest economic stimulus measures in the country’s history.”