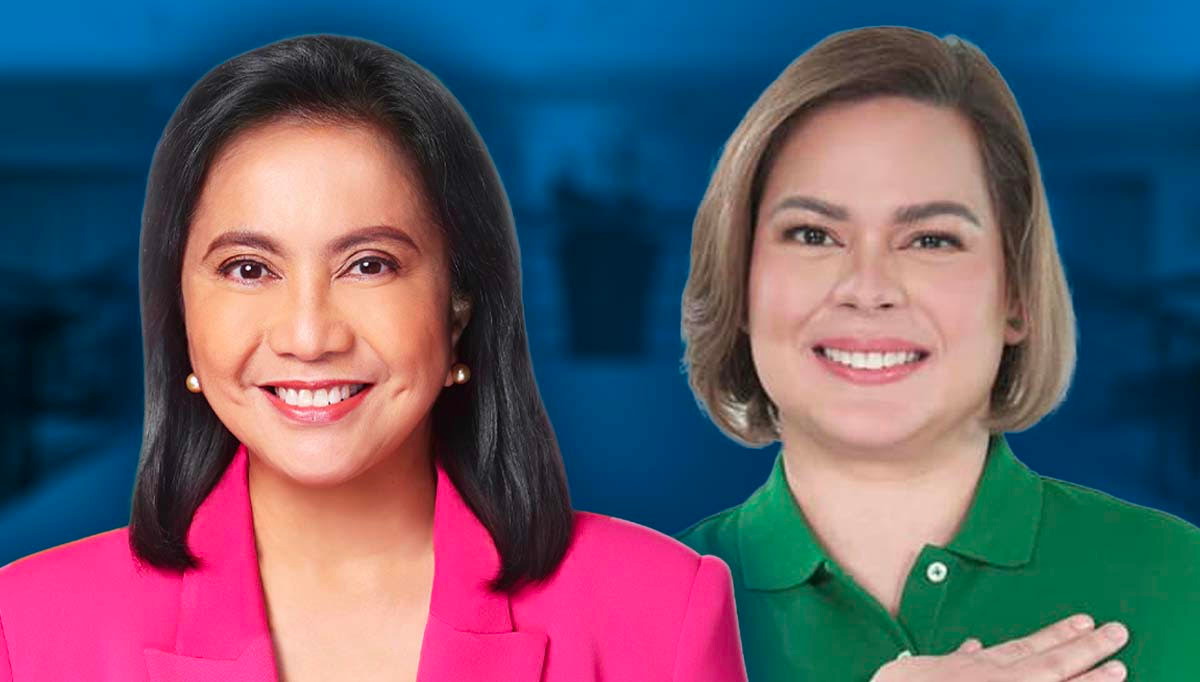 MANILA, Philippines—While Vice President Leni Robredo already started packing her things in her office in Quezon City on Monday (May 30), a political science professor said she will leave the office with a mark.

Prof. Maria Ela Atienza, of the University of the Philippines Diliman, said Robredo, in the past six years, was “attacked and sidelined” by the Duterte administration and that her office was given a very small budget—all because she was from the opposition.

“However, she managed to get partners and ran the Office of the Vice President (OVP) with focus on the needs of the disadvantaged through programs on livelihood, disaster response, and even COVID-19-related projects,” Atienza told INQUIRER.net.

Last Tuesday (May 31), Robredo’s spokesperson, lawyer Barry Gutierrez, said these initiatives which the OVP carried out even with “limited mandate and resources,” will be presented to Vice President-elect Sara Duterte-Carpio.

READ: Robredo spox: We’ll brief Sara Duterte on our programs, but up to her to continue them

Gutierrez told ANC that Robredo and her staff will brief President Rodrigo Duterte’s daughter about the OVP’s programs in the past six years, especially Angat Buhay, Vaccine Express and Bayanihan E-Konsulta.

“It’s up to the Vice President-elect whether she will want to actually receive this information and perhaps, more significantly, whether she would want to continue many of these programs,” he said.

Robredo said she was ready to meet with Sara as she congratulated her on her election as the country’s 15th vice president. She said she will answer any questions that Sara may have regarding the OVP and to take all the needed steps for a smooth transition.

What came from OVP?

As Atienza said, Robredo’s office was given a very small budget. This, as she likewise had to endure Duterte’s hostility even if she had been taking light steps to show the President that she wasn’t a threat. 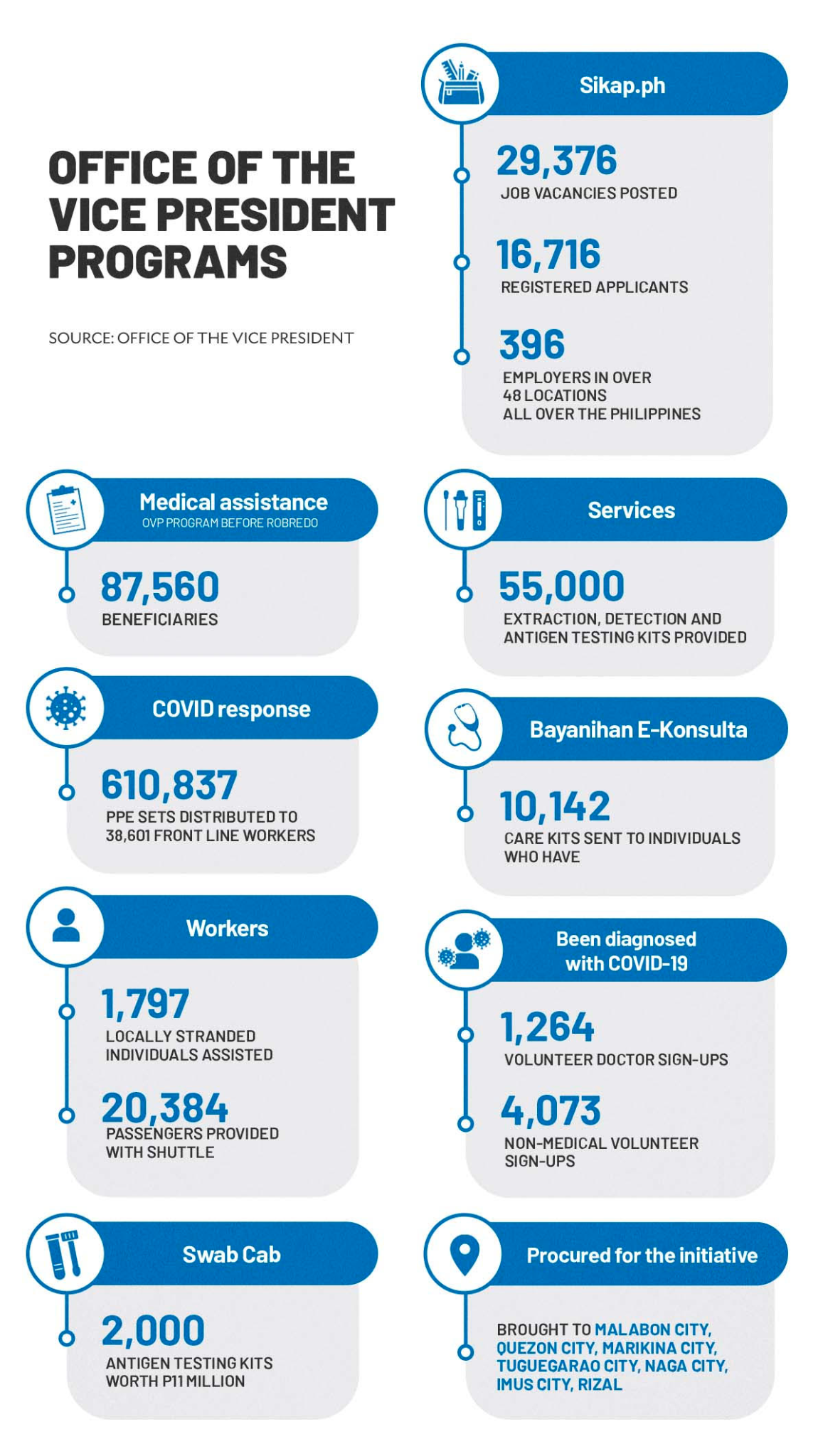 This, however, did not keep the office from displaying its commitment to serve Filipinos, especially those severely hit by the health and economic crises since 2020—the commitment that made lawmakers seek a higher budget for the OVP. Here’s a look at the programs that Robredo’s office offered to Filipinos, especially the poor, since she took her oath as the country’s 14th vice president on June 30, 2016 after winning in the election with 14,418,817 votes.

The main public service program of the OVP before Robredo took the lead, the MAP provides help for the poor and disadvantaged Filipinos who need medical assistance. Eligible individuals are given financial assistance not exceeding P20,000.

Robredo said that from August 2016 to August 2021, the OVP spent P1.15 billion on the program, which already helped 87,560 individuals. The OVP also had 30 partner hospitals and service providers to reach more Filipinos who are in need.

Launched in October 2016, Angat Buhay, which aims to bring together public and private organizations and individuals to address Filipinos’ needs, has become the OVP’s contribution in the fight against poverty.

As Robredo is set to step down on June 30, she said last May 13 that she will launch the “widest” volunteer initiative in the Philippines—the Angat Buhay NGO which she said will extend help to more Filipinos who are in need.

The Bayanihan E-Konsulta, a free tele-consultation service that was launched in April 2021, has received 1,264 volunteer doctor sign-ups and 4,073 non-medical volunteer sign-ups as the program received over 25,000 consultation requests.

Last January, Robredo said a total of 10,142 care kits have been sent to individuals who have been diagnosed with COVID-19 since her office launched the program last year.

The care kit provided by the OVP has a thermometer, oximeter, medicines, oral antiseptic, as well as a box of face masks, a bottle of alcohol, garbage bags, and disinfectant.

The program, which was commended for its efficiency, was replicated by the Department of Health last January, when Omicron, a variant of SARS-CoV-2, caused a rise in COVID-19 cases.

The Bayanihan E-Konsulta, which was available in Metro Manila, Bulacan, Cavite, Laguna and Rizal, already ended its operations last Tuesday (May 31) with an expression of gratitude to all volunteers.

The OVP’s initiative with local government units, the office provided vaccinators to hasten the administration of COVID-19 vaccines.

The Swab Cab, which is likewise one of Robredo’s responses to the COVID-19 crisis, has procured 22,000 antigen testing kits worth P11 million. The program has so far tested 9,757 people in communities with high transmission rates. 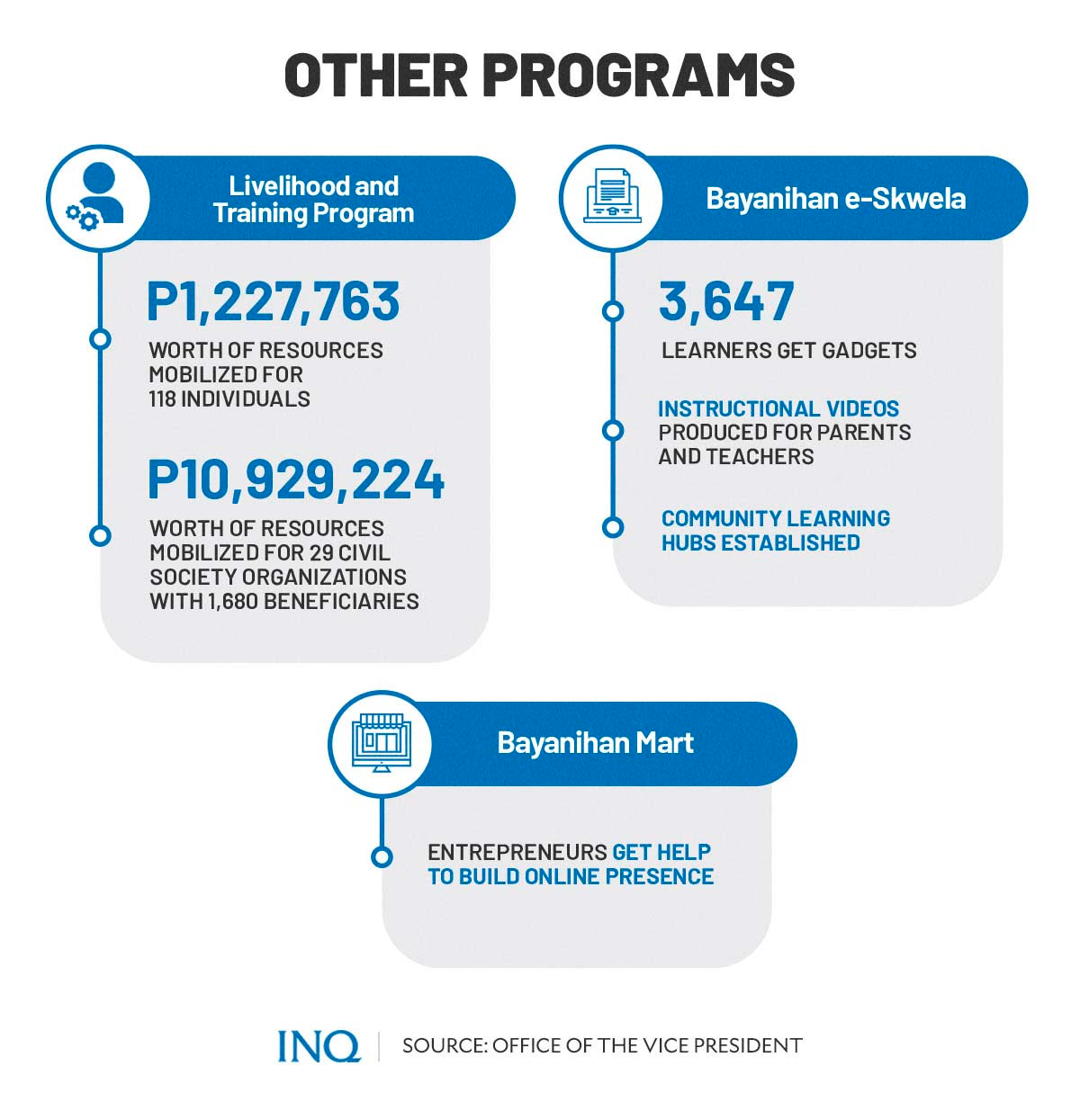 The OVP also assisted individuals who lost their livelihoods by launching Sikap.ph in September 2020. The program has so far posted 29,376 job vacancies while the platform is already populated with 16,716 registered applicants and 396 employers.

To help micro, small, and medium enterprises, the OVP also launched the Bayanihan Mart to assist entrepreneurs in building an online presence and increase income despite the health crisis.

Its Sustainable Livelihood and Training Program also helped individual applicants and civil society organizations (CSOs). The OVP has mobilized P1,227,763 for 118 individuals and P10929,224 for 29 CSOs with a total of 1,680 beneficiaries.

When the Department of Education (DepEd) said that it will implement blended learning, Robredo launched the Bayanihan e-Skwela to provide gadgets to learners in need; produce instructional videos for parents and teachers; and establish Community Learning Hubs or alternative learning spaces.

In 2021, Robredo said 3,647 gadgets were already donated while 23 videos were produced, all of which are available in Bayanihan e-Skwela Facebook and YouTube channels.

Community Learning Hubs  were likewise established in 58 locations all over the Philippines. It benefitted 5,696  individuals through 832 volunteers and the OVP’s over 12 partner organizations.

Unlike vice presidents before her, Robredo was only given a short stint in the Cabinet–as head of the Housing and Urban Development Coordinating Council (HUDCC) for five months.

Robredo was designated by Duterte as head of the Inter-Agency Committee on Anti-Illegal Drugs (ICAD) with the Philippine Drug Enforcement Agency (PDEA) chief then, Aaron Aquino.

However, less than a month after working in the middle of an atmosphere of distrust by the President and his men and threats that she would be fired if she helped foreign investigations into the bloody anti-drug campaign, Robredo was removed from ICAD. This was far from how Joseph Estrada, Gloria Macapagal-Arroyo, Noli de Castro and Jejomar Binay served as vice presidents—Estrada was chairman of the Presidential Anti-Crime Commission (1992 to 1997); Arroyo was secretary of the Department of Social Welfare and Development (1998 to 2000); while De Castro (2004 to 2010) and Binay (2010 to 2015) were HUDCC chairman.

For Atienza, the lack of a Cabinet post affected Robredo’s public visibility: “Together with disinformation and fake news, her lack of a high profile Cabinet position contributed to the initial difficulties at the beginning of her campaign for the presidency.”

“She was less well-known and hence the low trust ratings in the surveys compared with her predecessors,” she said.

In the May 9 elections, she lost her presidential bid to Ferdinand Marcos Jr. who received 31,629,783 votes against Robredo’s over 15 million votes.

Atienza said the lack of a Cabinet post enabled Robredo to concentrate on OVP programs that reflect her priorities.

With regard to Sara, who was designated by Marcos as his education secretary, Atienza said the post will require a lot of attention.

“We are not sure if the new VP-elect will continue the programs of the current VP. There is no obligation to do so and she may have her own pet projects and programs. At the same time, the incoming VP has a Cabinet portfolio, the DepEd, which will require a lot of attention,” she said.

However, if Sara decided to stop the programs, public perception will depend on her continued popularity and whether she will be successful in her role as education secretary.

“If she retains her popularity with the public like her father, the specific achievements (if there will be) of the OVP and/or the DepEd may not be a clear contributory factor,” she said.