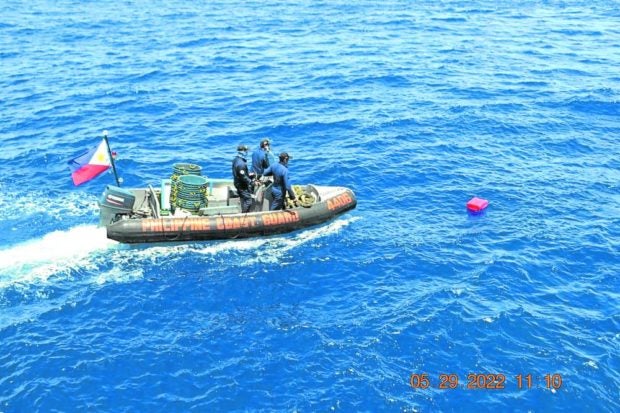 PUERTO PRINCESA CITY, Palawan, Philippines — The Philippine Coast Guard (PCG) has already tracked the possible location of the sunken fishing vessel that collided with a foreign commercial vessel in the waters near Maracanao Island in Agutaya town, Palawan province, on May 28, an official said on Monday.

However, the seven fishermen earlier reported missing could still not be located even as authorities have doubled their efforts on Monday to locate them.

“Our BRP Suluan has already located the debris of the sunken fishing boat. This is an indication that we’re scouring the right area for the possible location of the missing fishermen,” Supangan told the Inquirer.

BRP Suluan (MRRV 4406) is a multirole response vessel based in Palawan.

Supangan said an initial assessment of the search and rescue team showed there were no survivors found among the debris.

“So we have widened the area to be scoured by our rescue vessel,” Supangan said, noting that the team had already moved toward the Semirara Island and northwest of the Panay Peninsula.

The PCG Aviation Force on Monday also deployed a plane to conduct an aerial search within the vicinity of the waters off Palawan to expedite the search.

The Filipino fishing vessel FB JOT-18 collided with MV Happy Hiro, a cargo vessel sailing under the flag of the Marshall Islands, 14 nautical miles (26 km) off the coast of Maracanao Island.

At least 13 other boat crew members were already rescued by another fishing vessel before they were transferred to the MV Happy Hiro, which came from China and was on its way to Australia when the collision happened.

Except for Petiero, who is from Estancia town, Iloilo province, all of the rescued boat crew members are from Bantayan Island in Cebu province.

The rescued fishermen were ferried to Barangay Lipata in Culasi town, Antique province, and are now under the custody of the PCG Antique.

The PCG said that aside from its BN Islander Plane, the Philippine Air Force also sent a plane while the Philippine Navy provided an additional vessel for the search and rescue operations. PCG spokesperson Commodore Armand Balilo said they also sent a notice to mariners so that transiting vessels in the area could inform the PCG of possible sightings of the fishermen.

“We want to assure the families that the search and rescue operations will continue. We will also check neighboring coasts where the missing fishermen could have been carried to by the waves,” Balilo said.

—WITH REPORTS FROM TINA G. SANTOS AND NESTLE SEMILLA