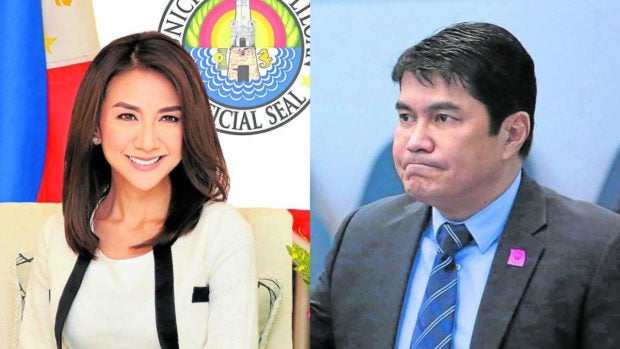 Angeles said the nominees were chosen “generally for their experience in public service and proven service records.”

Frasco was the recipient of the Presidential Lingkod Bayan regional award from the Civil Service Commission in its 2021 search for outstanding government workers, according to Angeles.

She said Frasco was also named the top performing mayor in the Central Visayas region.

Frasco won her third term as mayor of Liloan in the recent May elections. A lawyer, professor, and businesswoman, she served as the spokesperson for Sara Duterte, daughter of President Rodrigo Duterte, during the election campaign.

She was also the vice president of the League of Municipalities of the Philippines’ Visayas cluster for the term 2019 to 2022.

Frasco is the daughter of Cebu Gov. Gwendolyn Garcia and the wife of Cebu Rep. Vincent Franco “Duke” Frasco.

Pangandaman, currently assistant governor and chief of staff at the Bangko Sentral ng Pilipinas (BSP), started her career as a researcher in the Senate. She later became head of the policy research group, political and constituency, and later chief of staff in the office of then-Senate President Edgardo Angara.

Pangandaman also worked as chief of staff of Senator-elect Loren Legarda, who said the incoming budget chief “brings to the table a deep-seated knowledge of the budget and legislative process (and is) a dedicated government worker with an exceptional work ethic.”

In 2016, Pangandaman served as assistant secretary in the DBM and was appointed undersecretary and concurrent director of the budget technical bureau in 2018.

She later joined the BSP as a technical adviser and subsequently became managing director. In 2021, Pangandaman was named assistant governor of the BSP.

According to Angeles, “(Pangandaman) has over two decades of policy development in finance expertise.”

Angeles described Uy as “an expert in technology law (and) well-experienced in information technology project management.”

She noted that Uy “oversaw the formulation of the Philippine digital strategy for 2011 to 2016,” and added that the lawyer was an international commercial arbitrator on areas involving IT-related disputes.

Uy was chair of the Commission on Information and Communications Technology during the late President Benigno Aquino III’s term. He also served as chief information officer and director of the management information systems office of the Supreme Court.

A member of the Philippine bar, he is well-known in the Philippine legal and IT circles. He is a cyberlaw expert and also lectures on computer forensics, cybercrime, electronic evidence, e-commerce and digital ethics.

As for Tulfo, Angeles said the media personality “is known for his involvement in covering and helping Filipinos here and abroad through his social programs and partnerships with other organizations,” Angeles said.

Tulfo, she said, has been in public service, “doing social work [for] three decades.”

He works as a broadcaster in the government media channel, People’s Television Network, and previously as a news anchor for media network TV5. He also hosted shows produced by his brother, Ben, who owned Bitag Media Unlimited Inc., which is known for hard-hitting public service programs.

Tulfo also backed the Anti-Crime and Terrorism Community Involvement and Support Inc. (ACT-CIS), the front-runner party list in the May 2022 national elections.

As for the PMS secretary nominee, Angeles said that Angping “comes with the professional experience in the fields of public service and administration and international relations and diplomacy.”

Angping served as a congresswoman in Manila’s third congressional district for nine years. She is also a member of the Marcos Jr. transition team.

She is the wife of former Philippine Sports Commission chair Harry Angping.

Just last week, Marcos announced key appointments to his economic team, emphasizing his incoming administration’s focus on steering the economy out of a slump.

A day after he and Duterte were proclaimed winners by Congress in the May 9 polls, Marcos said he was nominating BSP Gov. Benjamin Diokno as his finance secretary and former National Economic and Development Authority chief Felipe Medalla as BSP governor.

Angeles also said that there was no formal invitation yet for President Duterte to join his successor’s executive family.

Angeles clarified reports that Marcos was eyeing President Duterte to be the drug czar under his incoming administration.

“That was during the first interview, postproclamation interview. (Marcos’) words were that it wasn’t a formal invitation. But if [Duterte] should want to, he certainly would be considered,” Angeles said.

Bongbong Marcos: President Duterte can join Cabinet if he wants to