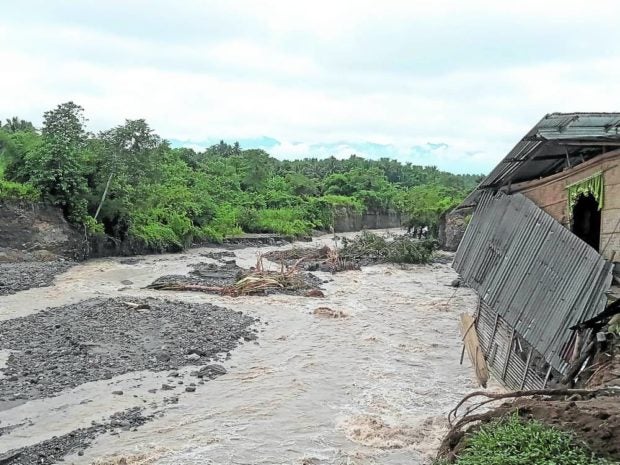 COLLAPSED | A house in Purok Lower Libertad, Barangay Topland in Koronadal City is destroyed after a portion of a riverbank collapsed due to heavy flooding Sunday night. (Photo courtesy of DONDIE BAYONA)

Rolly Doane Aquino, head of the Provincial Disaster Risk Reduction and Management Office (PDRRMO), said heavy flooding was reported along the riverside and lowland communities in Koronadal City and the towns of Norala, Sto. Nino, Tampakan and Tantangan in the province.

He said 27 families from Barangay Lapuz in Norala and four in Purok Lower Libertad, Barangay Topland, in Koronadal City, were forced to leave their homes on Sunday night due to the rising floodwaters while a house near the river in Barangay Topland was destroyed.

A household in Barangay Katipunan, Sto. Niño town, and another in Tantangan town were submerged in water, according to reports from the PDRRMO and the Bureau of Fire Protection.

Aquino said a dike protection along the Marbel River in Purok Ferry, Barangay Gen. Paulino Santos in Koronadal City, had collapsed while a portion of the road and a bridge in Sitio Tucalabong, Barangay Crossing Rubber, in Tupi town was damaged by rampaging floodwater.

“The affected road [in Tupi] is still not passable as of this time and we’re working with concerned offices to address this,” he said at a briefing Monday.

Siegfred Flaviano, Provincial Environment Management Office chief, said they were currently monitoring the water level in critical waterways, particularly that of the Allah River, due to the continuing cloudy weather in the area.

Allah River, the biggest river channel in the province, traverses at least nine towns and a city in the provinces of South Cotabato and Sultan Kudarat. It drains toward the Liguasan Marsh in Maguindanao and eventually to the Rio Grande de Mindanao and the Moro Gulf.