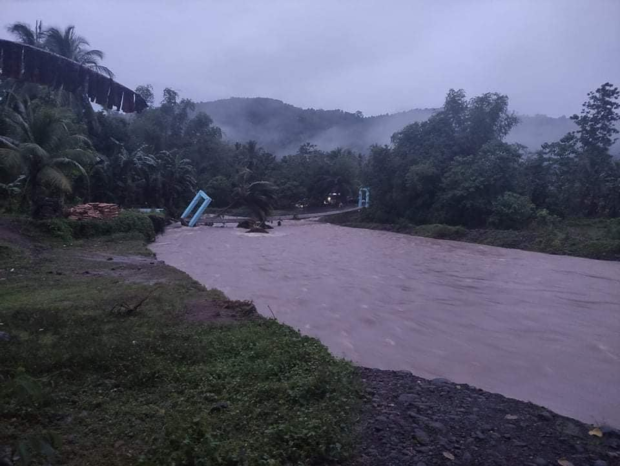 In President Roxas, Cotabato province, a footbridge in Purok 1, Barangay Idaoman, was damaged due to a heavy downpour that caused the Kabacan River to overflow. (Photo by MOSQUERA WENGGAY / Contributor)

COTABATO CITY, Maguindanao, Philippines — Six hours of heavy rain triggered flash floods and caused rivers to overflow in the provinces of Maguindanao, Cotabato, and Sultan Kudarat on Tuesday, displacing at least 1,000 families in one village alone.

Maguindanao Gov. Bai Mariam Mangudadatu said she had sent a team of rescuers and other personnel to Barangay Saniag of Ampatuan town, where at least a thousand families had been displaced, some of them trapped in their homes due to flash floods.

She said the disaster workers were still in the field gathering data as to the extent of the damage to properties, infrastructure, and agricultural crops.

While assessment and evaluation were being conducted, relief workers were also distributing goods and food packs to affected families.

As of 5 p.m. on Tuesday, April 26, linemen of the Sultan Kudarat Electric Cooperative (Sukelco) posted a video on Facebook, showing how the rampaging waters turned the national highway in Barangay Paril in Kalamansig town of Sultan Kudarat into a raging river.

Flash floods were also reported in the towns of Talayan and Guindulungan, Maguindanao as of 2 a.m. Wednesday, Mangudadatu said, citing reports that had reached her.

Residents of Barangay Tambunan in Talayan were not able to sleep when a flood submerged surrounding residential areas.

Tantangan Eskak, a resident of Barangay Tambunan, said he and his family were awakened when rising water from the Tambunan river nearby had entered his home at past 2 a.m.

“We have experienced continuous rain in the last six hours and suddenly we wake up to be underwater,” Eskak said. He said he thought it was just an ordinary weather disturbance but now, it was affecting the observance of the holy month of Ramadan more difficult for his family.

Eskak, a Muslim, said he, his family, and his neighbors who observed the fasting month of Ramadan had faced a lot of difficulties since aside from the floods, they also had brownouts in their area.

“Floods and brownouts make life very difficult for us because we are fasting,” he said.

In Kalamansig, Sultan Kudarat, the upland part of Barangay Paril was turned into a river when a flash flood hit Sitio Babangkaw, according to the Sukelco linemen, who posted a photo of the rampaging water on Facebook.

Sukelco said power lines were toppled by strong winds and the force of heavy downpour along the borders of Kalamansig and Palimbang towns, causing power service interruption in the area.

No fatalities were reported so far, according to the Maguindanao provincial disaster office, but similar flash floods were also reported in Magpet and President Roxas towns of Cotabato province, according to reports.