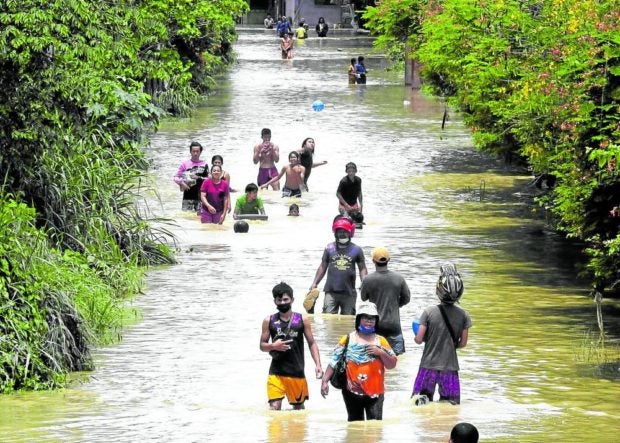 BETTER DAY | Residents at Jade Valley Subdivision in Barangay Tigatto, Davao City, go out of their houses as floodwater from overflowing rivers and creeks starts to recede on Tuesday after days of heavy rain. (BING GONZALES)

DAVAO CITY, Davao del Sur, Philippines — Long wails of sirens echoed through downtown streets here at 8 p.m. on Monday, warning those living near the banks of the Davao River to evacuate because of the rising water.

Continuous heavy rains in the city’s upland areas caused waterways and creeks to swell, displacing 2,600 families in 14 villages along the banks of Davao River at the height of the flooding that lasted through early morning on Tuesday, said Alfredo Baloran, head of the City Disaster Risk Reduction and Management Office (CDRRMO).

The rains were spawned by the low pressure area monitored by the Philippine Atmospheric, Geophysical and Astronomical Services Administration (Pagasa) east of Davao City on Monday.

A large number of affected residents live in low-lying areas prone to floods, among these Barangay 5-A, which covered the Bankerohan area; Barangay Sto. Niño, where a creek overflowed; Jade Valley and Juliville subdivisions in Tigatto area; Barangay Talomo, Maa, Matina Crossing and El Rio in Barangay 19-B.In some parts of Juliville Subdivision, water went as high as a meter, said Inquirer editorial assistant Joselle Badilla who lived nearby. She said that unlike the 2017 flooding that almost wiped out most of her family’s belongings, floodwater on Monday night did not reach their house.

Baloran said several families refused to leave their homes even after they were informed that the volume of river water upstream was rising.

No one was reported hurt or injured, though, he said.

The CDRRMO had installed a system that allowed its team to monitor the rising water level in major tributaries upstream of the Davao River before this reached the populated villages downtown.

As early as 5:30 p.m., a video clip posted on Facebook by CDRRMO personnel Rodrigo Bustillo already showed the swirling, coffee-colored water of Suawan River, a major tributary of Davao River, allowing him to warn villages downstream to prepare for possible emergency evacuation.

Less than three hours later, sirens in low-lying barangays along Davao River were activated, prompting the people to evacuate.

Even then, there were no reports of people getting hurt or major infrastructure getting damaged, said Baloran. He said his office was still trying to collate reports from other areas.

Despite some initial resistance, he said he asked the help of the Davao City police office to conduct preemptive evacuation to ensure that everyone would be out of harm’s way.

“Our goal is no one should be rescued,” said Baloran. “Everyone should be out of danger when the rampaging water comes.”

He said other residents voluntarily left their homes upon hearing the early-warning siren as well as other announcements.

On Tuesday, water at Davao River had receded and most evacuees returned home. Bad weather in E. Visayas

Flooding was also reported in parts of Eastern Visayas on Monday, prompting local officials to suspended classes and work in some areas in Leyte, Biliran and Northern Samar provinces.

Pagasa had cautioned that scattered floods and landslides would likely happen due to the low pressure area affecting the region.

In Northern Samar, floods hit the towns of Lope de Vega, Catubig, San Roque, and the provincial capital of Catarman.

Flooding was also reported in Calbayog City, Samar, where a wooden bridge in Barangay Baja was damaged.

No evacuation was reported in these areas.