Duterte will ask ‘friend’ Putin to control troops in Ukraine

MANILA, Philippines — President Rodrigo Duterte vowed on Monday to appeal to his friend, Russian President Vladimir Putin, to control his soldiers who had been accused of committing rights violations and war crimes during their invasion of Ukraine.

Duterte made the statement during his weekly “Talk to the People” briefing as he was talking about rising oil prices due to the Russia-Ukraine war.

According to Duterte, it seems Putin is not intent on ending hostilities, but he said that in the name of humanity — so that innocent people would not be killed — he would ask his Russian counterpart to restrain his soldiers when dealing with Ukrainian civilians.

“It seems like Putin does not want the war to end, but I pity the people,” Duterte said. “I am Putin’s friend, but the way they are handling the war, every day even civilians are being bombed. You know, I would ask Putin to hear me, because President Putin, we are friends: ‘You are in control of everything. Anyway, you really started the ruckus there. So be strict with your soldiers.’”

“They’re out of control, killing. Well, [if they’re fighting] soldiers, no problem. That’s why it has an army — for fighting, to fight in case there is a war which is really the reality now,” he added.

But he said Ukrainian civilians must not be harmed.

“You have to control them so that it would really be you who will be followed. First of all,  protect the innocent, the civilians who have nothing at all to do with that war,” Duterte said. 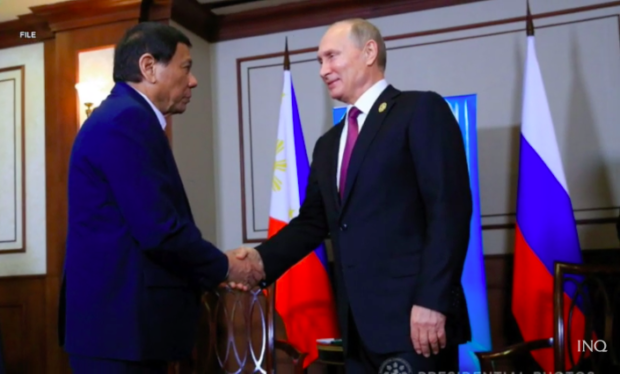 Waging war against a sovereign nation

Duterte also did not accept Putin’s label on what his troops had been doing in Ukraine.

He clarified though that he does not want a quarrel with Putin, saying that he is just concerned about the effects of the war and the number of civilians killed.

“It’s not a special military operation. Putin used those words. But actually, it is really waging a war against a nation, a sovereign nation,” he said. “Even us, we get hurt seeing civilians [CUSSES]… even the children, you did not [spare].  You know, you have been aiming your cannon at residential areas,” Duterte said.

“So if the Russian embassy is listening: I am not picking a quarrel against anybody, I said Putin is a friend of mine. But you know, if you get into a war it is your moral obligation to see to it that the civilians, the innocent ones — children, the elderly, the women — they’s are so vulnerable,” he added.

Russia entered Ukraine’s eastern borders on Feb. 24 to help two secessionist republics over the east. Several countries, including the United States, have condemned Russia’s actions, but hostilities have not completely stopped three months since starting.

Several supposed war crimes — including mutilation of civilians,  the rape of women, and the killing of children and the elderly — have prompted Ukraine President Volodymyr Zelensky to ask the United Nations and the west for help and accountability.