Duterte on sharing ‘killer’ tag with Putin: ‘But I only kill criminals’ | Inquirer News

Duterte on sharing ‘killer’ tag with Putin: ‘But I only kill criminals’

MANILA, Philippines — President Rodrigo Duterte has admitted again to accusations that he is a “killer” — a tag also used on Russian President Vladimir Putin.  But Duterte said he only killed criminals.

Duterte gave that reaction in his weekly taped “Talk to the People” briefing on Monday.

He noted that he had already admitted to killing criminals while campaigning for the presidency in 2016.

Duterte clarified, however, that he and Putin move in different worlds, as his Russian counterpart was accused of committing war crimes in his troops’ invasion of Ukraine.

“I am just hurt seeing innocent people being killed. Many are saying that Putin and  I are the same. We are killers.  You know, I want all you Filipinos to know that I really kill. I told you that even before,” he said, speaking in a mix of English and Filipino.

“But I am only killing criminals. I do not kill children, the elderly. Putin and I have different worlds — [his world is] what is happening in Russia,” he added. 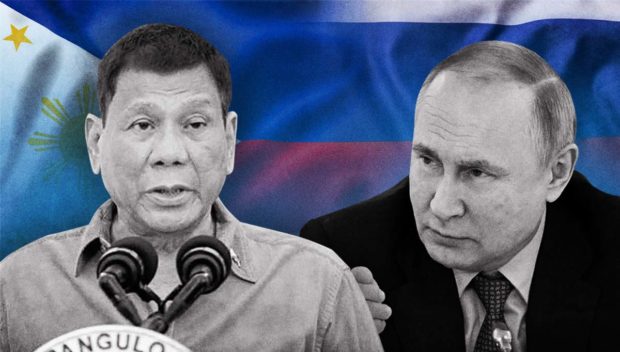 According to Duterte, former military officers in his Cabinet — referring to Defense Secretary Delfin Lorenzana and Interior Secretary Eduardo Año — share his belief that the war in Ukraine is inhumane.

“I know that if you let them talk they will say that they don’t like it either [what’s happening in Ukraine],” Duterte said.

“I am not condemning President Putin. I am just sharing my sentiments which is also the sentiment of every human being inside this room — that it’s not the way how to fight a war,” he added.

Before making these statements, Duterte talked about how the Ukraine-Russia conflict had driven oil prices up and kept the global economy unstable, noting that a new normal discussion should only start once hostilities had stopped.

He noted that Putin seemed to have no plan to end the war yet. But he said he would try to tell his “friend” to be strict with his troop so that they would not commit war crimes.

“If the Russian Embassy is listening, they can tell Putin that his friend is saying things, an outgoing president that has another request in the name of humanity.   do not have any stake there except that it is not our practice. It’s not the mode that we wage a war — which is what’s happening,” he said.

This is not the first time Duterte compared himself to Putin.

During his May 4 briefing, he joked that he and Putin might share a jail cell in the future. He noted that was accused of rights violations before the International Criminal Court in connection with the drug war killings. On the other hand, Putin was accused of committing war crimes in his invasion of Ukraine.

“Now, they say I have a case at the International Court of Justice. I will be jailed. Human rights [violations]. Putin is bombing the [DISCONTINUED]. Me? What’s my sin? I’m killing criminals,” Duterte said in Filipino.

“Putin? Women, men, children — flattened. He’s also accused of human rights [violations]. So, we might share the same cell when the time comes,” he added.

Russia entered Ukraine’s eastern borders on Feb. 24 to help two secessionist republics over the east. Several countries, including the United States, condemned the action. Meanwhile, hostilities have not completely stopped three months since they started.

Supposed war crimes — including mutilation of civilians, rape of women, and killing of children and the elderly — have prompted Ukraine President Volodymyr Zelensky to ask the United Nations and the West for help and accountability.

Putin and I may share a jail cell, Duterte jests