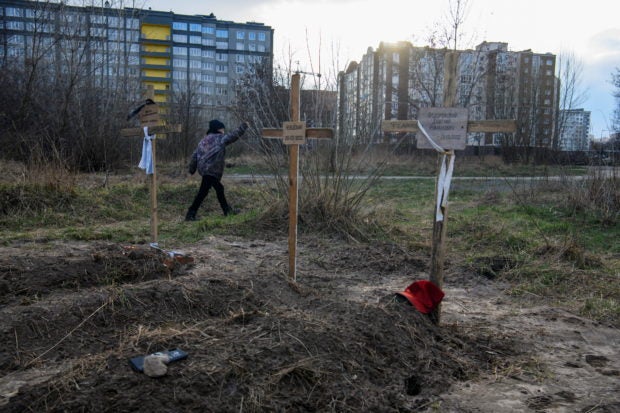 A boy walks past graves with bodies of civilians, who according to local residents were killed by Russian soldiers, as Russia’s attack on Ukraine continues, in Bucha, in Kyiv region, Ukraine April 4, 2022. The inscription on the cross in the middle reads: “Unknown”. REUTERS/Vladyslav Musiienko

UNITED NATIONS — Ukrainian President Volodomyr Zelenskiy told the United Nations Security Council on Tuesday that Russia must be held accountable for what he and many Western leaders have called war crimes, as the United States and its allies prepared to expand sanctions.

The West’s punishment of Moscow over its actions in Ukraine has been given new impetus this week following the discovery of civilians shot dead at close range in the Ukrainian town of Bucha seized from Russian forces.

Between 150 and 300 bodies might be in a mass grave by a church in Bucha, north of the capital Kyiv, Ukrainian human rights ombudswoman Lyudmyla Denisova said on Tuesday.

In a live video address from Kyiv, Zelenskiy questioned the value of the 15-member Security Council, which has been unable to take any action over Russia’s Feb. 24 invasion because permanent member Moscow is a veto power.

“We are dealing with a state that turns its veto at the U.N. Security Council into the right to (cause) death,” Zelenskiy said. “Russia wants to turn Ukraine into silent slaves.”

The Kremlin said allegations that Russian forces had executed civilians in Bucha were a “monstrous forgery” staged by the West to discredit it.

Russia says it launched a “special military operation” in Ukraine to demilitarize and “denazify” a country that President Vladimir Putin regards as an illegitimate state.

The Kremlin’s position is rejected by Ukraine, a parliamentary democracy, and the West as a pretext for an unprovoked invasion that has uprooted a quarter of the country’s population.

The ambassador for Russia’s strategic partner China told the Security Council the reports and images showing civilian deaths in Bucha were “very disturbing” but said the circumstances should be verified and any accusations should be based on facts.

Ambassador Zhang Jun urged the United States, NATO and the EU to pursue dialogue with Russia rather than further sanctions he said were not effective in solving the crisis.

The tense Security Council meeting came amid heavy fighting in Ukraine’s south and east as Russia shifts its offensive away from Kyiv after failing to capture any major cities.

In the besieged southern port of Mariupol, where tens of thousands are trapped with scant access to food or water, a Dominica-flagged cargo ship sank on Tuesday after being targeted by Russian missile strikes, the vessel’s flag registry said.

One of the 12 crew members required medical treatment while the others were evacuated onto nearby vessels, the registry said. The ship was believed to have been without cargo.

Russia did not respond to a request for comment. Its armed forces said on Tuesday they had shot down two Ukrainian military transport helicopters that were trying to leave the city. Ukraine’s armed forces general staff said attacks in Mariupol were continuing, but did not give any details.

In the east, where Ukraine’s second-largest city of Kharkiv has been among Russia’s main targets, the general staff said Ukrainian forces had destroyed three Russian tanks and around 20 other armored vehicles.

Reuters has seen at least four victims shot through the head in Bucha, one with their hands tied behind their back. Residents have recounted cases of several others slain, some shot through their eyes and one apparently beaten to death and mutilated.

On Tuesday, Ukrainian Serhii Lahovskyi buried the corpse of a childhood friend who had been shot through the mouth at very close range after disappearing when Russian troops occupied the town.

Lahovskyi and others grabbed shovels and dug a shallow grave on a grass verge. They used a carpet to carry the remains, placing him in a ditch before covering him with wooden boards and shovelling earth on top.

“Why did these animals shoot him so?” Lahovskyi said, sobbing. “This is not Russia, this is a monster.”

Reuters could not independently verify the details of Lahovskyi’s account or who was responsible for the killings in Bucha.

U.S. officials said new economic restrictions on Russia following Bucha would be taken in “lockstep” with other Group of Seven advanced economies and the EU.

Proposed EU sanctions, which the bloc’s 27 member states must approve, would bar Russian imports worth 9 billion euros ($9.8 billion) and exports to Russia worth 10 billion euros, including semiconductors and computers, and stop Russian ships entering EU ports.

Europe, which obtains about a third of its natural gas from Russia, has been wary of the economic impact a total ban on Russian energy – which Ukraine maintains is vital to securing a peace deal – would bring.

A proposed EU ban on Russian coal would be worth around 4 billion euros a year, von der Leyen said – tiny in comparison with last year’s 100 billion euros in oil and gas imports from Russia.

But signaling strengthening EU resolve, German Foreign Minister Annalena Baerbock said the coal ban was the first step towards an embargo on all fossil fuel imports from Russia.