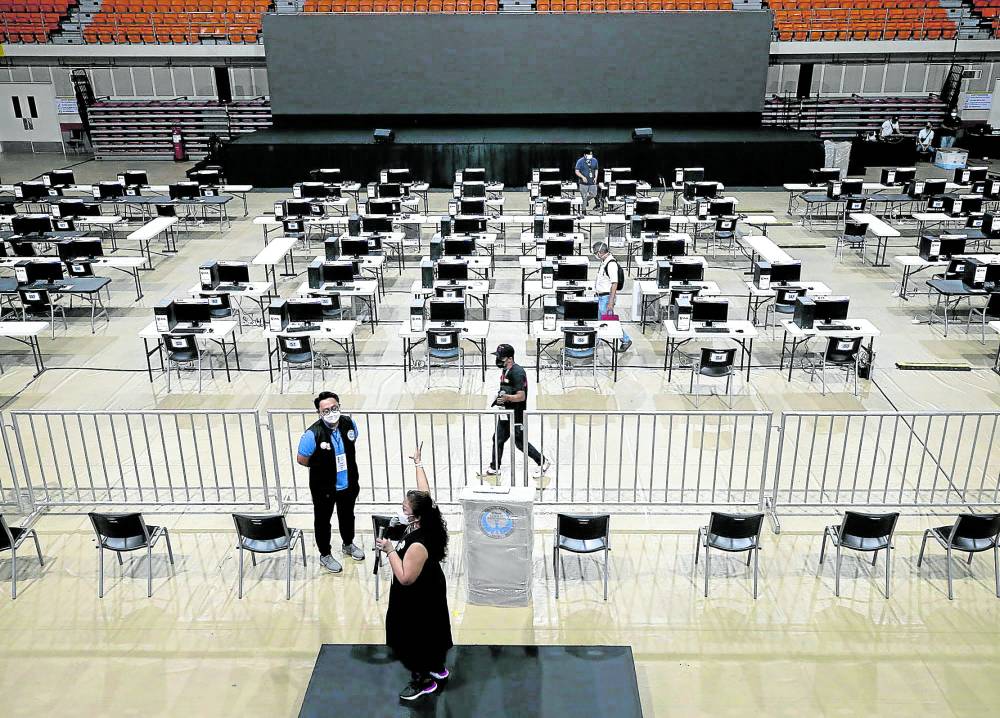 The Parish Pastoral Council for Responsible Voting (PPCRV) vote count setup at the Quadricentennial Pavilion of University of Santo Tomas in Manila. FILE PHOTO/RICHARD A. REYES

A now-deleted post showed a conversation between two unidentified persons, talking about an alleged bomb threat and tear gas attack inside the command center.

One of the persons in the conversation claimed that staff from the Commission on Elections (Comelec) barred PPCRV volunteers from leaving the facility for fear of a leak of a supposed discrepancy in the unofficial count of election returns (ERs) in the presidential race.

Here are screenshots of the now deleted online conversation:

“There are circulating posts [about] a turmoil in PPCRV. That’s fake news,” Sia said in a Facebook post on Wednesday (May 11).

“It was peaceful there. We also had fun since there were games… The checking or encoding of votes was also not halted,” she said.

“Let’s not get swayed by those posts. Let’s not share [those, and] verify first. It might cause panic, and we don’t want that to happen. If you see someone sharing posts like that, kindly inform them,” Sia added.

She also uploaded videos to disprove the claims made by the posts.

Sia told INQUIRER.net that she will return to the command center on Thursday (May 12) to volunteer again.

Citing  PPCRV chair Myla Villanueva, Sia also clarified that there were no discrepancies found in PPCRV’s validation of electoral returns from the Vote Counting Machines (VCMs).

“Currently there are no discrepancies but the sample is small and we’d like to report the match rates as it becomes more representative,” Villanueva said on Tuesday.

Dela Cruz, in an interview on ABS-CBN News Channel’s Rundown on Tuesday, said that the PPCRV is not seeing anything that should be of concern amid the validation of votes.

“Based on the data that we are seeing, we are not seeing anything that should be of any concern,” he added.

“Just to emphasize, we at PPCRV will be the first one to let you know if there is anything that should be of concern to us and our data is open to anyone, political parties, representatives of any candidates, we are willing to share our data,” he said.

READ: PPCRV not seeing ‘anything of concern’ amid vote validation

No irregularities in alleged ’68:32 magic’ — PPCRV