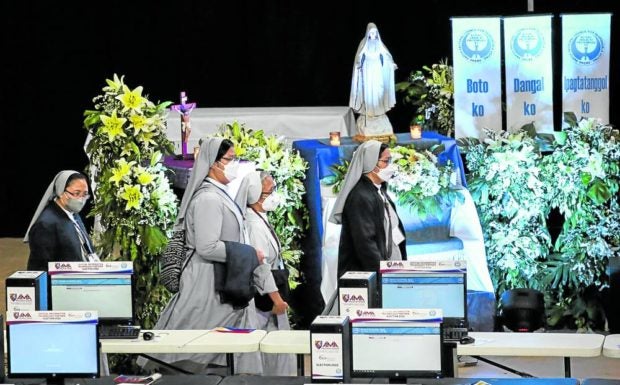 WATCHDOG | The Parish Pastoral Council for Responsible Voting (PPCRV), whose volunteers include the religious community, says it has not encountered discrepancies in the vote tabulation being conducted at its command center on the University of Santo Tomas campus in Manila. —LYN RILLON

MANILA, Philippines — There are no discrepancies in the unofficial count of election returns (ERs) in the presidential race, according to poll watchdog Parish Pastoral Council for Responsible Voting (PPCRV), which tapped academic experts from various universities to look into their tabulations following questions about the results of the vote.

The matching of the ERs will start on Thursday since the poll watchdog waited to receive more returns from provinces in the Visayas.

People commenting on social media, some of them statisticians and data analysts, had questioned the consistent percentage gap between the votes for the son and namesake of the late ousted dictator and the Vice President from the transparency server of the Commission on Elections (Comelec).

Various social media posts noted that Marcos was leading by a consistent wide margin of 47 percent against Robredo as PPCRV counted the votes that came in during the first few hours after precincts closed at 7 p.m. on Monday.

Singapore-based data consultant Wilson Chua agreed that the trend was unusual, saying that it was “almost perfect” and “programmatically done.”

Chua, an alumnus of the School of Business of the University of the Philippines (UP), said several of his own analyses of the election results were “spot on,” except for the presidential race. He said that among his reviews of online trends, actor Robin Padilla was projected to top the Senate race.

“People’s online sentiments and actions told us they preferred Leni, but they voted otherwise. So, conversion from online positive sentiment to votes is the link we are looking at,” Chua told the Inquirer on Tuesday.

According to another UP political scientist, Alicor Panao, the election results were expected and the reported irregularities were “speculative and unfounded.”

“I would be surprised if Robredo suddenly wins because the surveys indicated that she was losing. But the Comelec has only validated the results of the surveys so what was surprising about that?” he said.

Chua said that while the election data trend may be uncommon, he had yet to detect any signs of fraudulent data using Benford’s Law, a mathematical method used by accountants and statisticians to identify fraud when there is abnormal distribution in numbers probability.

According to the statistical analysis by experts from Ateneo de Manila University’s mathematics department, “the [consistency] of computed ratio being similar to each other across different transmission arrivals is not unexpected.”

Panao said it was understandable that many Filipinos worry about the future of the country under another Marcos presidency, but the objective question of who won had been answered “and there is a winner already.”

“The people have spoken, what can we do? Are we to impose our values on people?” he said.

UP political science professor Maria Ela Atienza said that “normally, people will accept the results of the election,” if there was no widespread breakdown of the vote-counting machines (VCMs).

Atienza cited Kontra Daya’s report that the number of faulty VCMs doubled from 801 cases during the 2016 presidential elections to at least 1,801 cases this year.

“It’s a very worrying situation since the Comelec, in the past few months, has not earned the trust and confidence of a lot of people because of many controversies surrounding the commissioners, how they respond to the disqualification cases of Marcos Jr., and how they publicly argue,” she said in a phone interview.

Many voters did not want to leave their ballots with the electoral board when the VCMs in their precincts malfunctioned and waited even way past midnight for the machines to be fixed so that they themselves could insert the ballots into the VCMs.

“It shows a lack of trust in the body that is supposed to secure our votes and make sure that there is fair, clean, and orderly election. It shows a lot of distrust in the electoral process,” she said.