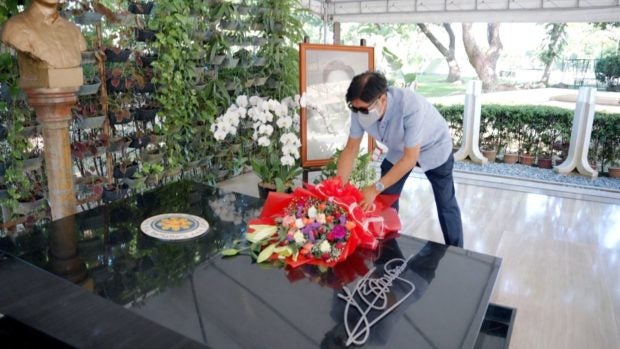 Presumptive Pres. Ferdinand “Bongbong” Marcos lays a wreath on the tomb of his father at the Libingan ng mga Bayani. Image from Facebook / Bongbong Marcos

MANILA, Philippines — As his lead continues to widen, presumptive president Ferdinand “Bongbong” Marcos Jr.on Wednesday visited the tomb of his late father and namesake at the Libingan ng mga Bayani in Taguig City.

Marcos Sr. was buried at the Libingan ng mga Bayani in 2016 amid the protests of victims and kin of human rights violations during martial law.

In one of the photos posted on his Facebook page on Wednesday, Marcos appeared to be in tears as he stood in front of his father’s tomb.

As of 11:02 a.m., May 11, Marcos Jr. was still leading the partial and unofficial count for president, with over 31 million votes. Vice President Leni Robredo was a far second with just over 14.8 million votes, followed by Senator Manny Pacquiao at 3.6 million.

It would be recalled that President Rodrigo Duterte, father of Marcos Jr.’s running mate Sara Duterte-Carpio, gave the burial the go-signal to be laid to rest at the military-run cemetery, saying the late dictator was  qualified as a former soldier and president.

However, critics protested the move, saying the former president should not be buried at the heroes’ cemetery, citing the abuses during his regime.

According to Amnesty International (AI), 107,200 people were killed, tortured, and imprisoned during the martial law years.