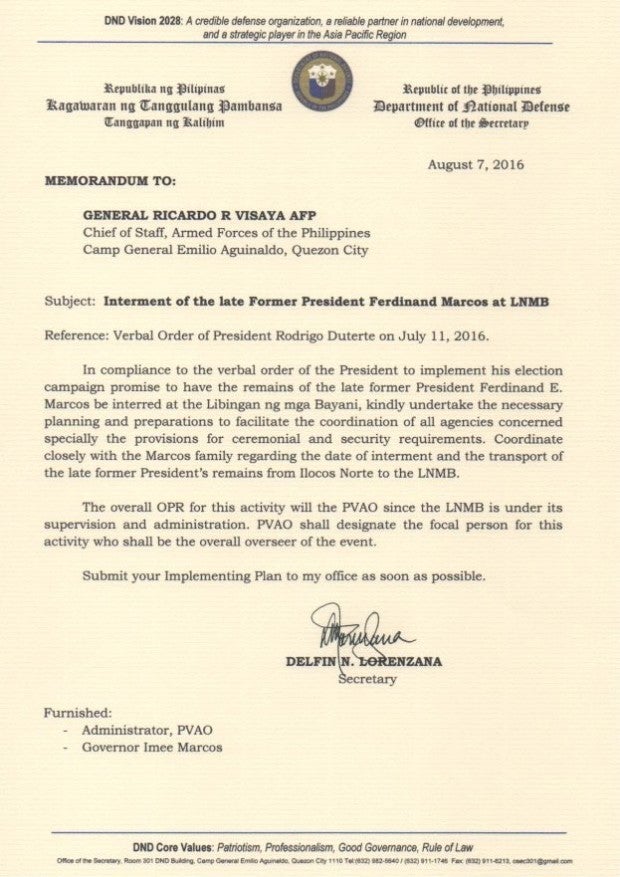 PRESIDENT Duterte gave the go-ahead Sunday for the burial of former dictator Ferdinand Marcos at a heroes’ cemetery, possibly next month, and said he would allow Marcos opponents to protest the politically divisive move.

Duterte said Marcos is qualified to be buried at the military-run cemetery as a former soldier and president. He also revealed that he once voted for Marcos and that his late father, a politician, served in Marcos’s Cabinet.

“Marcos was a president and, as a matter of fact, I voted for him,” Duterte said at a news conference. “He is qualified to be buried there. If other Filipinos don’t want that, fine.”

He said street protests would be allowed as long as traffic and motorists are not inconvenienced.

A newspaper has quoted Marcos’s son and namesake, former Sen. Ferdinand Marcos, as saying that the burial may take place on Sept. 18.

Duterte’s predecessor, Benigno Aquino III, left-wing activists and victims of human rights abuses have cited massive corruption and rights violations under Marcos as reasons for their opposition to the burial. Marcos was ousted in a 1986 “people power” revolt.

One left-wing activist, Bonifacio Ilagan, has said such an honorable burial for a president blamed for thousands of killings, tortures and military abductions, including some that remain unresolved, would be a profound insult to victims of rights abuses like him. Aside from street rallies, he said, the planned burial may spark other protests such as a move to urge families to relocate their dead from the heroes’ cemetery.

Duterte has argued that those buried at the cemetery were not all heroes, and said he would leave it up to the military whether to bestow full funeral honors.

While soldiers make up the bulk of the more than 40,000 people buried at the cemetery, military rules prohibit those who have been dishonorably discharged from service, as well as personnel convicted of an offense involving moral turpitude.

In 1995, a U.S. district court in Hawaii awarded more than $2 billion to nearly 10,000 victims of human rights abuses, including relatives of many who were killed and tortured who filed a class suit against the Marcos estate.

While the brash Duterte campaigned on a platform to fight corruption and crime, he has backed politicians who have been linked to large-scale graft, including Marcos and ex-President Gloria Macapagal Arroyo, who was freed last month from years of hospital detention after being cleared of a corruption charge but may face a new graft complaint.

Arroyo and the Marcoses have denied any wrongdoing while in office.