One for the books: Voting took nearly 24 hours in some precincts 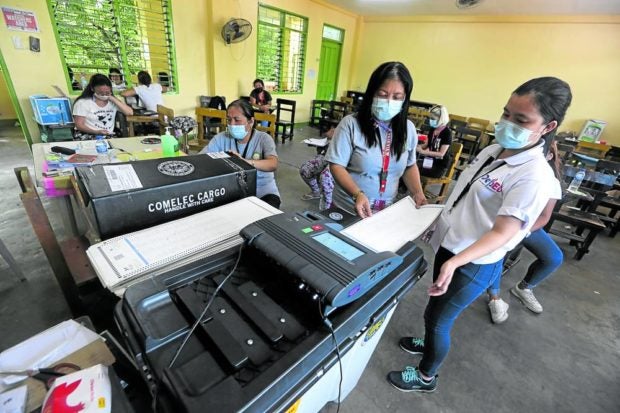 MANILA, Philippines — On May 9, Tanya Grace Jamon-Navarro waited 20 hours for a replacement SD (secure digital) card for her precinct at the Tandang Sora Elementary School in Quezon City so she could personally feed her ballot into the vote-counting machine (VCM).

An employee of a media company, Jamon-Navarro, 37, arrived at the precinct at 6 a.m. Monday and went home at 2:30 a.m. Tuesday because she wanted to complete the voting process herself.

On Monday night, she posted on Facebook: “When we complain or ask for updates, the electoral board in our precinct keeps on snubbing us, as if we are wrong in fighting for our rights. We will stay here until we can vote. Accomplish the ballot, feed it into the machine and get the receipt. We will be accountable for our vote so it won’t go to waste… I am fighting for the future of my children, so I am willing to wait as long as it takes.”

On Tuesday, she posted this: “2:30 am, it’s already May 10. Waited for 20 hours for the SD card of the VCM. There’s news about the initial results, but despite the weariness, fear and sadness, we stood for what we believed is right.”

Hers was not an isolated incident, with some 1,867 polling precincts reporting malfunctioning VCMs on Election Day.

The Commission on Elections (Comelec) later said the machines would no longer be used in the 2025 midterm polls.

At 28 minutes past midnight on Tuesday in Batasan Hills, Quezon City, cheers greeted a Comelec staff member who had arrived from Santa Rosa, Laguna, with the replacement SD card which was to finally activate the machine that had been sitting idle throughout Election Day.

By 12:33 a.m., the VCM was declared operational by one of the teachers overseeing the balloting in one of three voting clusters composed of three precincts each in Northview 1 in Quezon City.

Sonnie Bassig, a retired sales manager and civil engineer who arrived early along with others on May 9, happily got up to vote. He was determined to make his vote count for his presidential candidate, Leni Robredo.

“There is light at the end of the tunnel. Now you have a real choice. To me, she has a very clean record,” said Bassig, 69.

When the teachers, still sleepless, wrapped up their task around 8 a.m., 467 of 579 registered voters had cast their ballots.

Heading home at close to 2 a.m., Bassig said he couldn’t not vote after all these years. He expressed worry about how other countries would view Filipinos if the dictator’s son and namesake won the elections.

“They’ll call us stupid,” he said.

Watchdog groups expressed concern over the voters who had to wait until Tuesday for replacement VCMs and SD cards.

Lawyer Rona Ona Caritos, executive director of the Legal Network for Truthful Elections (Lente), said the long wait “should have been prevented by the Comelec’s timely implementation of its contingency procedures” that were promulgated early precisely “to answer for defective VCMs and SD cards.”

In a message to the Inquirer, Caritos said the Comelec should ensure effective implementation of its policies and procedures in holding automated polls. “Regarding fraud and cheating incidence, there is a need for [it] to be more aggressive in its policies,” she said, adding that it was within the poll body’s discretion to assess and decide on the usability of the VCMs that were acquired for the 2013 elections.

In a separate message, Kontra Daya convener Danilo Arao said irregularities and cases of fraud “put into question the integrity of the election results, and the election system for that matter.”

He said the fault lay not just on the Comelec’s “putative inefficiency,” but also on its partnership with Smartmatic, the automated elections systems provider, which, he pointed out, “should be blacklisted once and for all.”

Arao said the poll body should look into the mess, and “should also be investigated for compromising the people’s trust in the elections, especially first-time voters.”

He said the Comelec should have retired its VCMs “a long time ago,” or at least left its refurbishment to a “third party, not Smartmatic.”

For now, Lente is focusing on the Comelec’s random manual audit to check the accuracy of the machine count.

“Transmission should be synchronized across various servers, but it appears that one is ahead of others. Why is that?” he said, adding that Kontra Daya was keeping a close eye on election-related developments while raising public awareness on “various forms of fraud and irregularities” on Election Day.

At the House of Representatives, Deputy Speaker and Cagayan de Oro Rep. Rufus Rodriguez urged the chamber to investigate the reports of malfunctioning VCMs and SD cards in polling places nationwide.

In a statement, Rodriguez said the malfunctioning VCMs and SD cards had led to the disenfranchisement of voters.

“We owe it to our voters to investigate these reports and recommend remedial measures, either via legislation or administrative sanctions or penalties to be imposed by the Comelec on responsible personnel and/or … Smartmatic,” he said.

The Comelec on Tuesday said “no voter was disenfranchised” despite the malfunctioning VCMs and SD cards.

“Also, all of these lessons will be taken to heart by the commission, and we will be making sure that the 2025 elections will be much better than this,” he said.

Laudiangco said that despite appeals on Election Day to extend the voting hours, the poll body did not see the need to do so.

“We delivered on our commitment that for as long as the people are lined up at 7 p.m., they will be allowed to vote no matter how many hours it would take,” he said.

Earlier, the Comelec reported fast replacement of defective VCMs and SD cards. Commissioner Marlon Casquejo also said the replacements did not affect the integrity of the elections.

VCM glitches bug polls; Comelec finally not reusing them in 2025