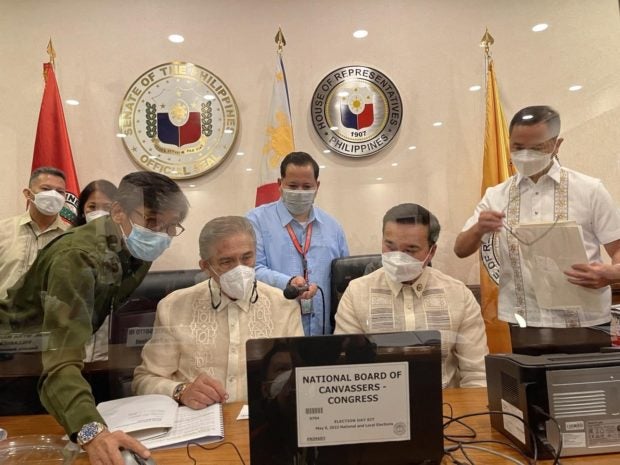 Senate President Vicente Sotto III and House Speaker Lord Allan Velasco during a press briefing on Monday, May 9, 2022. Photo from the Office of the Speaker of the House of Representatives

MANILA, Philippines — Congress may already be able to proclaim a new president and vice president before June, with the chamber’s leaders saying that the canvassing of votes “won’t even reach five days.”

In an interview with reporters on Monday, Senate President Vicente Sotto III said the Senate and the House of Representatives plan to begin canvassing on May 24 and proclaim the country’s two new leaders by May 27 at the earliest.

Congress is tasked to canvass the presidential and vice-presidential votes. It will resume the session on May 23.

“Kasi yung 23, magre-resume muna kami and we will probably have to do business during that day. Kasi, as a matter of fact, that’s the only time that we will be able to officially name the seven representatives from the Senate so and then there are other important businesses na for third reading ang Senate baka ihahabol namin on that day, the whole day. That’s at 10 a.m.,” Sotto said.

Sotto added he and House Speaker Lord Allan Velasco agreed to convene Congress as the National Board of Canvassers (NBOC) on the morning of May 24.

Sotto is running for vice president, but earlier said his role in canvassing votes is merely “ministerial.”

Meanwhile, Velasco cited the automated nature of this year’s elections as it would make canvassing faster.

“I think it won’t take that long kasi if you look at yung mga past canvassing natin it was done manually. This time, it’s going to be computerized so you won’t see anymore white boards, manual tallies,” Velasco said.

“Just a click of the computer and we’ll have LED screens to be flashed there and added automatically or tallied automatic,” he added.

Asked if Congress can proclaim the country’s next two highest officials before June, Sotto said: “For sure.”

“On the 28th at the latest, no?” he said, turning to Velasco, who agreed with Sotto.

“Basta walang question, question masyado. Anyway computerized ito, automated so we do not foresee any problem,” Sotto, for his part, said.