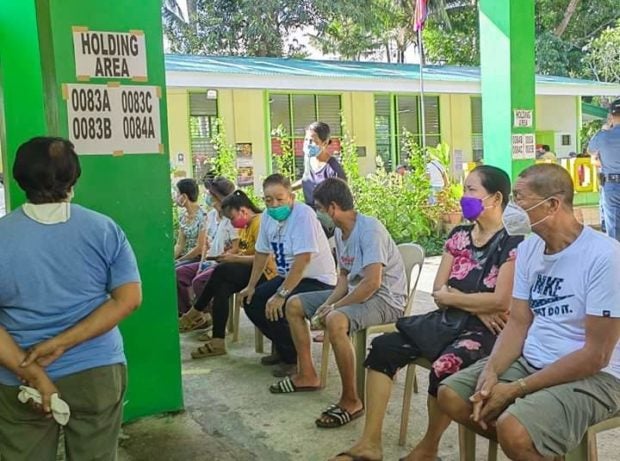 Senior citizens were among the first to line up to cast their vote at Suqui Elementary School in Calapan City on Monday, May 9, 2022. Photo by Madonna Virola, Inquirer Southern Luzon

MANILA, Philippines —The military and the police considered Monday’s holding of national and local elections as “good” and “generally peaceful” despite reports of poll-related violence and incidents that resulted in casualties.

Data from the Armed Forces of the Philippines (AFP) showed 15 election-related violent incidents such as shootings, explosions, and grenade throwing, among others, since May 8, eve of the polls.

“All of these 15 [violent incidents], we were able to respond. Sadly may namatay (there were casualties)… Overall, the security situation is good in terms of our people being able to vote and that there is a continuity of the electoral process,” Zagala said in a press briefing.

“Although 15 election violent incidents, it’s still a low, good number and we hope that it continues to be low until the end,” he added.

The Philippine National Police (PNP), for its part, said it has validated 16 election-related incidents. Zagala would later clarify that it is not yet clear if the AFP and the PNP have different incidents on record since the military is only recording “violent” incidents.

“We could say these are only isolated cases [that] happened particularly in the provinces of Lanao del Sur and in Maguindanao. There are places where there are shooting incidents [that] happened and harassments and some here in Luzon,” Police Gen. Allan Nobleza said in the same press briefing.

“If we are going to compare this to the previous elections, this number is still a little bit lower… The PNP could say that the election that is happening now is generally peaceful,” he added.

On Monday morning, three members of a barangay peacekeeping action team (BPAT) in the town of Buluan in Maguindanao were killed following a shooting incident near a polling precinct.

In Lanao del Sur, three people were killed and two others were injured when supporters of local candidates traded shots inside a voting center in Malabang town.

The Commission on Elections (Comelec) likewise said it believes that the conduct of the polls was relatively peaceful.

“As confirmed by our security partners, nung (in) 2019 ang (the) number of violent incidents was 60. Ngayon ang na-ireport lang (Now the report is) is 15 incidents so I would still consider these elections as relatively peaceful compared to the elections in 2019,” Comelec Chairman Saidamen Pangarungan said.