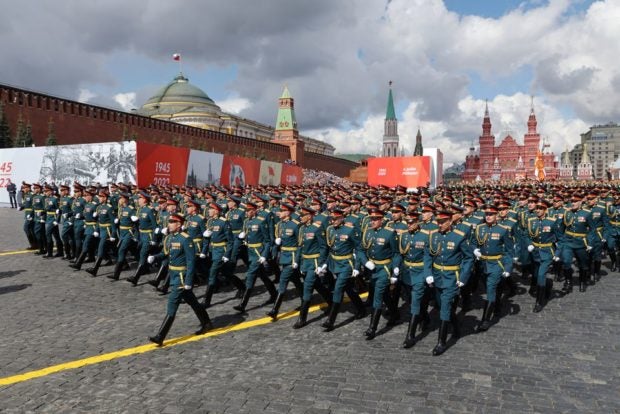 Russian service members march during a parade on Victory Day, which marks the 77th anniversary of the victory over Nazi Germany in World War Two, in Red Square in central Moscow, Russia May 9, 2022. REUTERS

LONDON — Russian President Vladimir Putin evoked the memory of Soviet heroism in World War Two on Monday to urge his army towards victory in Ukraine but acknowledged the cost in Russian lives as he pledged to help the families of fallen soldiers.

Addressing massed ranks of service personnel on Red Square on the 77th anniversary of victory over Nazi Germany, Putin condemned what he called external threats to weaken and split Russia, and repeated familiar arguments that he had used to justify Russia’s invasion – that Nato was creating threats right next to its borders.

He directly addressed soldiers fighting in the Donbas region of eastern Ukraine, which Russia has pledged to “liberate” from Kyiv’s control.

“You are fighting for the Motherland, for its future, so that no one forgets the lessons of World War Two. So that there is no place in the world for executioners, punishers and Nazis,” he said. 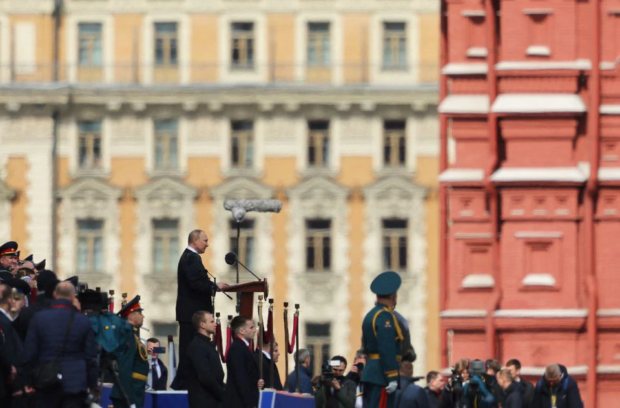 Russian President Vladimir Putin delivers a speech during a military parade on Victory Day, which marks the 77th anniversary of the victory over Nazi Germany in World War Two, in Red Square in central Moscow, Russia May 9, 2022. REUTERS/Evgenia Novozhenina

His speech included a minute of silence. “The death of each one of our soldiers and officers is our shared grief and an irreparable loss for their friends and relatives,” said Putin, promising that the state would look after their children and families.

But his 11-minute speech, on day 75 of the invasion, was largely notable for what he did not say.

He did not mention Ukraine by name, gave no assessment of progress in the war and offered no indication of how long it might continue. There was no mention of the bloody battle for Mariupol, where Ukrainian defenders holed up in the ruins of the Azovstal steel works are still defying Russia’s assault.

Putin has repeatedly likened the war – which he casts as a battle against dangerous “Nazi”-inspired nationalists in Ukraine – to the challenge the Soviet Union faced when Adolf Hitler invaded in 1941.

Ukraine’s President Volodymyr Zelensky has said it is Russia that is staging a “bloody re-enactment of Nazism” in Ukraine.