US charge d’affaires returns to Kyiv for visit | Inquirer News 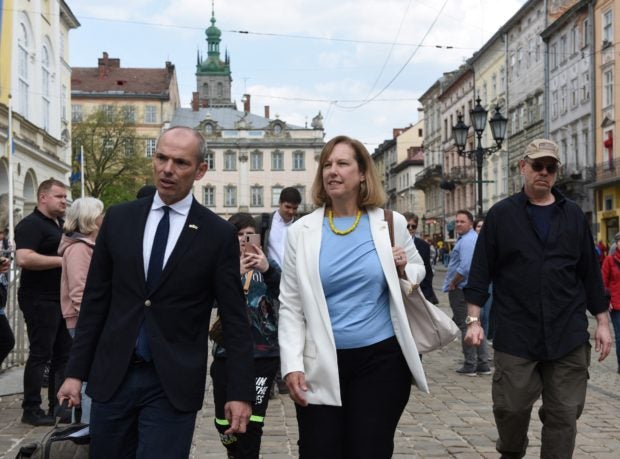 US Embassy charge d’affaires Kristina Kvien (C) walks in the western Ukrainian city of Lviv, where she held a press conference, on May 2, 2022, amid Russia’s military invasion launched on Ukraine. AFP

WASHINGTON—US charge d’affaires for Ukraine Kristina Kvien and her team returned to Kyiv Sunday, the embassy tweeted, in a step toward re-establishing Washington’s diplomatic presence there after it was closed days before the Russian invasion.

“Just arrived in Kyiv! Delighted to be back on Victory in Europe Day. Slava Ukraini!” tweeted the US embassy in Kyiv’s official account.

Kvien and her fellow diplomats went to Kyiv to commemorate the day marking the end of World War II on the continent, a senior State Department official, who spoke on condition of anonymity, said.

Earlier this week Kvien said the US hopes to return its diplomats to the Ukrainian capital “by the end of the month.”

US Secretary of State Antony Blinken has also championed a return, telling Ukraine’s President Volodymyr Zelensky during a visit last month that it will happen “promptly,” the official said.

Blinken on Sunday informed his Ukrainian counterpart, Dmytro Kuleba, about the Kyiv visit by Kvien and her team. Blinken said they would “conduct diplomatic engagement in advance of the planned resumption of Embassy Kyiv operations,” according to a State Department read-out.

The US closed its embassy in Kyiv on February 14 — 10 days before Russian President Vladimir Putin launched his invasion of Ukraine — and moved its diplomats westward.

Kvien and others have returned since on day trips, including to the western city of Lviv.

Western countries are gradually moving to reinstate a diplomatic presence in Kyiv, where Ukrainian forces have rebuffed a Russian offensive.

Blinken told Kuleba that the team’s return is “a testament to Ukraine’s success, Moscow’s failure, and our effective and enduring partnership with the government and people of a sovereign, democratic, and free Ukraine,” the State Department official said.