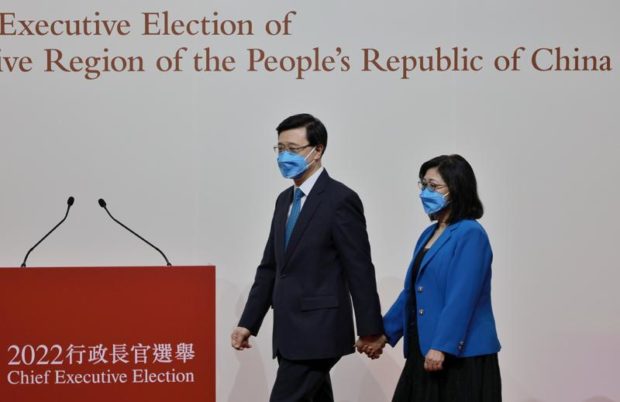 John Lee Ka-chiu arrives for a press conference with his wife at the Hong Kong Convention and Exhibition Centre in Wan Chai after winning the 2022 Chief Executive Election, May 8, 2022. China Daily/Asia News Network

The former chief secretary secured historic 1,416 votes from Election Committee members, far surpassing the threshold of 750 votes to win the election. A total of 1,428 members cast their ballots in the poll.

Lee said he will firmly safeguard the nation’s core interests and the rule of law, and protect the city from internal and external threats to ensure its long-term stability.

He will also prioritize tackling the most pressing issues, such as housing, healthcare and youth development, to build a caring, inclusive society, and to enhance upward mobility for the younger generation.

He also vowed to proactively integrate the city into the national development and participate in the nation’s 14th Five-Year Plan (2021-25). Besides further shoring up existing advantages in professional services, the city will also explore emerging opportunities in inno-tech and the culture sector, Lee said.

To attract more overseas professionals, the city will also expand its international connectivity, Lee said. Despite the inconvenience caused by the COVID-19 pandemic, the government will do its utmost to resume normal travel with the Chinese mainland and overseas regions.

Lee stressed that his most urgent task is selecting proper candidates to form the new government. He said he will invite capable and experienced patriots who have the passion and commitment to join his governing team.

Although he will assume office in only two months, he is confident that the city has many professionals who aspire to serve Hong Kong under the principle of “patriots administrating Hong Kong”.

He said his administration will also work in concert with the Legislative Council to raise the city’s governance capability.

“My government will be determined to confront the well-entrenched issues that have faced Hong Kong for many years, take decisive steps, and adopt efficient and effective actions to resolve them.

“I look forward to all of us starting a new chapter together, building a Hong Kong that is caring, open, and vibrant, which is also full of hope, opportunities, and harmony,” Lee said. 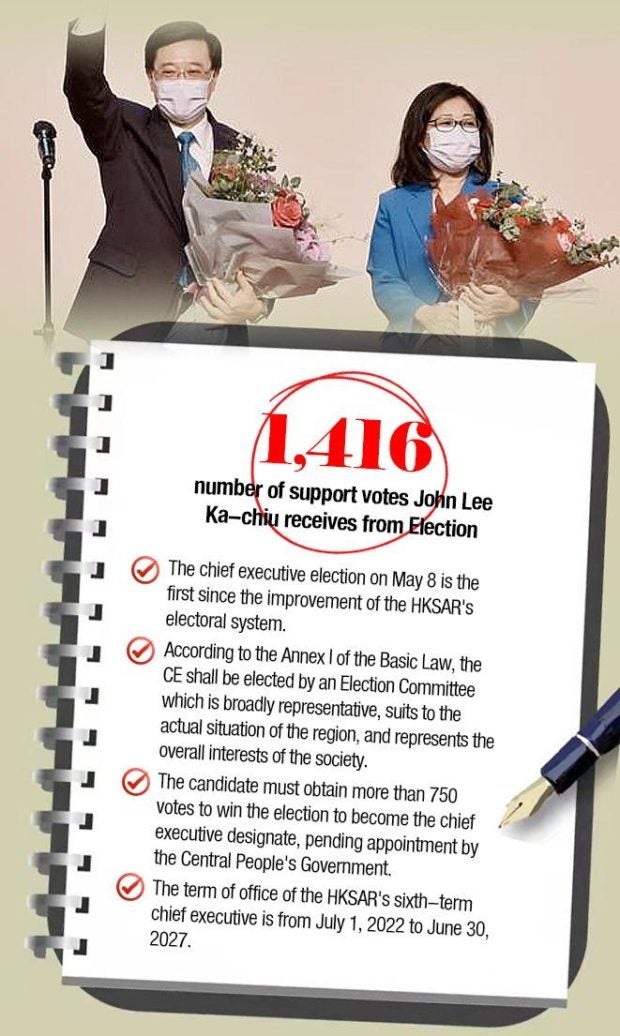 “Hong Kong has accumulated many advantages since its return to the motherland, but internal friction and external intervention brought chaos and hampered its development. I know that there will be a lot of difficulties, but I still want to serve the city, as everything I have was given by the city.”

During his ascension from “a nobody” to his current position, Lee said he got the rare opportunity to serve the city’s communities. He expressed gratitude to the people who have supported him, and he has full confidence that he and his experienced team will lead the city toward a brighter future.

Noting the election campaign an “incredibly rewarding, inspiring and memorable experience”, Lee thanked all the Election Committee members, his election advisers, and the representatives from different sectors who shared their views and insights with him in the past month.

Will Hong Kong reopen for business under new leader Lee?