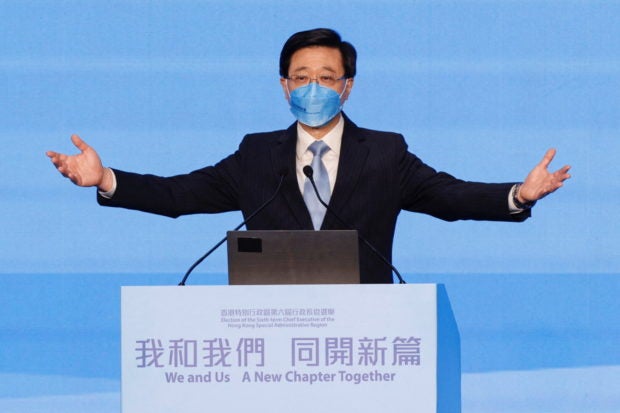 HONG KONG  – Hong Kong’s leader-in-waiting, John Lee, is expected to be endorsed for the city’s top job on Sunday by a committee stacked with pro-Beijing loyalists, as the financial hub attempts to relaunch itself after several years of political upheaval.

Some 1,500 members of a pro-Beijing election committee will cast their votes for Lee, the sole candidate, on Sunday morning at a harbourfront convention centre, with a simple majority required to anoint him as Hong Kong’s next leader.

Few of the city’s 7.4 million people have any say in choosing their leader, despite China’s promises to one day grant full democracy to the former British colony, which returned to Chinese rule in 1997.

Lee, a former Hong Kong secretary for security, has forcefully implemented China’s harsher regime under a national security law that has been used to arrest scores of democrats, disband civil society groups and shutter liberal media outlets, such as Apple Daily and Stand News.

He has pledged to relaunch Hong Kong as an international city and bolster its competitiveness, amid concerns among some Western governments, including the United States, that freedoms and the rule of law have been undermined by the security legislation that was imposed by Beijing in 2020.

Chinese authorities say the law is necessary to restore stability after protracted pro-democracy protests in 2019.

Some critics say Lee’s attempts to relaunch Hong Kong internationally could be affected by sanctions imposed on him by the United States in 2020 over what Washington said was his role in “being involved in coercing, arresting, detaining, or imprisoning individuals” under the security law.

Lee, who says enacting more national security laws for Hong Kong will be a “priority” for him after taking office, has often said Hong Kong is a law-abiding society and that everyone must act in accordance with the law.

Among his other priorities as Hong Kong’s leader, Lee has said he will restructure the government to bolster policy-making and try to boost housing supply in one of the world’s most expensive housing markets.