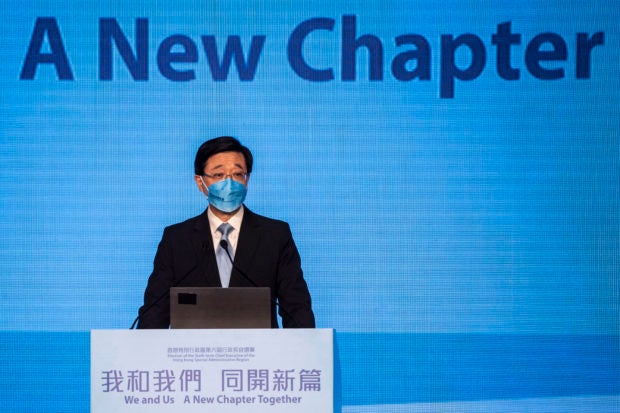 Hong Kong former chief secretary John Lee speaks at an event in Hong Kong on May 6, 2022, ahead of the Hong Kong Chief Executive election on May 8. AFP

HONG KONG — As a former beat cop who rose to become Hong Kong’s security chief, John Lee is the one person China’s leaders trust to run the city as their loyal lieutenant, analysts and insiders say.

Lee, 64, is expected to be anointed Hong Kong’s next chief executive by a small committee on Sunday, the culmination of a choreographed, Beijing-blessed race with no other candidates.

His elevation caps a remarkable rise for a man whose police career lifted him from a working-class family to the upper echelons of Hong Kong’s political establishment.

It also places a security official in the city’s top job for the first time, a man who played a key role in the suppression of huge democracy protests and Beijing’s subsequent political crackdown.

Insiders say Lee’s unwavering commitment to that role won China’s confidence at a time when other Hong Kong elite were seen as insufficiently loyal or competent.

“John Lee is the one that the central government knows the best, because he was in constant contact and interaction with the mainland,” pro-establishment lawmaker and prominent business figure Michael Tien told AFP.

“He is a man who has stood the test,” Lai told AFP. “If he really wants something done, he will try his best to tackle the obstacles.”

Lee represents a sea-change from the four chief executives who have run Hong Kong since its 1997 return to Chinese rule — all former business figures or administrators from the civil service.

Lee spent 35 years in the police before jumping to the government in 2012, followed by a swift rise to the top via what local media have dubbed “a platinum elevator”.

But law and order remained his portfolio, serving in the Security Bureau and then leading it before becoming the city’s number two official last year.

Chien-yu Shih, an expert on Chinese security issues at Taiwan’s Institute for National Defense and Security Research, said he believed Beijing started paying attention to Lee after the 2019 democracy protests.

Those huge and sometimes violent rallies were a popular expression of anger by Hong Kong residents at their lack of say in how their city was run.

Demonstrations organised by students, teachers, unions, medics and even civil servants were some of the biggest Hong Kong had ever seen.

But the Chinese government portrayed the protests as a foreign-backed plot run by “terrorists”, a stance Lee embraced.

Lee, a Catholic, grew up poor in Sham Shui Po — to this day one of Hong Kong’s most working-class districts — but made his way to an elite boys’ school run by Jesuits.

Peter Lai, a former banker and classmate, described him as a clever and fashionable teenager who grew long hair and wore flared trousers.

Lai said he believed his old friend would be a good leader for the city.

Another contemporary, who asked not to be named, was less complimentary, describing Lee as more of a dilettante who liked “chasing after girls and going to parties”.

Most of his contemporaries went to university, but Lee turned down an offer to study engineering to join the police.

He later told a pro-Beijing newspaper he was motivated by being bullied by neighbourhood hooligans.

Lee has not spoken much about his family and has dodged questions about whether they still hold British nationality, something he renounced when he joined the government.

Given his security background, it seems unlikely Lee — already sanctioned by the United States — will reverse Beijing’s campaign against dissent.

Where he will enter less familiar territory is the world of business, an area where Hong Kong is suffering.

Hong Kong, once a vibrant, multicultural business hub, has been cut off internationally during the pandemic as it hews to Beijing’s strict zero-Covid strategy.

Ex-security chief Lai said he believed Lee had the “wisdom and faith” to balance China’s demands that the coronavirus be kept at bay with maintaining the economy.

He recalled how Lee’s nickname in the security bureau was “Yip Man”, the name of a famous Chinese kung fu master but also a homophone in Cantonese for someone who “asks about every page”.

Danny Lau, a small business association leader, said Lee was not an ideal candidate but that he would reserve judgement.

“I hope he can consider Hong Kong’s international competitiveness and does not waste time on making laws unhelpful for the city’s economy,” Lau told AFP.

But others say Lee’s appointment confirms that China now puts Hong Kong’s political security ahead of business and livelihood issues.

“In the past, China might compromise for some economic benefits,” Charles Mok, a former pro-democracy lawmaker now living overseas, told AFP.

“But now it seems Beijing wants its people to feel that the world is full of threats and it’s only safe to stick closely to the (Communist) Party.”